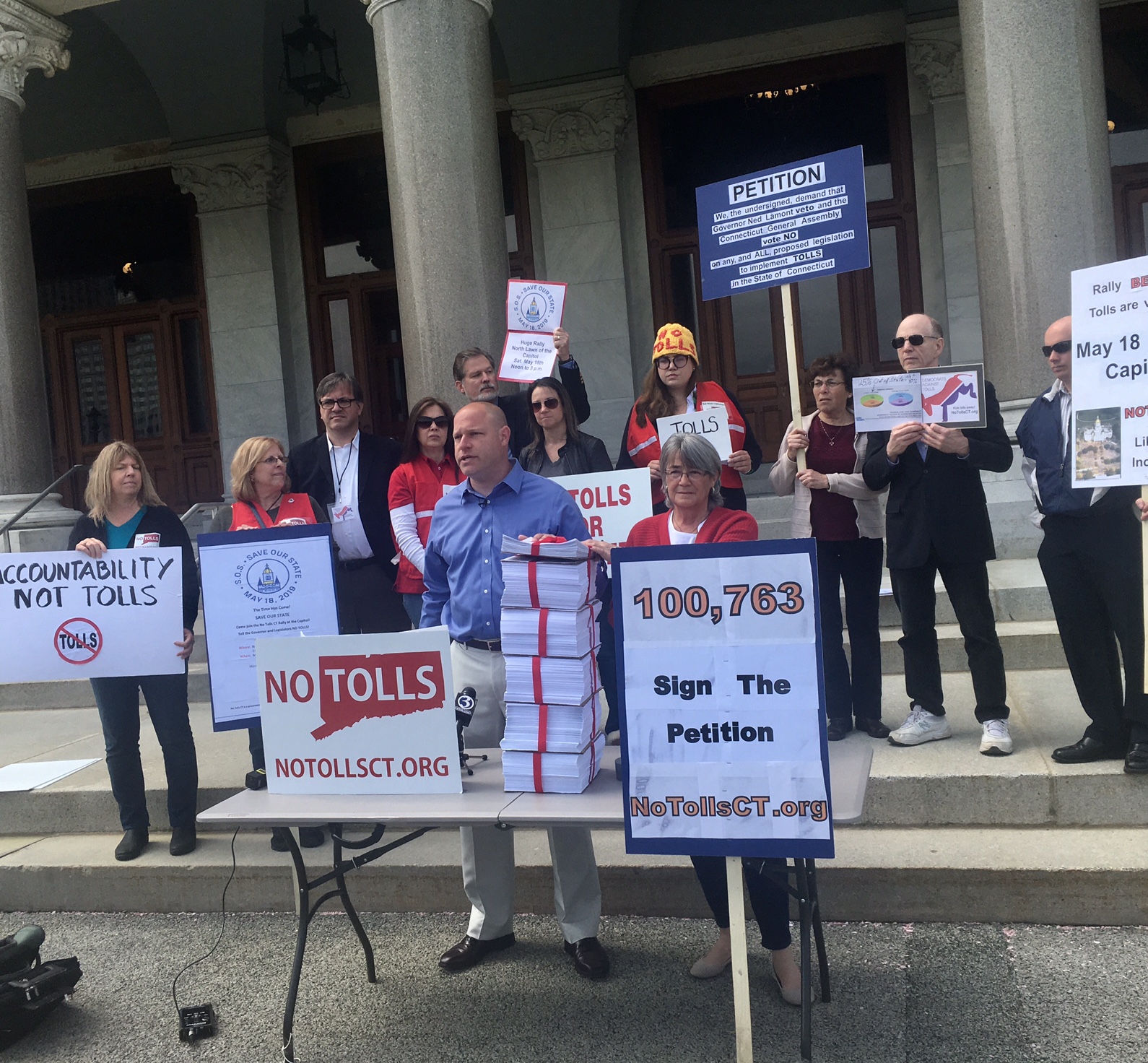 No Tolls CT, a grassroots organization opposed to plans by Gov. Ned Lamont and Democrat leaders to put tolls on Connecticut’s highways, delivered a message to the governor today – actually, they delivered about 100,000 messages.

Patrick Sasser and a small group of activists presented petition signatures from Connecticut residents opposing tolls to the press and then brought them to the governor’s office during a raucous day at the Capitol as lawmakers in the House debated and passed a $15 minimum wage bill.

“We’re encouraging the governor and the rest of the lawmakers who are still working in the building this session to hear our voices loud and clear: the people of Connecticut have had enough,” Sasser said. “Adding these tolls on the highway is adding another layer of tax onto the working class, the working poor, the people who are just trying to get to work every day.”

Lamont was not at the Capitol, but Sasser and other members of No Tolls CT were greeted by Lamont’s Chief of Staff Ryan Drajewicz who took the petition signatures and said he hoped the governor’s office and No Tolls CT could reach an understanding.

Sasser and two other members of No Tolls CT were brought into the office for a private meeting with Drajewicz.

“The current toll proposals will be a huge cost burden on small businesses in Connecticut,” Sculley said. “In a state that is struggling with small, medium and large-sized businesses, this is going to affect all of them, but particularly small businesses, the hardest.”

Sculley said the trucking industry won’t be able to absorb the added cost of tolls and the expense will be passed down to consumers, driving up the price of goods in the state. He added that one of his members estimated tolls would actually double their tax burden in a single year.

Don Shubert, president of the Connecticut Construction Industries Association, which recently spent $900,000 on television advertisements supporting tolls, said he thinks No Tolls CT is “doing a wonderful job with their campaign.”

“The thing we have in common is we’re both trying to get the best deal for Connecticut taxpayers,” Shubert said. “We’re just approaching it from two different ways.”

Shubert said the state needs $700 million per year just to maintain its roads and bridges and that it would be better to collect some of that revenue from out-of-state drivers.

“For us, these taxes are part of doing business and we will adjust to the business climate,” Shubert said. “What we’re really after is a growing Connecticut. Our members are working in Massachusetts, working in New York and Rhode Island, but there hasn’t been work in Connecticut in ten years.”

Sasser said people in Connecticut don’t want tolls and that it is incumbent upon legislators to figure out how to balance infrastructure needs with the revenue they already have.

Sasser said his organization was grassroots and that if he had funding like the Connecticut Construction Industries Association he would have a million signatures to bring to the governor.

“We want to make sure that our message gets heard in this building loud and clear,” Sasser said. “These are elected official who are put in those positions by us, the voters, by us, the taxpayers, not special interest groups, not groups that can spend up to a million dollars to buy ads and publicity and all these things.”

“They need to be listening to the taxpayers, the working class, the working poor, the people that are struggling to try to survive in this state,” Sasser said.

No Tolls CT is holding a rally at the Capitol on Saturday, May 18.