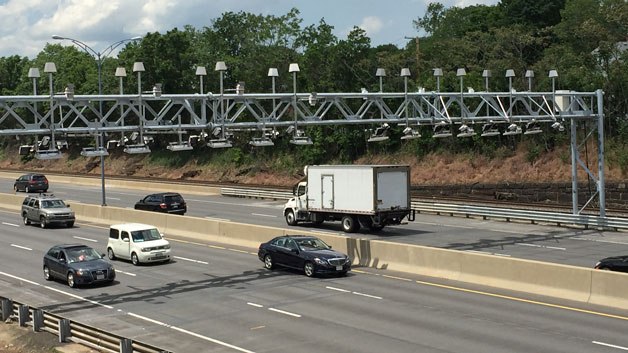 During an October 29 hearing before the Freedom of Information Commission, an attorney representing the Office of the Governor said the department was not in possession of specific data supporting the administration’s revenue claims for truck-only tolls.

Former Sen. Len Suzio, R-Meriden, who served on the Transportation Committee, filed a Freedom of Information request shortly after the Lamont administration presented revenue estimates for truck-only tolls to the public in December 2019.

The Governor’s Office and the Department of Transportation estimated an average toll of $8 per truck on bridges would bring in $187.1 million per year and would be used to finance transportation projects with the help of federal infrastructure loans.

Although the administration published revenue estimates for tolling trucks on Connecticut bridges, Suzio sought the underlying data to support those figures.

Suzio filed his FOI request in December 2019 and did not receive the data until February 2020, after he had filed a complaint. The data he received did not account for eight dollar truck tolls but rather a wide array of different toll rates.

“No responsible leader would use financial projections without having the data to support the numbers,” Suzio said in an October 30 press release. “Today I heard in sworn testimony from the Governor’s staff that they do not have the documentation to support the claims and projections provided by Governor Lamont to the media and the public.”

During the hearing before the Freedom of Information Commission, Miller said that he provided Suzio with all the documents possessed by the Office of the Governor, but the supporting figures and calculations may be in the possession of the Department of Transportation or the Office of Policy and Management.

Suzio had filed an FOI request with DOT but did not file a complaint against the department.

“There’s meetings with OPM, there’s meetings with DOT, they’re briefing [Gov. Lamont], providing the information, but I don’t know that they go in with all the Excel spreadsheets,” Miller said. “He’s kind of getting the executive summary and then whatever questions he has I’m sure get answered.”

“We provided everything we had,” Miller said.

Emails provided to Suzio show the Governor’s Office was in contact with DOT and OPM regarding the truck tolls and calculating the underlying revenue numbers.

In an email chain starting on December 2, 2019 OPM Secretary Melissa McCaw asked DOT to “provide the blended rates for the $8.00 average” with a possible $20 charge for the Gold Star Memorial Bridge.

Chief of Policy and Planning for DOT Thomas J. Maziarz responded they had received gross revenue estimates from the consultant and were working on getting the net revenue estimate the following day.

“The initial results are promising,” Maziarz wrote. “We believe that when we make all the needed adjustments, the net annual revenue will increase from the previous $180 million to at least $190 million.”

Lamont and fellow Democrats put the tolls issue to rest in late 2019 after neither legislative chamber could muster the will to vote on the measure.

Thus far, statements from both Lamont and out-going Speaker of the House Joe Aresimowicz, D-Berlin, indicate there is little political interest in pursuing the matter further, but some Senate Democrats have continued to push the issue during the 2020 campaign season.

Suzio lost his bid to win back his seat from Mary Dougherty Abrams, D-Meriden.