Connecticut FMLA bill would give $12,000 to care for “third cousin, once removed” 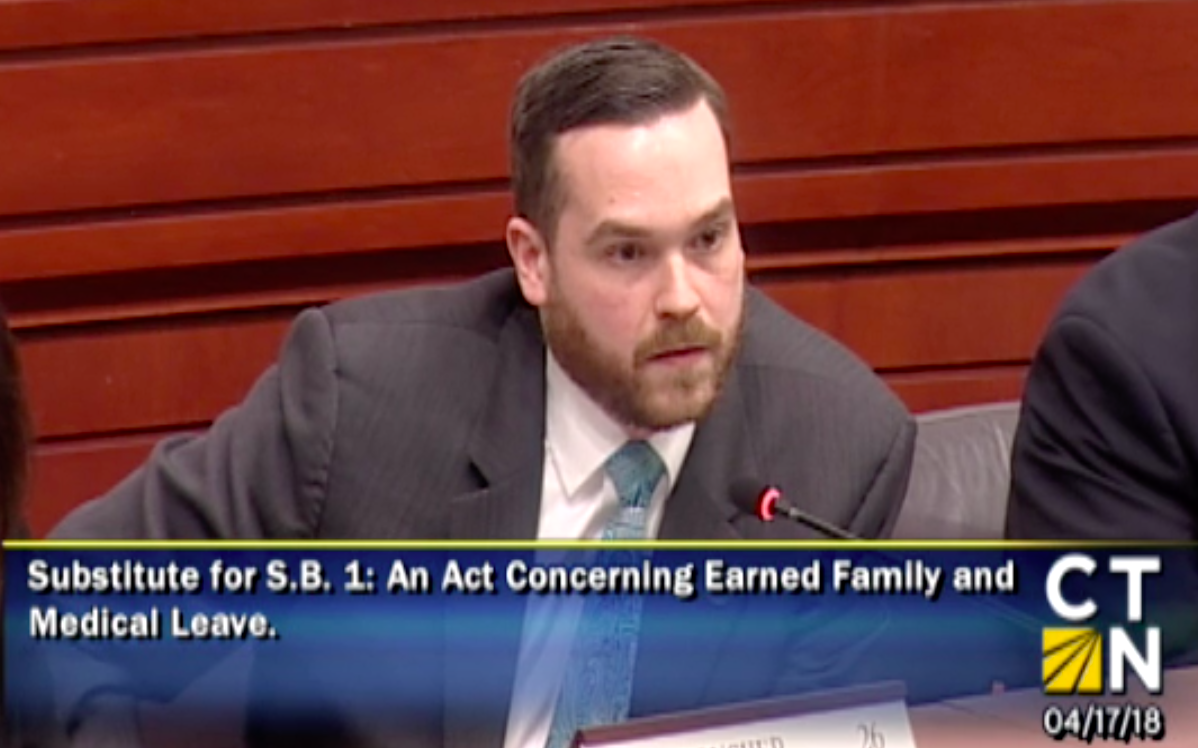 Connecticut’s proposed family medical leave program would cover employees who wish to visit their “third cousin, once removed that had some kind of family medical issue,” according to an exchange between Representatives Christopher Davis, R-Ellington, and Jason Rojas, D-East Hartford at a Finance, Revenue and Bonding Committee meeting last week.

The Connecticut program would extend FMLA guidelines to allow employees to take up to 12 weeks of leave time and $1,000 per week to care for any blood relative or friend who is considered family.

According to the bill, an employee can use their FMLA time to care for “a sick sibling, son or daughter, grandparent, grandchild, parent or any other individual related by blood or whose close association with the employee is the equivalent of a family member.”

Federal FMLA guidelines are limited to immediate family and only apply to companies with 50 or more employees. The Connecticut legislation would extend to any company with two or more employees and allow medical leave to care for virtually any family member, prompting Davis’ question regarding a “third cousin, once removed.”

Critics of the program, such as the Connecticut Business and Industry Association, say the program will not only hurt small businesses but be ripe for fraud and abuse by both employees and employers.

Eric Gjede of CBIA says the bill will put employers at a severe disadvantage when employees take leave because there is no way to challenge the legitimacy of a claim.

“How would they [employers] ever question an employee’s relationship with someone?” Gjede said, adding that employers could not require a doctor’s note or any kind of documentation for the illness of a distant relative.

“You’re also going to get into some potential HIPAA issues if you’re now allowing this leave to be taken for just anyone,” Gjede said. “Now you’re going to have to be sharing people’s medical information with your employer for an expanded number of people.”

Gjede also said that small employers could essentially game the system by hiring family members for a minimal amount of time and then allowing them to take leave and collect payment.

Under the terms of the bill an individual will only need to be employed for six months and have worked 500 hours in order to receive the benefit.

But the bill also allows sole proprietorships to opt-in to the paid leave program, although they have to have been in business for three years in order to qualify.

“Under that scenario,” Gjede said, “if you determine that your business is not doing particularly well or you’ve decided to close up shop, you could also claim at the same time that you’re now taking medical leave and basically get paid for an additional twelve weeks.”

Rep. Davis noted that an employee could potentially use their protected FMLA time to take 12 weeks of leave, and then use any additional sick time or vacation time allowed by their employer.

The potential for abuse or fraud may create unanticipated strains on the trust fund, which may face funding issues from inception due to the low employee contribution and high payout.

Under the proposed framework, an individual making the state median income of $73,433 would pay $367.16 annually, but be eligible for $12,000 in benefits every year.

The Department of Labor will act as the administrator for the program and will oversee FMLA claims made to the state to ensure they meet statutory guidelines.

The legislation indicates that DOL can request documents and call witnesses in a disputed case in order to determine eligibility. The DOL will have to hire additional attorneys and staff to oversee the program which will affect over $1.2 million employees.

Although state and municipal employees, including teachers, would be excluded from the program, the OFA notes public employees could potentially opt-in to the program through collective bargaining agreements.

The bill also comes with a hefty fiscal note. The OFA estimates the program will cost $13.6 million to start, which will be covered by a $20 million bond. Once the program begins, it will cost “at least” $18.6 million per year in administrative costs.

“A paid family medical leave bill like this one is, in concept, a wonderful, wonderful one that we wish we could deliver to the people of Connecticut,” Frantz said. “The only problem is this is coming with a huge fiscal note.”

Frantz added that there is no evidence the program would be able to pay for itself going forward and that it should be looked at in the future in a “much more rational” way to ensure that it would succeed in Connecticut.