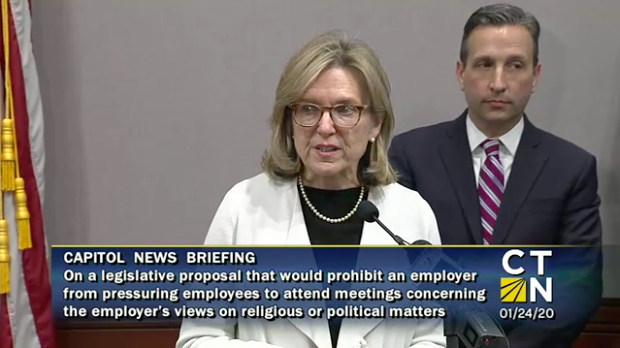 At a press conference Friday, Senate Democrats announced plans to once again try to pass legislation limiting what employers can talk to their employees about during mandatory meetings – known as “captive audience” legislation.

Senate President Pro-Tem Martin Looney, D-New Haven, said the legislation would address “certain coercive tactics that employers take against employees who may be communicating or engaged in a campaign to unionize.”

“The Supreme Court defines [freedom of speech] as the right not to have to listen to coercive speech,” Kushner said. “Unfortunately, those rights don’t extend to the workplace,” Kushner said.

Kushner said they will work on a bill to allow employees to leave a mandatory meeting called by their employer if they deem that speech to be “coercive” regarding politics, religion or unionization efforts.

Kushner said that based on her experience in union organizing it can feel “very, very coercive” for employees to be called into a meeting with their employer to hear his or her position on unionization efforts.

This would mark the third year in a row Democrats have tried to pass captive audience legislation, something supported amply by labor unions and opposed by business and hospital associations in the state.

Prior bills were shot down after Attorney General George Jepsen issued opinions in 2011 and 2018,  saying the proposed law was preempted by the National Labor Relations Act, which sets the laws and standards for how employers and employees can interact.

Former members and chairmen of the National Labor Relations Board have also offered testimony in the past indicating that the proposed laws in Connecticut would be preempted by the NLRA and potentially open Connecticut up to a lawsuit.

However, with the 2018 election of William Tong – who was heavily supported by the state’s labor unions and was supportive of captive audience legislation as a representative – as Attorney General, Democrats and labor unions made another attempt during the 2019 legislative session.

Tong issued a 2019 opinion somewhat at odds with Jepsen’s previous opinions but said the state would likely face a court challenge which it would defend in court.

The 2019 bill was passed out of the Joint Committee on Judiciary but was never brought for a vote in the Senate.

Looney said Tong’s new opinion is spurring them forward with pursuing the legislation. “We have a new opinion from Attorney General Tong that sets out a path in order to pass this legislation in a way that he believes would be constitutional,” Looney said.

The National Labor Relations Act makes it illegal for employers to threaten employees with punishment for engaging in unionization efforts.

However, the NLRA also protects the freedom of speech for employers, ensuring they can meet with their employees during work hours to discuss matters which may affect the business.

In a 2019 letter to the Connecticut Business and Industry Association, former NLRB Chairman Philip A. Miscimarra wrote, “The legislation would likely be declared invalid and unenforceable because it is preempted by the NLRA, and the legislation may also be deemed an unconstitutional restriction on free speech and the free exercise of religion.

Looney said the bill would go before the Judiciary Committee and possibly the 14-member Labor Committee, which contains six senators or representatives who are former union officials.

“There is no need for employers to herd their employees into a coercive meeting,” Looney said.