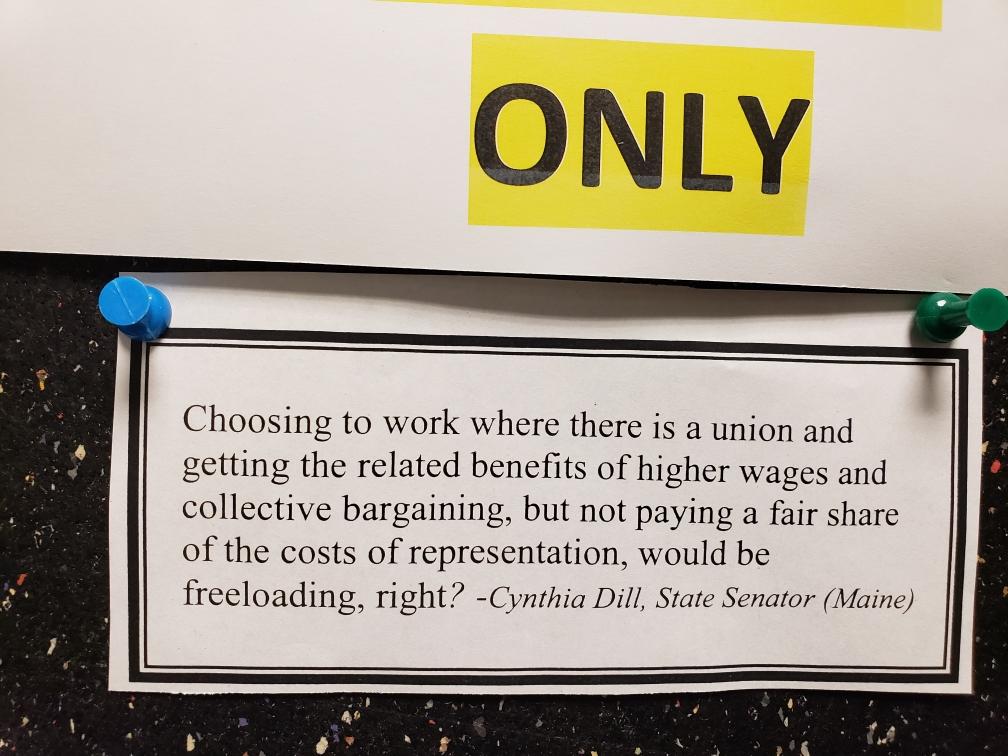 Two liquor control agents have filed a complaint with the Connecticut State Labor Relations Board alleging the Administrative & Residual Employee Union 4200 and the Connecticut Police & Fire Union are using the state-provided union bulletin board to harass them.

Erik Gagne and Barry Wallett filed the complaint after messages were posted to the bulletin board that said working at a job where there is a union but not joining the union is “freeloading.”

Both Gagne and Wallett resigned from the union following the 2018 Supreme Court decision in Janus v. AFSCME that ruled public sector workers could no longer be forced to pay union fees as a condition of employment. The court determined the fees violated public sector employees’ right to free speech.

According to the complaint: “Since at least December 2018, one and/or both of the Respondent Unions have posted, and the State of Connecticut has allowed to remain posted, material on the state-provided bulletin boards that is intended to and does in fact harass and intimidate public employees who are not union members, discriminating against them on the basis of their union membership status.”

The message in question – a quote from Maine State Senator Cynthia Dill – was reportedly posted on union bulletin boards on multiple floors of the Connecticut State Office Complex in Hartford.

“Choosing to work where there is a union and getting the related benefits of higher wages and collective bargaining, but not paying a fair share of the costs of representation, would be freeloading, right?” the posting the bulletin board read.

Union bulletin boards are supplied by the employer – in this case, the Connecticut Department of Consumer Protection, which is also listed in the complaint – for unions to post information and announcements.

But according to A&R’s contract with the state, the bulletin board “shall not be used for material that is of a partisan political nature or is inflammatory or derogatory to the State employer or any of its officers or employees.”

The Supreme Court decision in Janus v. AFSCME asserted that because labor unions insist on being the exclusive representative of employees in a workplace they must represent all employees equally regardless of union membership status or fees paid to the union.

“Nor can such fees be justified on the ground that it would otherwise be unfair to require a union to bear the duty of fair representation,” Justice Samuel Alito wrote in Janus v. AFSCME. “That duty is a necessary concomitant of the authority that a union seeks when it chooses to serve as the exclusive representative of all employees in a unit.”

In a posting on their website, A&R labeled the complaint “bizarre” and “frivolous” claim by two non-union employees.

“The action against us, which we believe to be utterly frivolous, is being led by a national right-to-work group and was filed by a State Representative on behalf of two state employees not connected to A&R,” the website posting said.

Although Connecticut’s public sector unions have downplayed the effect of the Janus ruling – even growing their numbers by unionizing more groups of employees – references to those who either didn’t join or left the union have been less than complimentary.

We have 1,218 members and zero deadbeat freeloaders.

Both the A&R union and the CT SVFT union are affiliates of the American Federation of Teachers.

A&R also faces a federal lawsuit after union president John DiSette told two employees they were not allowed to attend the union holiday party because they were no longer union members but still had to pay dues to the union.

Gagne and Wallett are asking the labor relations board to order the removal of the posting, make orders that prevent similar postings in the future and order that the bulletin board post a message, informing union members of their right not to be part of the union.

They are represented by attorney and State Representative Craig Fishbein, R-Wallingford, and The Fairness Center, a nonprofit legal foundation that represents public sector employees who have been mistreated by their union.