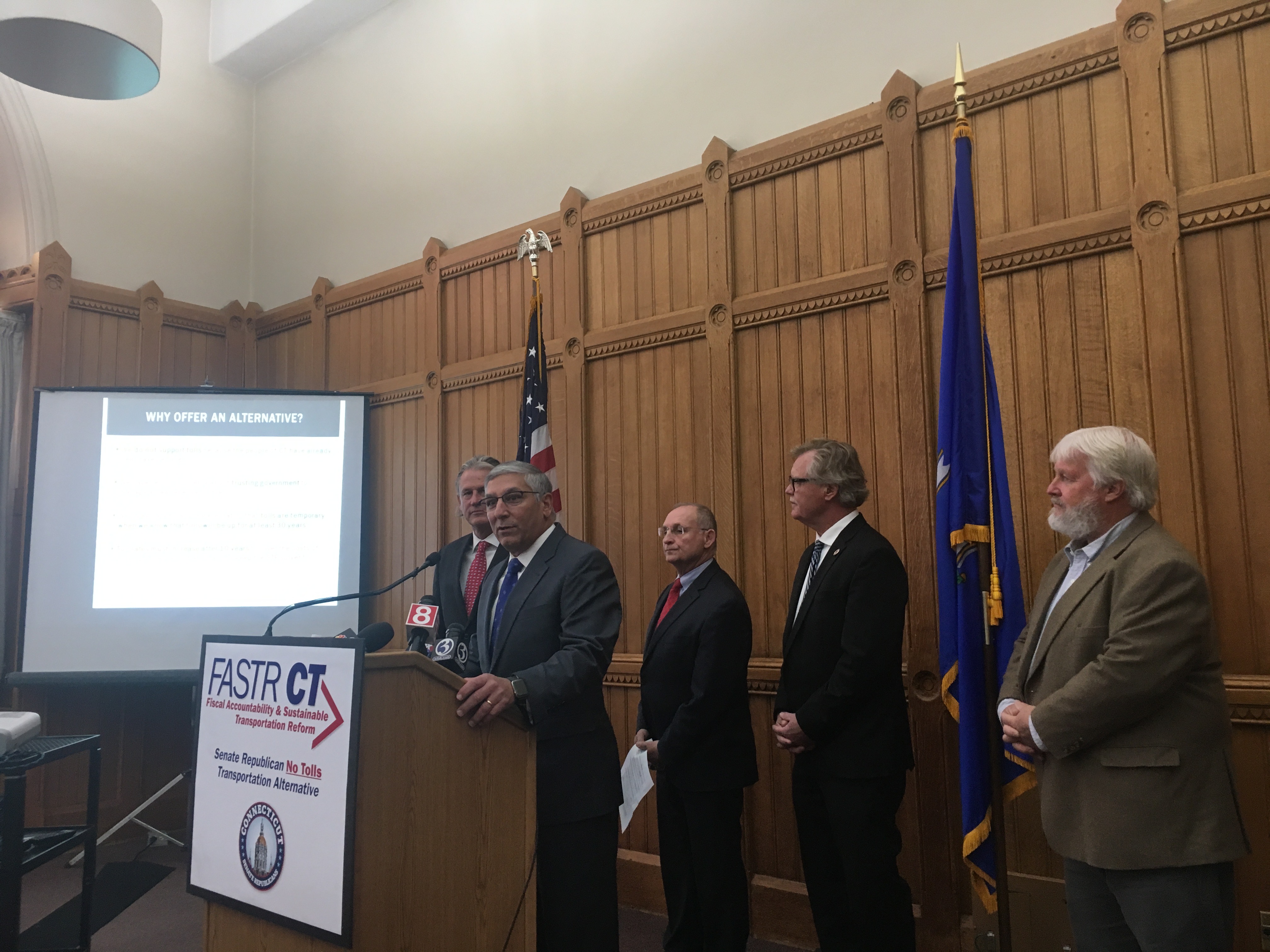 Senate Republicans unveiled their latest transportation funding plan which would use $1.5 billion from the state’s Rainy Day Fund to pay off pension debt and remove pension payments from the Special Transportation Fund, thereby freeing up money to leverage federal loans.

The state would continue to issue $100 million in General Obligation bonds to pay for transportation projects.

The $18 billion plan uses several aspects of Gov. Ned Lamont’s CT2030 plan, including low-interest federal loans supplied by the Build America Bureau and the specific projects listed by Lamont, but will not use tolls as a revenue source.

Lamont’s plan was rejected by Senate Democrats following a caucus meeting with the governor on Wednesday, primarily due to the tolls issue. Lamont said he was willing to listen to any alternative plans.

Senate Republican Leader Len Fasano, R-North Haven, said they were offering this plan because “we simply cannot support tolls,” because the tolls would likely not be removed and toll rates would have to rise with inflation.

“This plan takes what he [Lamont] wants to do and figures out a way to pay for it,” Fasano said. “We use his ideas.”

Fasano said that paying down the pension debt “is a great investment in ourselves,” noting that Connecticut’s massively underfunded State Employee Retirement System drives up the fringe benefit costs for nearly every aspect of state government.

Fasano likened using the Rainy Day Fund to pay down pension debt as using a low-interest savings account to pay off a high-interest credit card, but the idea may not sit well with some as fears of another recession in the next few years continue to loom over the Capitol.

Connecticut currently has $2.5 billion in its reserve fund and Lamont has resisted calls by different organizations such as The Alliance of nonprofit groups and Connecticut Voices for Children to release some of those funds.

“While I appreciate Senator Fasano’s proposal to partially fund much-needed infrastructure investments, taking money out of the Rainy Day fund is a risky proposition that requires serious evaluation,” Lamont said in a press release.

State Comptroller Kevin Lembo has pushed for years to have a 15 percent budget reserve. The Comptroller’s Office did not return request for comment yet.

Fasano recognized that use of the state’s reserve funds might not look good, but that even with the draw-down the state will have $1.2 billion in 2020 – enough to weather a recession — and eventually build its savings back up to $2.5 billion by 2024.

State statute allows the budget reserve fund to be used to pay for long-term unfunded liabilities if the reserve fund equals more than 5 percent of General Fund appropriations for the current fiscal year, but it would require a vote by the legislature.

Removing pension debt from the Special Transportation Fund will free up $113 million per year and the lowered debt service payments will make money available to back the federal loans.

Don Shubert, head of the Connecticut Construction Industries Association and Move CT Forward – which has lobbied for Lamont’s transportation plans – said he is glad to see that lawmakers are having the debate.

“I think that it’s very encouraging to see transportation in Connecticut in a discussion at this level,” Shubert said. “I think these are more detailed and comprehensive plans than we’ve seen in Connecticut. I think they’re having a hard discussion on how to pay for the transportation systems and I think everyone in this building has to very seriously look at these plans and consider them on several different items.”

Shubert said lawmakers and the public should look at both Lamont’s CT2030 plan and the Senate Republicans’ plan and consider how they will affect commute times, safety, providing a long-term dedicated funding source.

“We’re hoping that the legislature, every legislator, will look at these plans, consider those things and maybe even consider a few more things we’re not thinking about right now and arrive at a transportation plan that takes advantage of innovative financing, that does a lot of these new things,” Shubert said.

Patrick Sasser, head of No Tolls CT, issued a statement saying he saw the plan as a positive step toward reaching a bipartisan solution that doesn’t involve tolls or new taxes.

“We’re glad to see a transportation plan that doesn’t rely on instituting another tax on the people of Connecticut with tolls and one that removes pension payments from the Special Transportation Fund, something No Tolls CT has advocated for,” Sasser said. “We see this plan as a good step toward reaching a bipartisan solution that doesn’t levy another tax on the working people of Connecticut.”

According to the Senate Republicans’ presentation, revenue to the STF would grow to $2.3 billion by 2030 but expenditures would decrease, leaving surpluses every year ranging from $279 million in 2023 to $96 million in 2030.

Fasano said their figures have been reviewed by the Office of Fiscal Analysis.

“There’s another way of doing transportation that is meaningful, sustainable, affordable, with the oversight that is required moving forward and bring the trust I think taxpayers are looking for in transportation,” Fasano said.

Republicans previously pushed their Prioritize Progress plan, which prioritized state bonding to pay for infrastructure projects, but their plan was never brought before a legislative committee.

This article was updated with a statement from Gov. Ned Lamont.