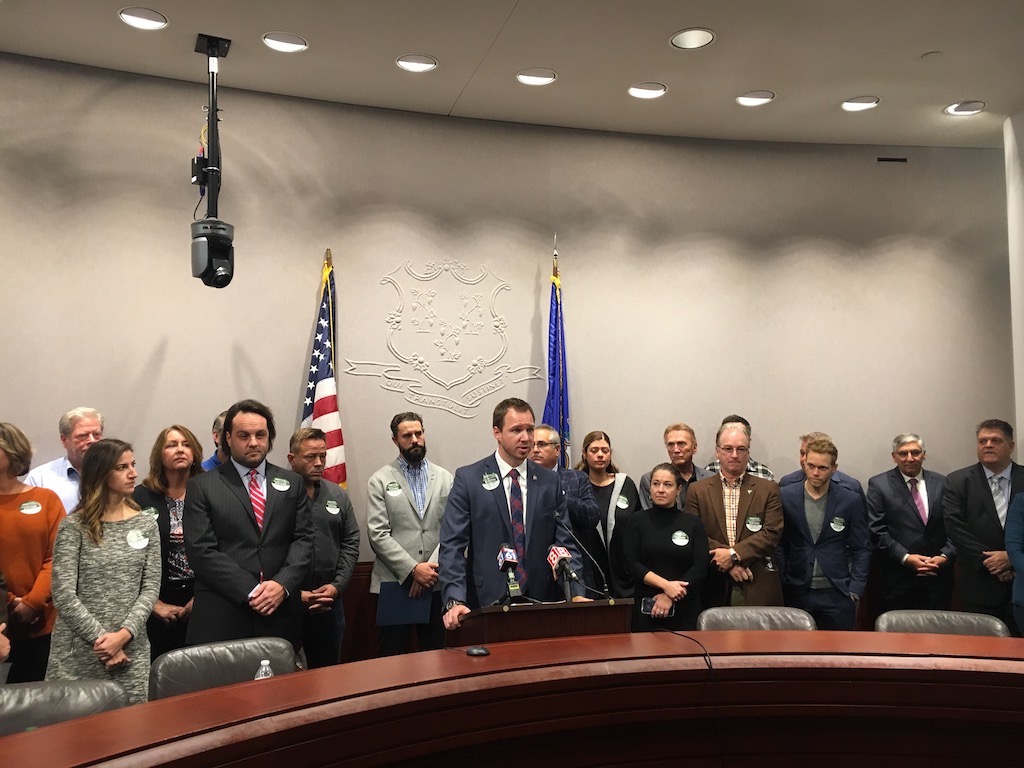 A joint public hearing before the Judicial and Labor and Public Employees Committee was held at the Capitol today to consider a working draft bill to change state regulations regarding wages for restaurant servers.

The push for a regulatory change is a response to a series of on-going lawsuits against restaurants in Connecticut that threaten to shutter some popular eating establishments.

The lawsuits claim restaurant owners were under-paying their employees by applying a tip-credit – which allows them to pay less than the minimum wage – for non-tipped work like setting up the restaurant before service and cleaning up afterwards.

Restaurant owners say they were merely following guidance issued by the Connecticut Department of Labor which said restaurants could use the tip credit as long as the service worker spent at least 80 percent of their time performing work for which they would receive a tip – known as the 80/20 rule.

But DOL’s guidance ran counter to state regulatory language. The discrepancy resulted in fifteen lawsuits being filed on behalf of former restaurant workers – some of them class action suits – which threaten millions in damages and attorney fees.

Lawmakers from both sides of the aisle passed a bill amendment during the final hours of the legislative session that would have retroactively made DOL’s guidance state law and ended the lawsuits, but Gov. Ned Lamont vetoed the legislation, prompting a push for a special session to pass a final fix.

At a press conference packed with restaurant owners held prior to the hearing, President of the Connecticut Restaurant Association Scott Dolch said it has been working with lawmakers on both sides of the aisle to craft this compromise bill to give restaurant owners and workers a “clear and reliable set of rules to work under.”

“This bill is a compromise that we have worked on for many weeks with legislative leadership and the governor’s office,” Dolch said. “The compromise being heard before the committees today would set the state on a path to clarify our laws and regulations relating to restaurants and their employees.”

Dan Meiser, chairman of the board for the Connecticut Restaurant Association and owner of three restaurants in Mystic, said the new bill should be passed to prevent restaurants from closing under the weight of the lawsuits.

He noted that there are over 8,000 restaurants in the state who employee 119,000 people generating $8.2 billion in sales per year.

We’re asking legislators today to please support our industry and our restaurant families and to support this legislation. The consequences of not doing so will be closure of more restaurants across Connecticut and the loss of jobs.

Dan Meiser, chairman of the board for the Connecticut Restaurant Association

“We’re asking legislators today to please support our industry and our restaurant families and to support this legislation,” Meiser said. “The consequences of not doing so will be closure of more restaurants across Connecticut and the loss of jobs.”

The working draft bill — LCO 11202 — would direct the DOL to repeal the current tip-credit regulation and replace it with language that reflects current practice and would limit the amount of penalties that could be levied against restaurants if they were acting in good faith by following DOL’s guidance.

It would also require plaintiffs in a class action suit to demonstrate they were individually affected by a restaurant’s actions.

But the proposed changes did not sit well with union leaders, who held their own press conference flanked by Rep. Robyn Porter, D-New Haven, Rep. Michael Winkler, D-Vernon, and Rep. Anne Hughes, D-Eastont, all members of the Progressive Caucus in the House of Representatives.

Sal Luciano, president of the Connecticut AFL-CIO, said the changes will limit workers’ ability to bring a lawsuit if they are underpaid by their employer and worried that changing Connecticut’s regulations might leave workers open to abuse as the federal government has loosened wage-tip credit regulations at the national level.

Luciano said the U.S. Department of Labor found that 83 percent of restaurants had “short-changed their workers.”

“This draft closes only one class of worker to not be able file class action lawsuits to recover wage theft,” Luciano said. “In addition, it takes away their ability to go to court at all since in many cases it would not pay attorney fees. Who can pay an attorney a few thousand dollars to recoup a hundred dollars that was stolen from them?”

James Bhandary-Alexander, staff attorney at the New Haven Legal Assistance Association, said the regulatory changes proposed in the bill would part of a “death by a thousand cuts,” for restaurant workers.

Most restaurant workers in Connecticut are not unionized, but labor leaders have praised the governor’s veto and been vocal in their opposition to any regulatory changes that might affect the on-going lawsuits.

The press conference was used as not-so-subtle push toward unionizing restaurant staff.

Kimberly Davis, a server at the Hilton and union member of UNITE HERE Local 217, said the union protects her from being underpaid. “I have been extremely fortunate to have the protection of the union and a collective bargaining agreement,” Davis said of her job at the Hilton. “This is the only job where I have not had to face things like wage theft.”

During the hearing, Democratic lawmakers pushed for the Connecticut Department of Labor to include restaurant servers in crafting the new regulation if the bill is passed, leaving an opening for unions like the AFL-CIO to weigh in on the crafting of new state regulations on behalf of restaurant workers.

CT DOL Commissioner Kurt Westby testified in support of the working draft bill and Republicans are backing the change, but Democratic members of the House Progressive Caucus appeared to signal opposition, despite voting for the original bill that was vetoed by Lamont.

Political divisions over the wages paid to restaurant servers were obvious during the public hearing as Democrats pushed back against the Department of Labor and the Connecticut Restaurant Association.

Democratic opposition to the drafted bill came largely from members of the Labor and Public Employees Committee who said the original bill passed during the last hours of session should have gone through the committee process.

However, according to the Legislative Clerks Office, House Democrats brought the new compromise bill forward to be drafted.

The original bill was also championed by House Speaker Joe Aresimowicz, D-Berlin, who wanted to override the governor’s veto.

Barry Jessurun, co-owner of 85 Main in Putnam — one of the restaurants facing a class action lawsuit – said during the press conference that restaurants were merely following the guidance given by the CT DOL.

“I think you can plainly see the challenge facing restaurants,” Jessurun said. “Restaurants across the state are being accused of not segregating time to tip servers while performing non-service duties but the regulatory and enforcement agency gave the industry advice to the contrary.”

Jessurun said the average tipped worker in his restaurant earns over $40 per hour, while Dolch said the average server in the United States earns $25 per hour through a combination of base pay and tips, although he says the wage in Connecticut is likely much higher.

The working draft bill has yet to be finalized and no special session has been scheduled before the beginning of the legislative session in February 2020.