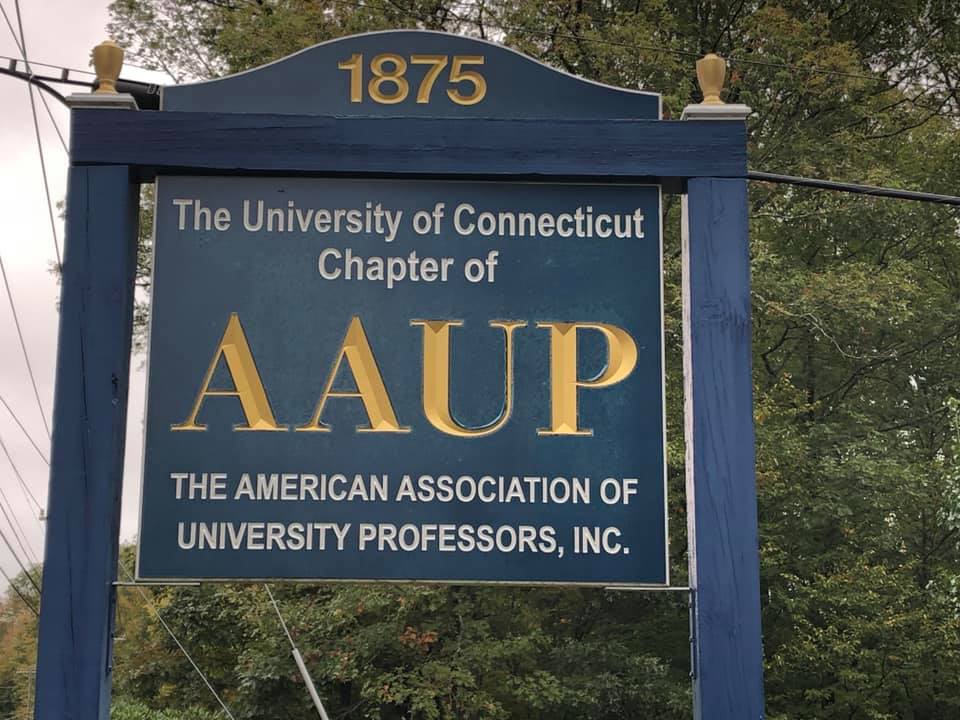 The union representing professors and faculty at the University of Connecticut say state lawmakers should reject tax cuts and instead fund state employee raises, according to a message posted to the union’s Facebook page.

“We start 2022 with a University administration with a balanced budget, and the state, so flushed with cash, that it has met its maximum contributions to the Rainy Day Fund,” wrote UConn-AAUP President Mary Ellen Junda, Executive Vice President Jeffrey Ogbar and Executive Director Michael Bailey.

“Some state lawmakers are so convinced that the state’s coffers are excessively bloated that state revenue should be reduced with tax cuts, rather than give state employees a raise,” the post says. “Specifically, UConn-AAUP members have gone six of the last 12 years without a raise.”

Like most of Connecticut’s state employee unions, the UConn chapter of the American Association of University Professors is engaged in contract negotiations with management.

The union states that UConn’s latest offer was a 2.75 percent pay increase over three years.

However, the union called the offer “parsimonious,” as inflation is growing at an annual rate more than double the offered raise, resulting in a “net pay reduction between 10% – 15%,” the union officials wrote.

Although union negotiations are generally kept behind closed doors, UConn-AAUP posts the proposals and counter proposals on their website.

UConn-AAUP’s proposal as of November 2021 is a 5 percent general wage increase retroactive to August 2021 for all members with additional increases depending on how long members were part of the bargaining unit.

The union then proposes additional general wage increases tied to inflation beginning in August of 2022.

Unionized state employees – including UConn-AAUP members – received raises and annual step increases in 2019 and 2020 that amounted to an 11 percent increase in pay, the second round of which came during the COVID pandemic when hundreds of thousands of residents were out of work and state officials were unsure as to how the pandemic would affect tax revenue.

It was also during a time when UConn moved classes online and had to contend with a $50 million budget deficit. The professors’ union was unwilling to delay their second scheduled pay increase, which amounted to roughly $20 million.

UConn received nearly $400 million in appropriations from the Connecticut state government in 2021, with additional support for debt service, according to the Board of Trustees annual financial report.

Connecticut’s coffers have swelled, most notably thanks to federal COVID relief dollars that have flooded into the state and eliminated a projected budget deficit. The state has also seen increased income tax and sales tax revenue over the past year resulting in a surplus of $2.2 billion, according to CT Mirror.

The increased tax revenue has led to talks of decreasing taxes or increasing tax credits in 2022 by lawmakers on both sides of the political aisle.

Gov. Ned Lamont wants to grant some kind of property tax relief to homeowners, while Republican leaders in the House and Senate have proposed reducing Connecticut’s sales tax rate.

However, surplus revenue from traditionally volatile tax receipts, such as Wall Street earnings, are also used to pay down state employee pension debt, the cost of which have plagued the state budget and UConn’s budget for years and has contributed to the loss of research funding to Connecticut’s flagship university.

Connecticut recently paid off $1.6 billion in pension debt, which will result in savings of $290 million by 2026, according to the Office of Fiscal Analysis. The Comptroller’s Office projects the state could potentially pay down another $1.76 billion, provided the Rainy Day Fund remains full.

The UConn-AAUP officials wrote that the state and the UConn Board of Trustees “can do better than this,” and encouraged their members to reach out to the media, lawmakers and the Board of Trustees.

“The faculty are UConn, and UConn deserves better,” Junda, Ogbar and Bailey wrote.