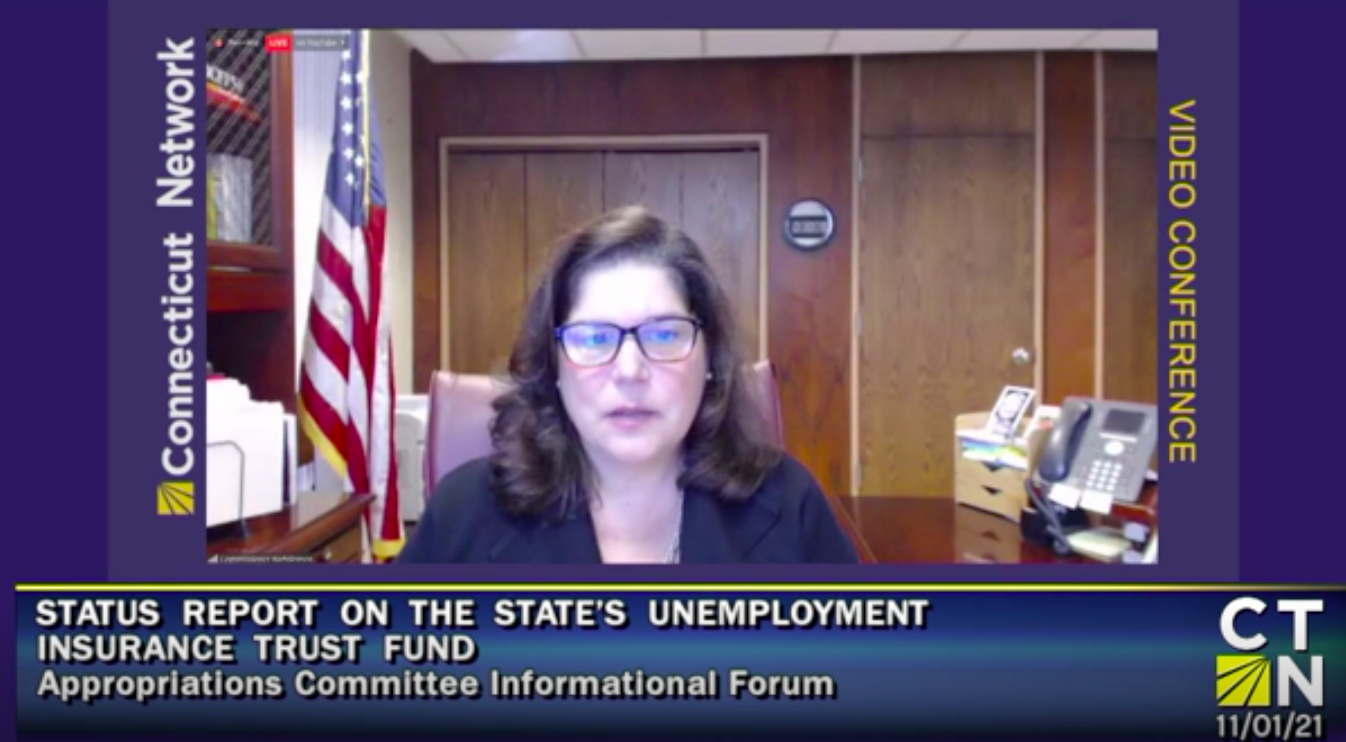 Connecticut borrowed over $700 million from the federal government to bolster its underfunded Unemployment Insurance Trust Fund after the forced closure of businesses during the COVID-19 pandemic put hundreds of thousands of people out of work.

Those borrowed funds will have to be repaid through higher unemployment taxes for Connecticut businesses, but the state can also use federal COVID-relief payments to pay down the debt to relieve some of that burden.

But, according to an exchange between Connecticut Department of Labor officials and the leaders of the legislature’s Appropriations Committee, there is some disagreement over how best to pay off some of that debt.

Acting Department of Labor Commissioner Danté Bartolomeo told the Appropriations Committee Tuesday that DOL was in talks with the Office of Policy and Management to pay down the interest on that debt rather than the principal.

According to Bartolomeo, Connecticut has already paid $200 million out of the unemployment trust fund toward the federal debt, but they feel moving forward it would be better to use the state’s remaining $155 million in ARPA funds to pay down the interest on the remaining debt.

“There’s benefits to using that money in different ways to figure what’s the most impact for that, whether it’s to simply put it in the trust fund or whether it’s to pay interest on the trust fund,” Bartolomeo said. “There’s some analysis we have done about the long-term benefit and that is still being reviewed.”

However, Appropriations Committee Co-Chair Sen. Cathy Osten, D-Sprague, said it was the legislature’s decision as to how the money would be repaid.

“We did the analysis as to whether we would pay off interest or not,” Osten said. “Long-term, by paying down what we owe, creates less interest to be paid. And so, before anyone makes any real decisions, that should come back to the legislature for discussion. You can bring your analysis, we have our analysis, but – just to be really clear – the legislature said that we would be paying down the debt to the government.”

Osten said the legislature’s plan would bring the total debt down to roughly $400 million.

Bartolomeo said she would bring that message to OPM, but that their analysis may differ from the Appropriations Committee’s, adding that there may potentially be “sources of revenue” that can be deposited to the unemployment trust fund.

“We would want to be involved directly in those conversations,” Osten said. “The General Assembly decides where the ARPA funds go. That was decided in a bipartisan piece of legislation that we passed.”

Osten’s co-chair on the committee, Rep. Toni Walker, D-New Haven, underscored that discretion over the use of ARPA funds rests with the legislature.

“This was an issue that came from the Appropriations Committee as we were building the budget that we wanted the funds directly related to the biggest impact for businesses out there and paid off our debt,” Walker said, adding that they would be happy to meet to discuss alternatives. “But this was a bipartisan decision, I will say, this was important, and I want to hold true to the commitment.”

Coming into the pandemic, Connecticut’s Unemployment Insurance Trust Fund had roughly half the funds necessary to weather a recession, but the state had never experienced such a massive onslaught of unemployment claims in such a short period of time after Gov. Ned Lamont ordered that many businesses like hotels, entertainment venues and restaurants close to the public.

Gov. Lamont included a $50 million payoff of the debt under his proposal for use of federal ARPA funds. The Appropriations Committee, however, increased that payoff amount to $310 million.

Following the 2008 recession, Connecticut borrowed roughly $1 billion from the federal government to support the unemployment fund as well.

The money was paid back by business owners over a five-year period through higher Federal Unemployment Tax Act costs. The interest on the loan is paid through a special assessment on employers.

Under a bipartisan bill passed in the General Assembly, the legislature gets to vote on how the ARPA money will be spent. A vote on that spending package is expected during the 2022 session.

**Meghan Portfolio and Frank Ricci contributed to this article**