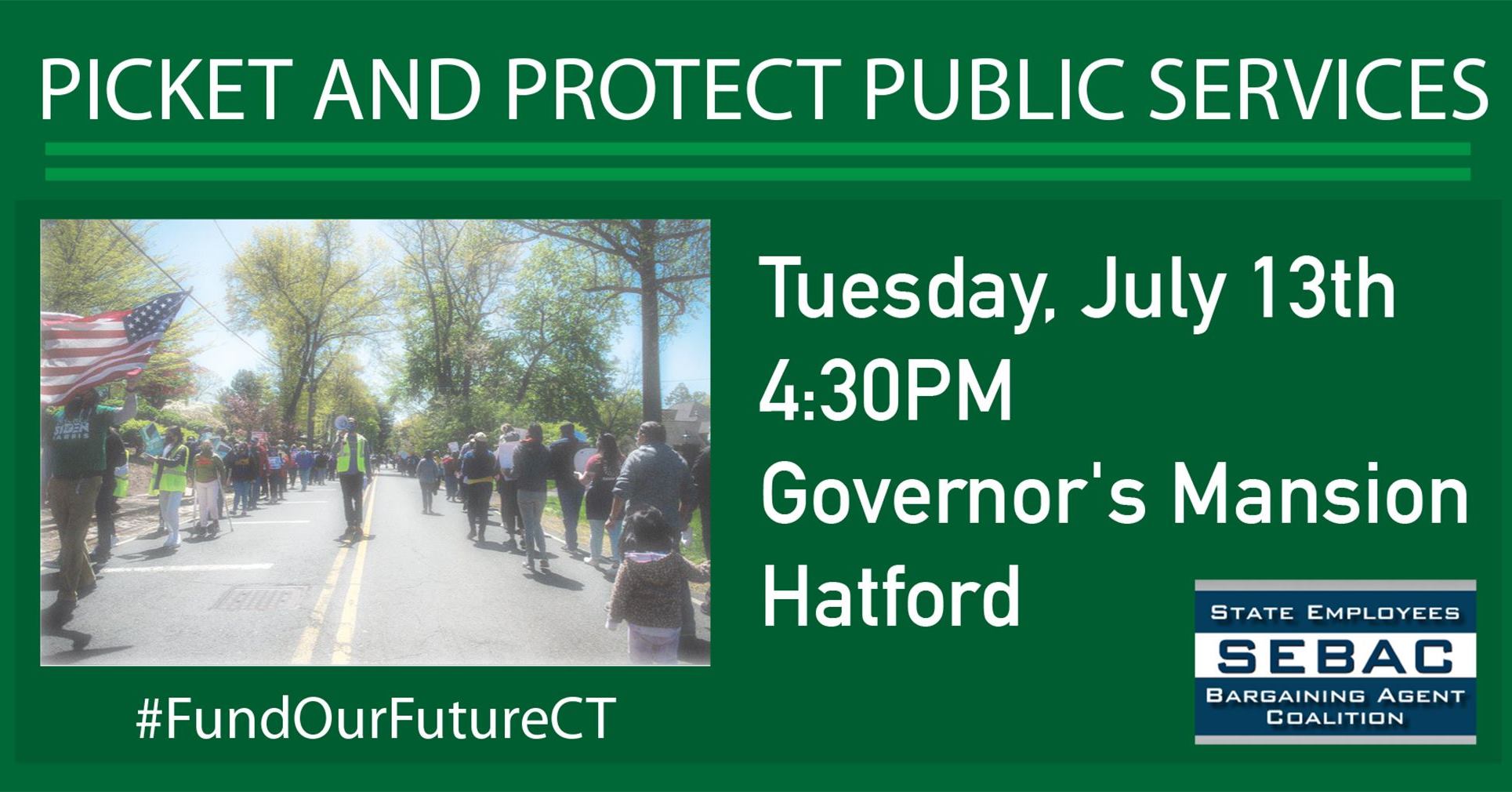 The State Employee Bargaining Agent Coalition announced that it will picket outside Gov. Lamont’s Hartford residence to “Fight for Fair Contracts” with shuttles running state employees from union headquarters to the governor’s mansion.

“Members of all affiliated unions are invited to show solidarity for our members in State Employee Bargaining Agent Coalition (SEBAC) locals seeking fairness, dignity and respect on the job,” the notice from AFSCME Council 4 says. “This action is an important next step in ongoing efforts to secure successor contracts with the administration of Governor Ned Lamont for Connecticut’s public workforce.”

Under the terms of that deal, state employees received two general wage increases of 3.5 percent plus two annual increases valued at roughly 2 percent, as well as layoff protections that expired at the end of June 2021. In exchange, state employees contributed more toward their healthcare costs, new employees were placed in a new retirement tier and the annual cost of living adjustment for those who retire after July of 2022 was adjusted to match inflation.

While the over-arching SEBAC contract that sets retirement and health benefits remains in place until 2027, the individual collective bargaining agreements that determine wages and work conditions for each union ran from 2016 to 2021 and are currently being renegotiated.

A recent protest by unions representing state university and college employees against the Connecticut Board of Regents also indicate that there are some sour sticking points in the process for higher education employees, as well.

A notice from the American Association of University Professors at the University of Connecticut indicates that negotiations over a contract extension are still underway.

Collective bargaining negotiations can be lengthy and are held outside of the public eye. When a contract expires, however, the provisions of the previous contract remain in place until a new agreement can be reached.

Although Connecticut’s government unions supported Gov. Lamont in his 2018 gubernatorial bid, there have been rifts between the governor and Connecticut’s public sector unions over public policy issues related to taxing the wealthy in Connecticut, pandemic pay for front line workers and Lamont’s plan to streamline government services in the face of a potential surge in state employee retirements.

It is also not the first time this year Connecticut’s unions have protested in front of the governor’s mansion.

In February, state employee unions and the Working Families Party staged a car caravan protest at the governor’s mansion in support of “People’s Budget,” part of the “Recovery for All” coalition and movement to impose higher taxes on Connecticut’s high-income residents.

In April, SEIU 1199 held a protest at the governor’s mansion in support of a long-term healthcare workers bill of rights as workers at nursing homes in Connecticut threatened to strike over pay and benefits. The Lamont administration eventually reached a last-minute deal with the nursing home workers and averted the strikes.