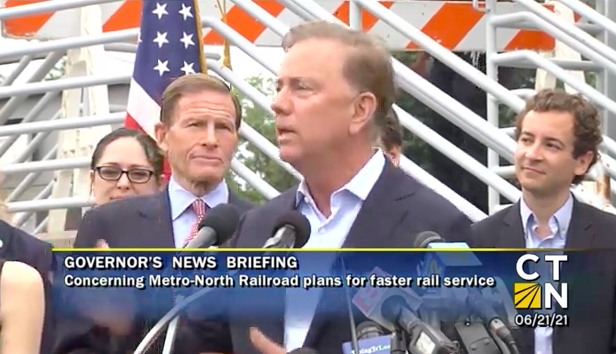 Flanked by Sen. Richard Blumenthal, D-Connecticut, Rep. Rosa DeLauro, D-3rd District, and the President of Metro-North Railroad among others, Gov. Ned Lamont announced that Connecticut will invest up to $10 billion in rail line upgrades to increase speeds and save time on Connecticut’s New Haven Rail Line.

“With so many of our riders returning, we have a unique opportunity to move ahead with Time for CT and deliver real results for commuters around the state by increasing service to New York and by cutting commutes by up to 25 minutes,” said Catherine Rinaldi, president of Metro-North Railroad, calling public transit the “life-blood” of the economy.

The Time for CT plan would reduce rail travel time by 10 minutes by 2022 and by 25 minutes by 2035, while using existing assets and right-of-way, according to the governor’s press release. The plan will also create a purported 45,000 jobs.

According to the Time for CT executive summary, travel times will be reduced through track upgrades, new signal systems that will allow for maximum speeds up to 100 mph and replace and repair bridges. The state would also add new rail cars with more capacity and more amenities.

Of course, the question of who will pay for the upgrades came up, and speakers indicated that they hope much of the funding will come from the federal government under President Joe Biden’s infrastructure plan, which is currently being debated and negotiated in Congress.

“The federal government should pay for rail in the Northeast corridor, more than it has, more than it is planning right now,” Blumenthal said. “We need a massive, bold infrastructure program, bigger and better than what we’re seeing right now emerging as a likely bipartisan plan.”

Department of Transportation Commissioner Joseph Giuletti said the state has already secured funding to decrease commute time by 10 minutes. Moving forward they hope the federal government will be willing to finance 90 percent of the project.

“Washington is an important piece of the funding puzzle, we can’t rebuild Connecticut infrastructure without a federal infrastructure bill,” Guiletti said.

Lamont indicated the state would bond for its share of the improvements, paid for, in part, by the new highway use tax on big trucks passed by the General Assembly this year and estimated to raise $90 million per year.

Noting that the commute time on Metro-North is twenty minutes slower than two decades ago and ridership remains only one-third pre-pandemic levels, Blumenthal said “riders are not coming back unless we make trains faster.”

Prior to the pandemic, the New Haven line carried over 125,000 riders per day and was the least state-subsidized public transit operation on a per rider basis, costing only $3.85 per rider, according to the CREATES Report by the Boston Consulting Group.

The Hartford Line required a state subsidy of $43.30 per rider and Shore Line East received $55.28 per rider.

“Connecticut is home to the most used commuter rail line in the country, and it is a key component of our economic growth, supporting the ability of thousands of people every day to get to their jobs and earn a living,” Lamont said in his press release. “But our aging infrastructure is not only slowing our travels, it’s slowing our economic growth. Nobody wants to live and work in a place where they spend hours stuck in their daily commutes. Faster trains and faster highways mean more jobs.”