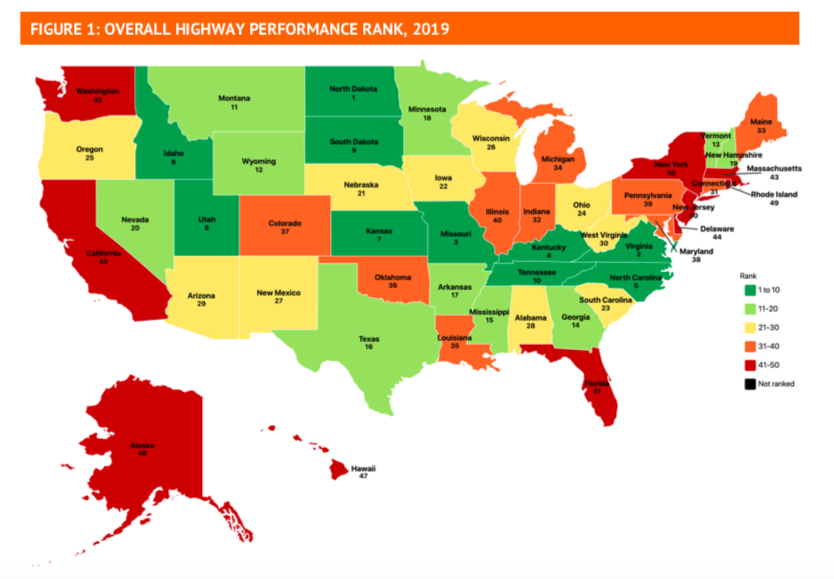 Connecticut neared the middle of the pack in Reason Foundation’s annual ranking of states by highway condition and cost effectiveness, beating out nearby neighbors like Massachusetts, Rhode Island and New York.

Connecticut was ranked 31st in the country, a big jump from Reason’s 2019 study which placed Connecticut at 44th with the highest administrative costs per mile in the nation.

“To continue to improve in the report’s overall rankings, Connecticut needs to have its high spending translate into better overall condition of its arterial system,” said lead author Baruch Feigenbaum. “Connecticut’s costs while high are lower than its peer states.”

“Connecticut’s Interstates have fantastic pavement condition and all three of the state’s fatality ratings are low,” the report says. “Connecticut does spend a lot for its roadway system. But it has a generally high-quality system.”

The change from 2018 and 2019 is stark. At the time, Connecticut was embroiled in the debate over tolling the state’s highways, and the Connecticut Department of Transportation and some lawmakers took issue with Reason’s findings. The DOT eventually removed pension costs from its reported administrative costs, lowering the overall expenditure in that category.

Massachusetts, on the other hand, outspent Connecticut by more than $100,000 per mile of state-controlled road, topping out at $345,947 per mile and fared worse than Connecticut in terms of urban traffic congestion.

“Certain states spend significantly more than the national average,” the report notes. “This spending may be justified if these states perform well in performance categories. Unfortunately, some of the state the spend the most money are some of the worst performers in highway conditions and maintenance.”

Connecticut is slated to receive over $5 billion from the federal government for infrastructure, including $3.5 billion for highways and $561 million for bridge replacement and repairs, part of the infrastructure bill passed by Congress.

The study is conducted using state data reported to the Federal Highway Administration for 2019 and 2020.