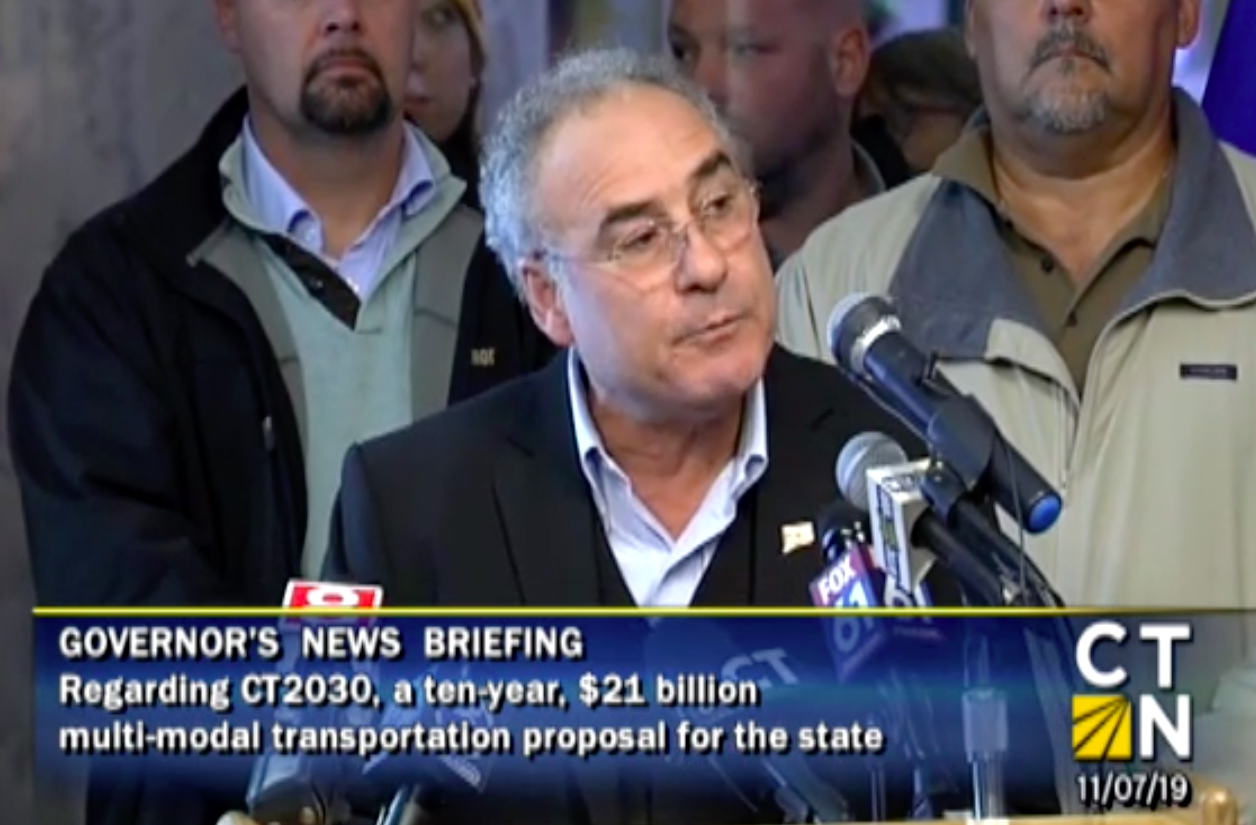 But the plan also essentially guarantees that $21 billion in transportation projects will be awarded to unions who backed Lamont in his 2018 gubernatorial bid and lobbied heavily in 2019 for the governor’s previous tolling plan.

President of the Connecticut AFL-CIO Sal Luciano spoke at the press conference and said CT2030 projects will be completed using project labor agreements.

“We have been assured by the Lamont administration that this work will be built using project labor agreements,” Luciano said. “That’s important because it will protect taxpayers by eliminating costly delays due to labor conflicts or a shortage of skilled workers.”

Project labor agreements are collective bargaining agreements with a contractor that require the contractor to pay union wages and abide by union rules when completing a specific construction project, essentially guaranteeing the contractor will have to use union labor.

And that doesn’t sit well with non-union contractors who make up 85 percent of Connecticut’s construction workforce, according to Chris Fryxell, president of the Connecticut Chapter of the Associated Builders and Contractors.

Quite frankly, I’m disappointed this announcement was made so early in the process. To announce right out of the gate that all this work is going to union contractors is offensive.

Chris Fryxell, President of the Connecticut Chapter of the Associated Builders and Contractors

“Quite frankly, I’m disappointed this announcement was made so early in the process,” Fryxell said in an interview. “To announce right out of the gate that all this work is going to union contractors is offensive.”

Fryxell says he isn’t concerned whether a union or nonunion contractor gets the work but that the process should be subject to a competitive bidding process that awards the lowest responsible bidder.

“We’re talking about a lot of taxpayer money,” Fryxell said. “Everyone should compete on a level playing field. Competition reduces costs for taxpayers.”

The Connecticut Department of Transportation generally puts public projects out to bid, requiring potential contractors to submit estimates and timelines for completion. Those contractors can be a union or non-union business, but state statute requires the DOT to use the “lowest responsible bidder.”

State statute allows project labor agreements if it is determined using a PLA is in the public’s best interest based on cost and efficiency, the availability of skilled workers, the prevention of work delays, ensuring quality of the work, advancement of minority-owned businesses and community employment opportunities.

The requirement of a PLA often limits the number of contractors who are willing to bid for a project by requiring them to hire workers from union halls or pay union benefits in addition to the benefits they already pay their employees.

Regardless of whether the business is a union shop or not, Connecticut’s prevailing wage laws guarantee certain wages and benefits for the workers on any public project over $1 million.

The organization was run by the Connecticut Construction Industries Association, which separately spent another $205,138.47 in lobbying for transportation related issues.

But the spending didn’t pay off in 2019. Lamont’s tolling bill never made its way to the floor of either legislative chamber for a vote despite strong Democratic majorities in the Senate and House of Representatives.

Other organizations like the Motor Transport Association of Connecticut, the Yankee Institute and the grass-roots organization No Tolls CT have already begun to push back against the latest, scaled-down tolling proposal.

In a press release, MTAC President Joseph Sculley said “MTAC remains opposed to tolling existing highway capacity, whether that means current highway lanes, or specific bridges. As the trucking industry already pays the diesel tax, the Petroleum Gross Receipts Tax, and vehicle registration fees, tolls would be a fourth tax for the privilege of using what we have already paid for.”

Hilary Gunn – a toll protestor who sports a recognizable “No Tolls” knitted hat – was visible in the background during Lamont’s press conference, eventually prompting some large men to stand behind the podium and block her out of the visual.

Wrapping up his speech at Lamont’s press conference, Luciano said “CT2030 is comprehensive, it’s smart and it’s achievable. So, let’s get it done.”