The video also featured John Titsworth and Axel Carrion of United Parcel Service in Hartford, which has 5,000 employees throughout the 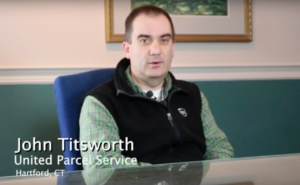 Traffic numbers from the Connecticut Department of Transportation show a steep drop-off in people traveling on Connecticut’s highways in response to the COVID-19 pandemic and the closure of nonessential businesses by the governor. The number of vehicles traveling along I-84, I-91 and I-95 at particular points dropped by as much ...