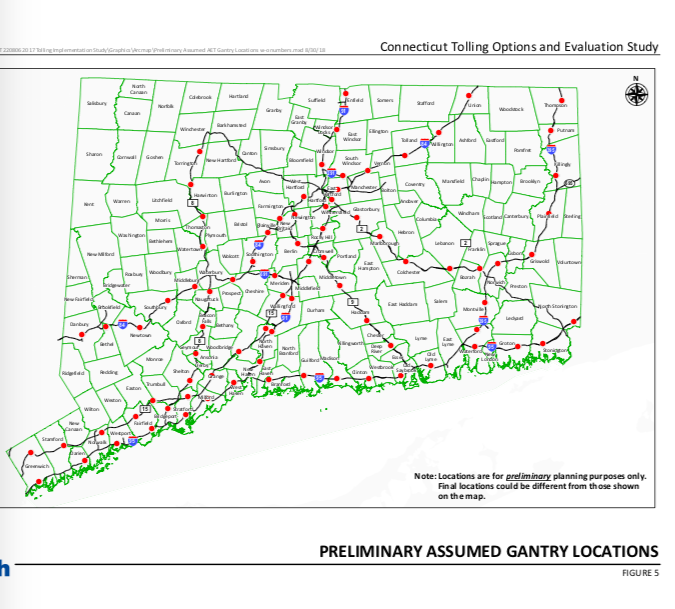 The newest tolling study released by the Connecticut Department of Transportation on November 15 came at a price — and it wasn’t just commuters’ anxiety over paying the state for every highway mile they drive.

According to an email from DOT Principal Attorney Alice Sexton, the tolling report produced by engineering consultant CDM Smith cost taxpayers $2,035,000, roughly equal to $23,391 per page.

That’s approximately half the state’s cost to repair Hartford’s I-84 viaduct located near the Capitol Building, according to the DOT.

Sexton’s email was in response to Sen. Len Suzio, R-Meriden, who had previously filed a Freedom of Information complaint against DOT for refusing to release the study, even after DOT Commissioner James Redeker cited the study’s results before the State Bond Commission in July.

It wasn’t until mid-November on the afternoon of a snowstorm that DOT quietly released the study, which calls for 82 tolling gantries on every Connecticut highway and toll rates ranging from 3.5 to 7.9 cents per mile for passenger cars.

CDM Smith estimates the toll revenue could top $1 billion per year, although construction would cost at least $372 million and the tolls would require $100 million per year in operating costs.

It also proposed tolls on non-interstate highways like Route 8 and Route 15, among others.

This was the second tolling study produced by CDM Smith since 2015. The previous iteration offered a variety of tolling scenarios and pricing, which ranged from 10 to 20 cents per mile with up to 121 tolling gantries.

However, during the 2018 legislative session, pro-toll lawmakers like House Speaker Joe Aresimowicz, D-Berlin, began to walk back those tolling rates, saying they would offer discounts for in-state drivers.

The newest tolling study was “designed to inform a dialogue among our elected leaders and the citizens of Connecticut about the potential for instituting tolls in the state,” Redeker said in a press release.

Gov. Dannel Malloy issued an executive order to borrow $10 million to do an environmental impact study on tolling Connecticut’s highways, which is necessary to obtain federal approval to toll interstates.