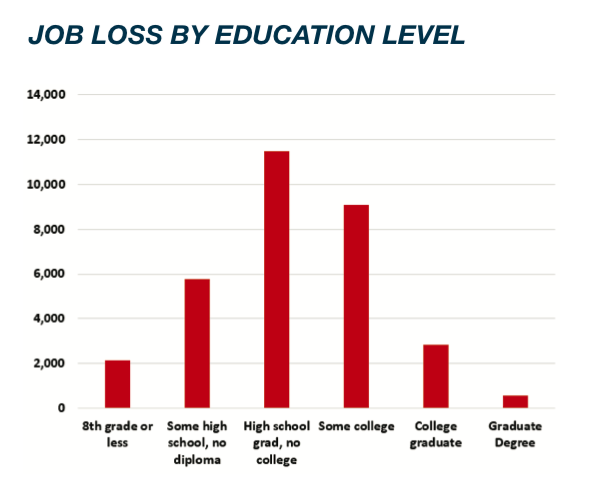 While a bill to raise Connecticut’s minimum wage to $15 an hour died in May, legislators may want to consider a new report before resurrecting the idea during the next session.

The report by a Washington, DC-based think tank concludes that raising the minimum wage to $15 in New Jersey would result in almost 32,000 jobs being lost, many of them affecting younger workers in entry-level positions.

Written by the Employment Policies Institute — a nonprofit group often critical of minimum-wage hikes — the policy report replicated the methodology of a 2014 study done by the Congressional Budget Office, a nonpartisan federal agency that provides data and analysis to members of Congress to assist in legislative decision-making.

The CBO’s 2014 study found that, while a raise in the minimum wage to $10.10 per hour would provide 16.5 million workers with higher earnings, it would also eliminate another half-million jobs.

In other words, the increase would make entry-level jobs for unskilled workers more scarce.

During the legislative session, a proposed bill would have raised Connecticut’s minimum wage to $15 per hour by 2023.

The data suggests that, if transplanted to Connecticut, the job losses incurred by a $15 minimum wage would disproportionally hit low-income urban centers like Hartford and Bridgeport.

About one in eight Hartford residents are ages 16–19, while only 14 percent of the total population holds a college degree. Eighteen percent of Bridgeporters have bachelor’s degrees. Statewide, 38 percent of Connecticut residents hold a bachelor’s or higher.

According to the report, more than half of the jobs would be lost in the retail and hotel and food services industries. Because retail shops and restaurants generally have low margins, business owners are often reluctant to raise prices to cover the cost of higher wages. Instead, they reduce hours or lay off workers, the report states.

The report also notes that 55 percent of those lost jobs would come from women. In Hartford, 53 percent of children under the age of 18 living in poverty are members of female-headed families, suggesting those women are the primary breadwinners for their families. In Bridgeport, 38 percent of families of all income levels are headed by single females.

The report recommends expanding the Earned Income Tax Credit for low-income families as an alternative to raising the minimum wage.

Currently the minimum wage in Connecticut is $10.10 an hour. Neighboring states such as Massachusetts have a minimum wage of $11, while both New York and Rhode Island plan to raise theirs to $11.10 and $10.50, respectively, by the beginning of 2019.

By Marc E. Fitch January 14 , 2021 Labor, Transportation
CTtransit in Hartford, a division of the Connecticut Department of Transportation, has been issued a serious violation notice and a…
Read More