Yankee Institute, EdChoice and the Connecticut Parents Union hosted “Building a Child-Centered Education” at the Mark Twain House in Hartford on Monday, Jan. 23. Speakers made the case that parents should have options about what schools their children attend presented options for reform in Connecticut.

The speakers included former Oklahoma Rep. Jason Nelson who championed the Lindsey Nicole Henry Scholarship Program for Children with Disabilities Act in 2010, which allows special needs children to attend private school if their parents felt their needs were not being met in public schools.

“No institution can be all things to all people,” Nelson said, highlighting that some children may need services that some alternative schools can better provide.

Nelson has been a long-time advocate of school choice and education savings accounts. He pointed out that in nearly every other government provided benefit the consumer is able to choose where and how they use that benefit, therefore school choice is not a “radical idea.” “What’s radical is that we don’t do school choice now, that’s radical.”

Nelson related the story of his daughter being diagnosed with cancer and pointed out that although he and his wife were not doctors they were still able to make decisions on their daughter’s treatment.

Also joining the conference was Robert Enlow, president of EdChoice, a national organization which advocates for school choice.

Enlow made the case that school choice already exists, but it only exists for wealthy families that can afford to send their children to private school or can move to a high-performing school district. But that kind of choice doesn’t exist for low-income families trapped in failing school districts. “This idea that only some people have a choice is wrong,” he told the audience.

Dr. Martin Lueken, also of EdChoice, showed how school choice could work in Connecticut by offering scholarships worth less than the variable cost of educating a child in the Connecticut public school system.

According to Lueken’s analysis, Connecticut spends $19,435 per student. Any scholarship, voucher or tax credit offered for less than the variable cost per student of $13,202 would generate savings for that public school district. 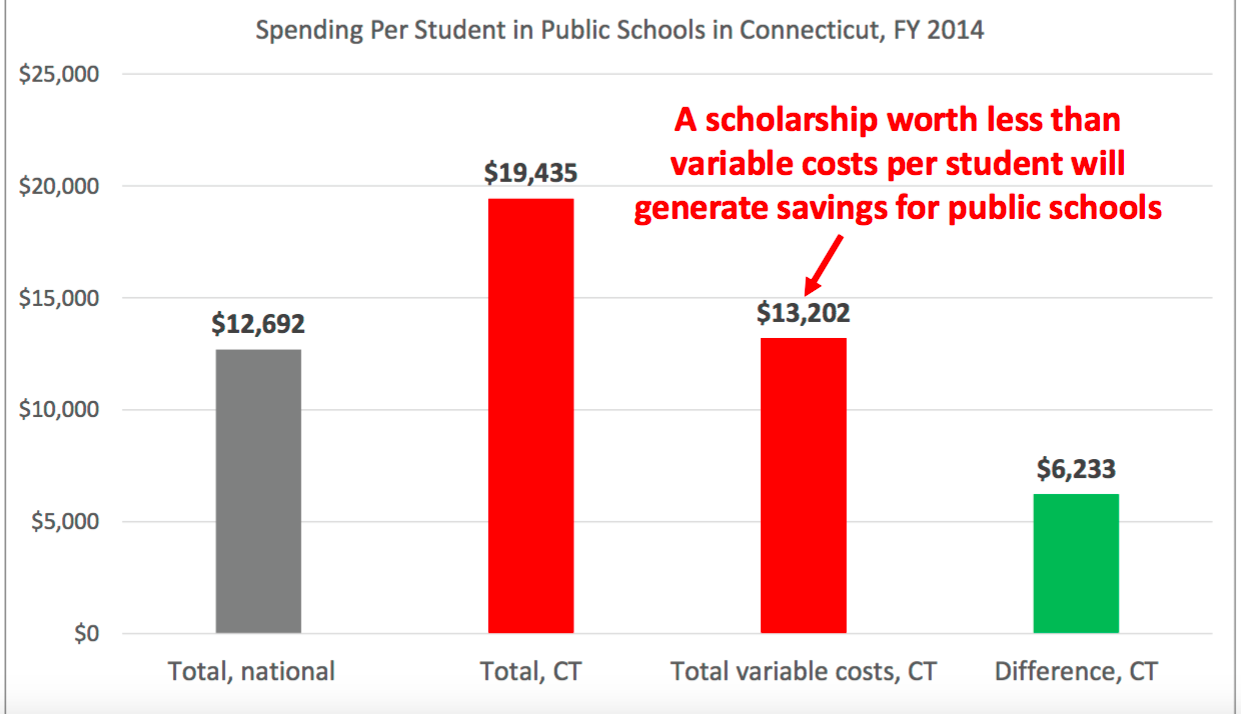 Dr. Ben Scafidi, professor of economics at Kennesaw University, advised against letting courts decide education policy, saying that it is the job of the governor and legislature.

The recent ruling by Superior Court Judge Thomas Moukawsher – who said Connecticut’s school funding system is irrational and gave the state 180 days to fix it – may look good in the short run, Scafidi said. The case will ultimately be decided in the state supreme court which could leave legislators and school districts with damaging court-imposed mandates.

The speakers met with parents organized by groups like Connecticut Parents Union, an education advocacy group. Gwendolyn Samuel, president of CTPU, says parents should have the right to do what is best for their children.

“Compulsory laws force us to put out children in schools that sometimes do not meet our needs. We should not be forced to put our children in harm’s way,” Samuel said.

Samuel says that the choice for parents is not necessarily about public schools versus private, charter or magnet schools, but is about safety as well. “They’re saying they want safe schools, so that their children can get what they didn’t get growing up.”

Bernard Thomas, founder of the Hartford Knights Youth Organization, a community outreach program that works with troubled Hartford youth, says he doesn’t see a choice for students in urban areas with underachieving schools.

“The problem I see is that we still continue to not educate our students at a level where they can be functional citizens and I don’t see the choice,” Thomas said. “We need to start making better choices with our funding and where our money is going.”