Connecticut teachers would be wise to avoid leaving the profession early if they hope to see a return on their pension contributions, according to a new study published by the Thomas B. Fordham Institute, an education policy think-tank.

According to the study, which looked at teacher pension systems in all fifty states, Connecticut public school teachers must work a minimum of 25 years before their pension benefit will equal more than they paid into the system, after adjusting for inflation.

Teachers who leave the profession before reaching the 25 year mark will see their pension contributions benefit other teachers who stay longer.

“It’s not unfair to say that these systems now treat new teachers as sources of revenue for other people’s pensions rather than valued employees in their own right,” the report says. 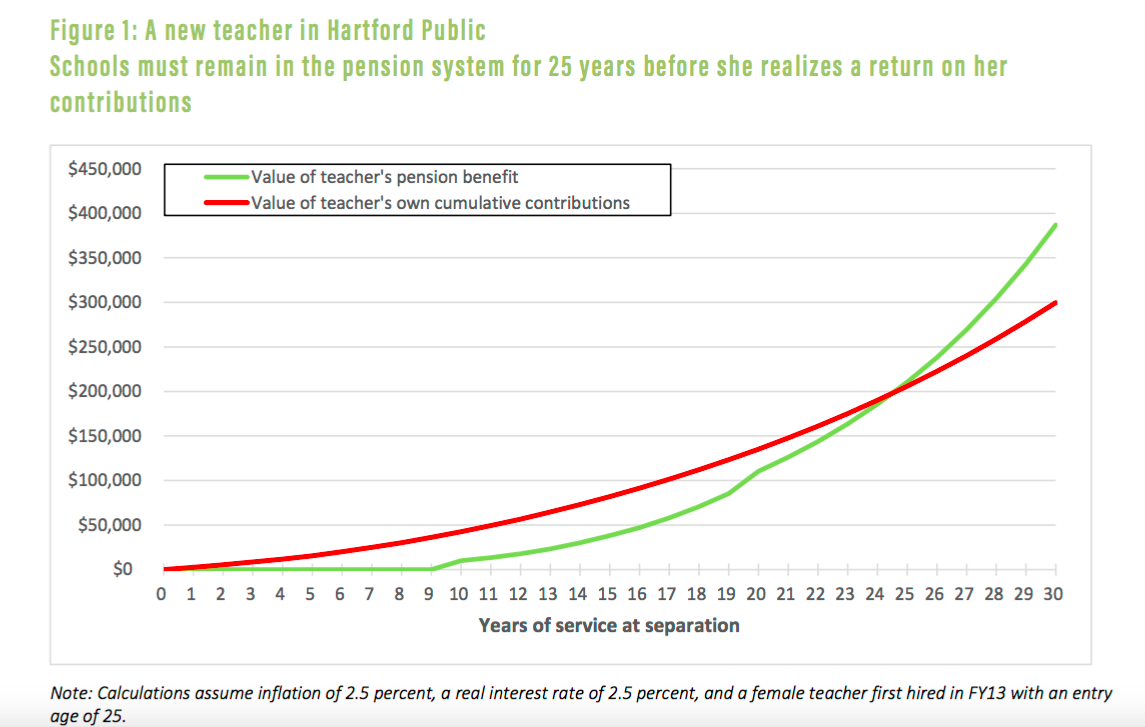 All Connecticut teachers participate in the Teachers Retirement System, which is managed by the state. In order to collect a pension, a teacher must have completed 20 years of service and reached 60 years of age, or they can retire at any age after working 35 years.

Connecticut public school teachers pay 6 percent of their salary toward their pension and are not eligible for Social Security upon retirement.

The problem, according to the author of the study Dr. Martin Lueken, occurs when a teacher retires before the age of sixty. Lueken says that if a teacher begins working at age 25 and retires at 45 years of age, he or she will not see a return on contributions to the pension fund.

In this scenario, the teacher will have paid $135,000 into the pension system but the benefit would only equal $110,000 because the teacher has not reached the “cross-over” point of 25 years when the amount invested by the teacher will equal the total benefit.

“First, her final average salary will be frozen at the point she leaves. Second, the value of her benefit will be eaten up by inflation over the deferment period,” Lueken said. Additionally, a teacher who leaves the profession working less than 20 years will only see a 1 percent multiplier. The multiplier doubles to 2 percent if the teacher continues to work past the 20 year mark.

This means that some teachers will see enormous returns on their pension contribution while others will actually lose part of the money they’ve contributed over the years.

“Teachers who exit the Connecticut retirement system early, or even after a lengthy career, are financially disadvantaged compared to teachers who remain teaching under the same system much longer,” Lueken said.

A study by the U.S. Department of Education’s Center for Educational Statistics found that 17 percent of new teachers leave the profession within five years, particularly among higher poverty schools. At that early stage teachers will have made pension contributions but will not be eligible to receive a pension.

The average career of a teacher nationally is only 15 years. Teachers in Connecticut become eligible for a pension after 10 years of paying into the system but can get a refund on their contribution if they leave work before that time.