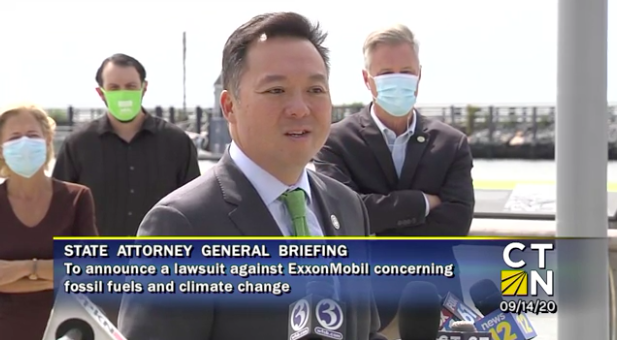 The Connecticut Office of the Attorney General is using special assistant attorneys general funded by billionaire Michael Bloomberg to assist the state in litigation related to the environment and climate change, including Connecticut’s lawsuit against Exxon.

The special assistant attorneys general – identified by the Attorney General’s Office as Benjamin Cheney and Kaelah Smith – were provided through the State and Environmental Impact Center, part of New York University School of Law Fellows Program.

“NYU pays the salaries of the law fellows, but the fellows’ sole duty of loyalty is the attorney general in whose office they serve,” the program says on its website. “All work performed by the fellows is entirely identified and managed by their respective AG’s offices. The law fellows serve as Special Assistant Attorneys General (SAAGs) for a limited term on clean energy, climate and environmental matters with regional or national significance.”

The Connecticut Attorney General’s Office applied for a SAAG in a March 13, 2019 letter sent from Deputy Attorney General Margaret Q. Chapple to David J. Hayes, executive director of the NYU School of Law, at a time when Tong was joining other state attorney generals to fight environmental regulation rollbacks under President Donald Trump’s administration.

“Connecticut continues to act with our partner states, both through litigation and comments on proposed regulatory matters, to ensure that the regulations intended to control greenhouse gas emissions are implemented and that attempts to roll back progress are not successful,” Chapple wrote. “We have only 9 full and 2 part-time attorneys to handle both all our national work and our work on in-state enforcement matters involving all media and all forms of pollution throughout our state. With an additional skilled and experienced staff attorney reporting directly to the head of the Environment Department, we could be involved as leaders in more important issues, and provide more support in progressive multi-state efforts to protect the future of this planet.”

According to emails obtained under a Freedom of Information request and forwarded to Yankee Institute, Attorney General Tong sought out a SAAG following a press conference and release of a special report by the State and Environmental Impact Center indicating state attorney generals were preparing to fight back against the Trump administration’s regulatory rollbacks on March 5, 2019.

Benjamin Cheney, a graduate of the UConn School of Law, was the first SAAG that Connecticut obtained through the State and Environmental Impact Center and he was paid by NYU for his work in Connecticut for two years until the state hired him full-time in 2021 at a salary of $100,585, according to the Connecticut Comptroller’s Open Data website.

During his two years as an SAAG, Cheney worked on Connecticut’s ambitious lawsuit against ExxonMobil, which was filed by Attorney General Tong in September of 2020. Cheney is listed as a special assistant attorney general in the court complaint filed on September 14, 2020. While the lawsuit against Exxon was transferred to federal court, documents indicate that Cheney continues to work on the case but now as an assistant attorney general.

The New York attorney general’s office used an SAAG funded by the State and Environmental Impact Center to pursue its lawsuit against Exxon, leading to criticism that Bloomberg was essentially “buying justice.”

Cheney also represented in the Department of Energy and Environmental Protection in an appeal filed by Nutmeg State Crematorium, LLC after the DEEP reversed their tentative approval to allow a crematorium to be constructed in Rocky Hill over issues related to air pollution. The appeal was dismissed in September of 2020.

Kaelah Smith, a current fellow with the NYU State and Environmental Impact Center who is working for the Connecticut Attorney General’s Office, is listed on the state’s judicial website as representing the DEEP in a lawsuit over DEEP’s approval of a dock at Sunset Beach in Branford.

Connecticut is far from the only state using SAAGs paid for by Bloomberg and the State and Environmental Impact Center. Massachusetts, Rhode Island, New York, Maryland, Delaware and New Mexico, among others, have also retained legal help through the fellows program.

The Connecticut AG’s office writes in their application letter that they have “the authority to hire an NYU fellow as a SAAG, paid entirely by NYU funds,” and that, “We are not aware of any constraints on this authority.”

Although it may appear that taxpayers are getting a good deal with free help for the Attorney General’s Office, Christopher Horner, an attorney who has represented Energy Policy Advocates and the Competitive Enterprise Institute in obtaining records and author of the paper Law Enforcement for Rent: How Special Interests Fund Climate Policy through State Attorneys General, says there would likely be a much different reaction if the SAAGs were funded by other private sources.

“An obvious concern is that these attorneys know where their salary, retention, and even bonuses (despite often being called ‘pro bono counsel’) come from. And it isn’t the OAG,” Horner wrote in an email. “The Bloomberg group and its AG partners insist that, because their contract requires the SAAGs loyalty to be to the OAG, that’s good enough. We know it wouldn’t be if Trump Foundation-hired attorneys were placed in state OAGs to pursue Trump priorities in advance of Trump’s 2016 run (as this program preceded Bloomberg’s), or the National Rifle Association or a pro-life group hired and placed a Special Prosecutor in AG offices to investigate opponents of the 2nd Amendment, or abortion providers.”

Horner says the use of privately funded special assistant attorneys general is part of a growing trend nationwide, along with copycat organizations such as the Public Rights Project, an organization with a focus on economic and environmental justice.

The Public Rights Project uses a similar fellowship program to “recruit and embed public interest-minded attorneys for two years in state and local public law offices where they act as force multipliers to enhance government’s capacity to enforce residents’ rights.”

The Office of the Attorney General, however, says that the State and Environmental Impact Center “has no role whatsoever in the policy or legal decisions of the office.”

“The fellowship program provides funding for one special assistant attorneys general assigned to our existing environment division,” Elizabeth Benton, communications director for the Attorney General’s Office, wrote in an email. “The Attorney General in consultation with the senior leadership of the office sets policy and makes the legal decisions for the office according to his constitutional and statutory authority.”

Yankee Institute has filed a Freedom of Information request with Attorney General’s Office seeking further documents related to this matter.