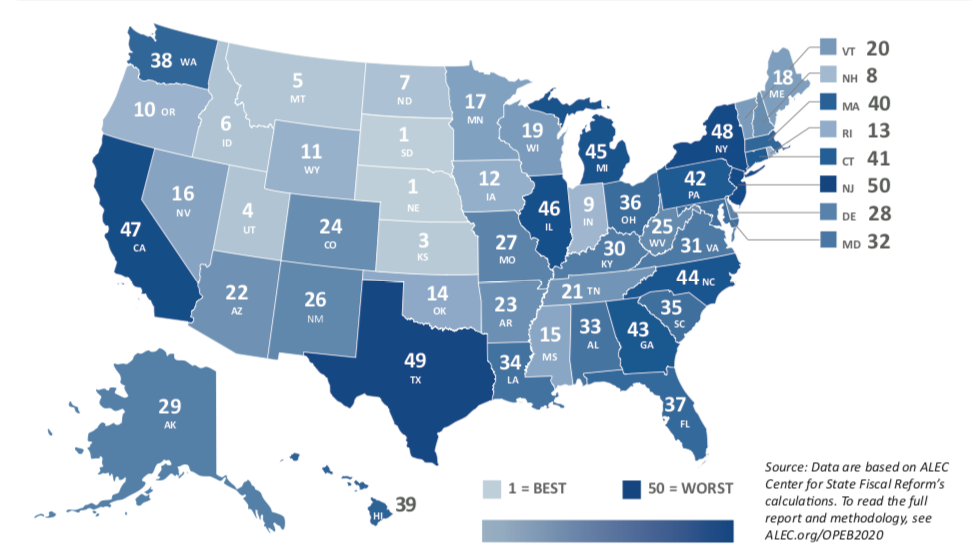 Connecticut’s total unfunded liabilities for other post-employment benefits like retiree healthcare totals $23.3 billion placing Connecticut 41st in the nation based on the size of its liability, according to a new report from the American Legislative Exchange Council

On a per capita basis, however, Connecticut’s ranking drops to 45th with unfunded OPEB liabilities totaling $6,524.59 per person in the state. Looked at another way, Connecticut’s OPEB debt is equal to 8.78 percent of the state’s gross domestic product in 2018.

Other post-employment benefits are any state employee benefits received in retirement other than a pension and includes things like retiree healthcare, Medicare supplemental payments, or life insurance.

Although the ALEC report is based on 2018 figures and uses a reduced “risk free” discount rate, their figure of $23 billion in unfunded OPEB debt matches Connecticut’s official figure listed in its 2020 Comprehensive Annual Financial Report.

State OPEB systems, however, have been notoriously unfunded over the course of decades with many states saving nothing to pay for future benefits and instead using a pay-as-you-go system.

According to ALEC, across all fifty states, the total unfunded OPEB liability is $968 billion.

Those debts are in addition to states’ unfunded pension liabilities, which in Connecticut totals roughly $40 billion by the state’s own accounting.

“State OPEB plans face many of the same problems as public sector pension plans,” the report says. “Without real reforms, defined-benefit OPEB plans will place a severe burden on taxpayers and other state spending priorities. If taxpayers bail out OPEB plans, revenue will be taken away from essential public services, opportunities for tax cuts will be lost and state workers will experience benefit cuts.”

Some of that has already happened in Connecticut as attempts to shore up Connecticut’s massive retirement debts, including its unfunded pension liabilities, have resulted in tax increases, labor concessions and a crowding out of the state’s ability to pay for other services.

OPEB costs — like the state’s pension plans, debt service and Medicaid — are part of Connecticut’s fixed costs, which now consume at least 50 percent of the budget, putting a squeeze on other programs and spending priorities.

Connecticut is currently contributing $788 million toward OPEB costs per year, plus $2.8 billion per year toward its pension systems, with the majority of those funds going to make up for the unfunded debt, according to the state CAFR.

Shockingly, though, Connecticut is doing better than a number of other states in terms of its OPEB funding ratio.

According to the report, Connecticut’s OPEB system is 2.8 percent funded, the 28th highest funding ratio in the country. Thirteen states, including Florida, New York and New Jersey have no funding for their OPEB systems whatsoever.

Starting in 2011 under a negotiated agreement between Gov. Dannel Malloy and the State Employee Bargaining Agent Coalition, state employees contribute 3 percent of their pay toward retirement healthcare for the first 10 years of employment. The state began to match that three percent contribution in 2017.

Although still woefully underfunded, Connecticut’s position in ALEC’s state rankings based on funding ratios illustrates how little states have saved to fund future retirement benefits for their employees.

New Jersey ranked dead-last in nearly every measurement category and, although Connecticut did slightly better than New York, it was still ranked below all other New England states.