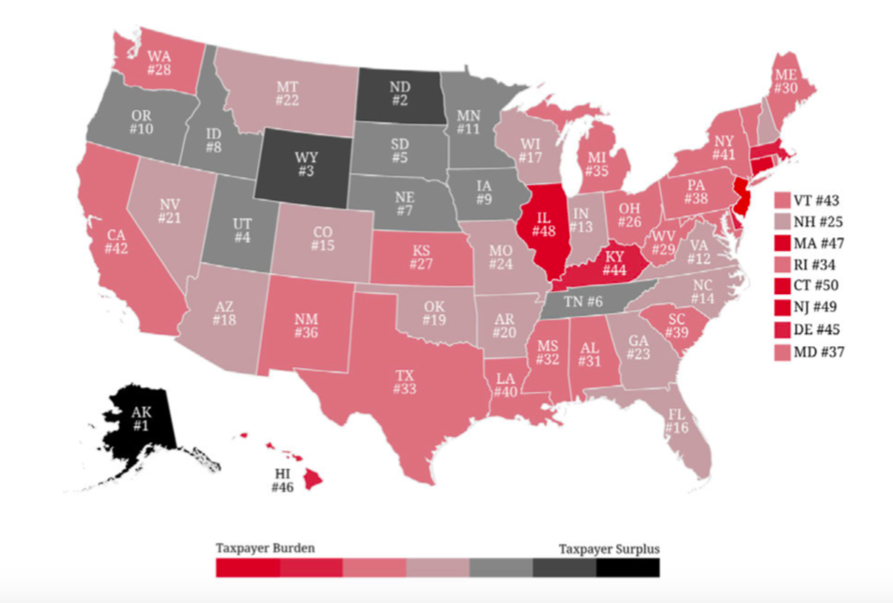 As Connecticut prepares to make a historic $1.6 billion payment toward its unfunded pensions, a new report shows Connecticut has the highest taxpayer debt of any state in the nation.

According to Truth in Accounting’s annual Financial State of the States 2021 report, Connecticut’s overall debt increased in 2020, leaving each taxpayer with an overall state debt burden of $62,500 per taxpayer.

The average debt burden across the country was $9,300 which, as the report notes, is $2000 worse than last year.

“Connecticut’s overall financial condition worsened by 18 percent during the pandemic mostly because pension plan liabilities increased faster than investment income, which catapulted the state to last place,” the report says.

The increase in pension and retiree healthcare debt is tied largely to changes in how that debt is calculated, including mortality rates, discount rates and the increasing cost of healthcare services. According to the state’s 2020 CAFR, Connecticut’s retirement liabilities increased by $8.4 billion between 2019 and 2020.

Federal support to Connecticut during the pandemic coupled with higher-than-expected income tax revenue related to investment earnings allowed Connecticut to bridge a $3.5 billion biannual deficit. It also allowed Connecticut to keep its rainy day fund intact and thereby transfer $1.6 billion to pay down pension debt through the state’s volatility cap.

But Connecticut’s current rosy budget picture doesn’t mean that taxpayers aren’t looking at some big debt numbers, part of Connecticut’s fixed costs that will continue to haunt the state budget when the federal funds dry up.

According to the Office of Fiscal Analysis, retired employee benefits take up 9.7 percent of Connecticut’s appropriations budget while payments for Connecticut’s bonded debt eat up 14 percent of the budget.

The annual cost of Connecticut’s fixed costs – which include fringe benefits and debt service – are projected to increase $1.4 billion by 2023, according to the Office of Fiscal Analysis. However, the state’s pension payoff will save more than $71 million in the General Fund and Special Transportation Fund.

Naturally, Connecticut was not alone among states for having significant debt, but Connecticut’s taxpayer far outpaced nearby debt-ridden neighbors. Massachusetts ranked 47th in the report with $38,100 in debt and 49th ranked New Jersey had $58,300 in debt per taxpayer.

Overall, debt across all 50 states amounted to $1.5 trillion, with pension debt and retiree healthcare debt comprising the vast majority of that debt burden.

The onset of the COVID-19 pandemic sent state finances into a tailspin with some unexpected results. The quick recovery and surge in the stock market increased tax returns for Connecticut and resulted in higher investment returns for its pension plans.

Truth in Accounting is a Chicago-based organization that analyzes government accounting data to “educate and empower citizens with understandable, reliable, and transparent government financial information,” according to their website.