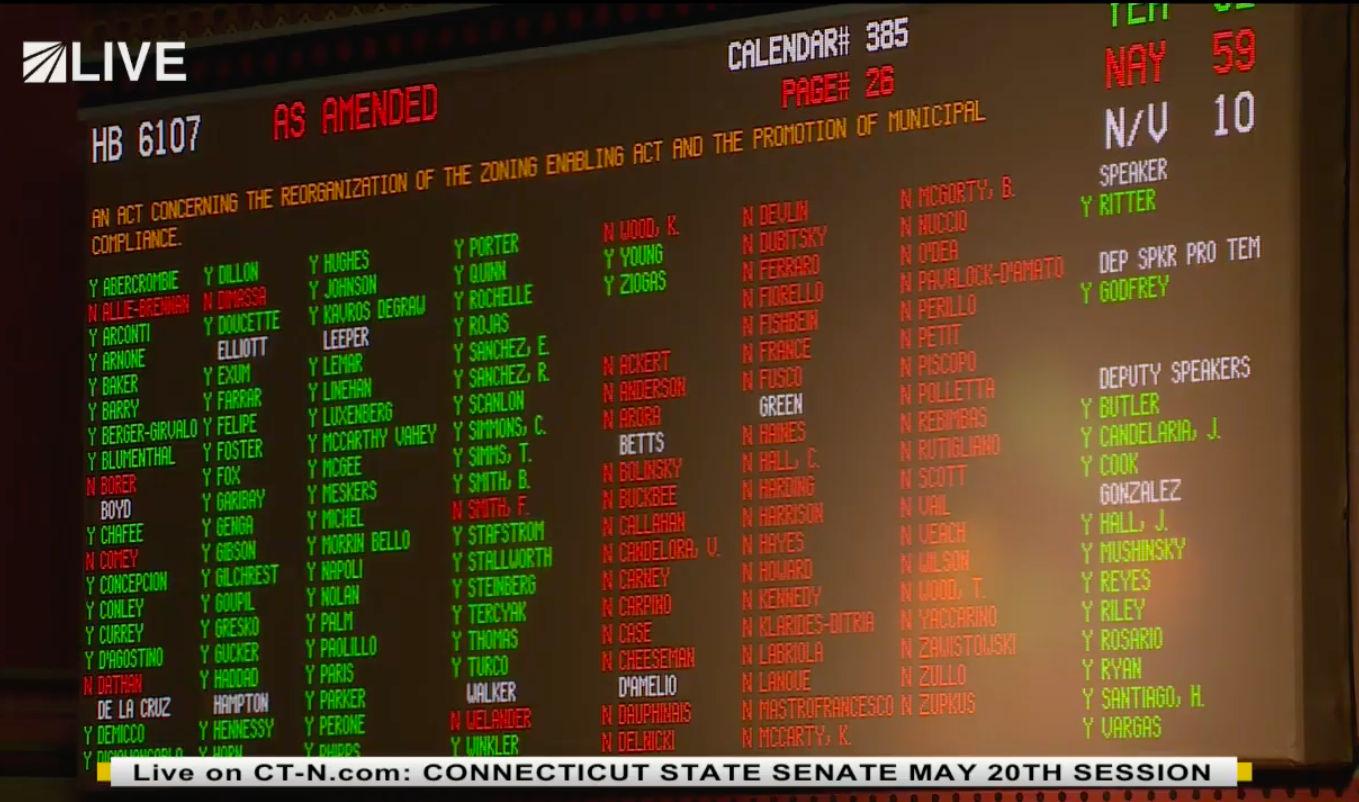 The House of Representatives passed a watered-down zoning bill that maintains much of local zoning commissions’ authority over development in municipalities, while also allowing as-of-right building of accessory dwelling units.

Zoning legislation has been a controversial and hot-button topic in the legislature and throughout the state, as groups like Desegregate CT seek to ensure more housing and multi-family units are built, while their counterpart – the group CT 169 Strong – sought to maintain local government control.

Both groups have been holding rallies around the state over the past few weeks and months in attempts to drum up support at the local level.

“We need to ask ourselves are we opening the door to a state-mandated, top-down, one-size-fits-all approach to zoning by taking the steps we’re taking here, and, if we are, do we want to do that?” asked Rep. Joseph Zullo, R-East Haven, after noting that the bill has been through many iterations.

“What we’re establishing is certain uses as of right, which means less public hearings, less public input and it begs the question, is that good for democracy?” Zullo said, adding that the bill lacks an enforcement mechanism.

Rep. Kim Fiorello, R-Greenwich, a vocal opponent of the legislature’s push for changing local zoning laws, said that affordability issues in Connecticut are not just limited to housing, but extend to nearly every facet of life.

Zoning commissions would not be able to consider a town’s “character” when deciding on a development but could rather consider “physical site characteristics.”

However, the commissions would also have to “expressly allow development of housing which will meet the housing needs identified in the state’s consolidated plan for housing and community development,” according to the bill.

The bill places limitations on parking requirements, minimum floor area, caps on multi-family dwellings or denial of building permits based on “character” of the town or income levels of applicants. It also limits fees that towns can assess on developers of affordable housing.

Absent from the bill is any requirement for transit-oriented development, a lynchpin issue for Desegregate CT. Several zoning bills that were put forward during the legislative session required as-of-right multi-family and multi-use developments within a certain distance of transit stations and main streets.

The legislation would also create a Commission of Connecticut’s Development and Future, made up of a number of legislative leaders, appointees, state agency commissioners and the chairs and ranking members of legislative committees related to transportation, housing, planning and development and environment.

Alexis Harrison of CT 169 Strong, however, says that Connecticut residents should “remain vigilant” and continue contacting their senators.

“We, the people, are the most important piece of checks and balances, and legislators hold their offices because of us,” Harrison said. “CT 169 Strong will keep advocating for nuanced policies that help and empower our self-governing, independent 169 cities and towns, not take it away.”

Desegregate CT praised passage of the legislation. “While not encompassing all of the DesegregateCT proposals, HB 6107 is a step forward and contains a package of zoning reforms crucial to boosting out economy, protecting our environment, and making Connecticut more equitable,” the group said in an email.

The Open Communities Alliance, however, called passage of the bill “troubling” and a “shockingly bad outcome.”

“Despite the exceptionally hard work of advocates and legislators alike, this is a shockingly bad outcome in a state which over the last year has felt increased scrutiny of how its exclusionary zoning practices contribute to racial disparities in health, education, policing and public safety, employment, and access to a range of resources,” the group wrote in an email. “Worse, this bill actually may set us back because there is a good chance it will be taken as the legislature’s answer to exclusionary zoning for years to come.  It’s not an answer; it’s an abdication.”

The legislation and very public push toward creating more state restrictions on local zoning commissions became a contentious and, at times, bitter fight over 2021 with public officials and activists claiming that suburban and often wealthy municipalities were actively trying to keep minorities and low-income individuals out of their towns.

The public hearing on zoning bills before the normally-quiet state Planning and Development Committee ran through the night with hundreds testifying and submitting testimony.

A lawsuit brought by attorneys with the Open Communities Alliance and law students at Yale University against the town of Woodbridge to require the town to allow more multi-family housing is ongoing.

Similarly, Rep. Cristin McCarthy Vahey, D-Fairfield, the lead proponent of the bill, says this is just one step in the process toward creating a more inclusive state.

“Now is the time for us to empower the communities of Connecticut for us to plan for our future, to expand economic development opportunities, to diversify the housing stock of our state,” said Rep. Cristin McCarthy Vahey, D-Fairfield, the lead proponent of the bill.

“Subsidies and tax credits will not be enough. Nor will zoning,” McCarthy Vahey said. “We will have to use all the tools we can to help create a more economically vibrant and diverse Connecticut.”