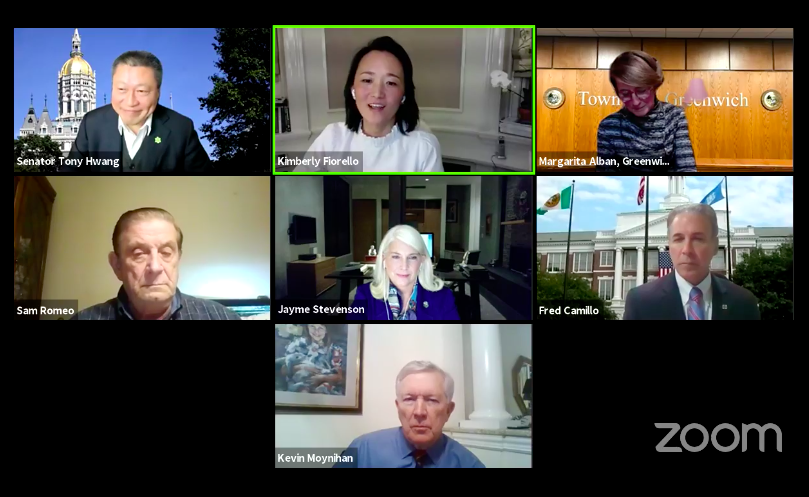 An online town hall meeting hosted by Sen. Tony Hwang, R-Fairfield, and Rep. Kimberly Fiorello, R-Greenwich, on Tuesday discussed a draft bill that would reshape what local planning and zoning commissions can and can’t do in regard to housing developments, land usage and affordable housing projects.

The meeting was held in response to a push throughout summer by Desegregate Connecticut, an advocacy group seeking to expand housing diversity and supply to decrease racial and economic segregation. Desegregate CT’s efforts led to a zoning and affordable housing bill being drafted by Sen. Saud Anwar, D-South Windsor.

The lengthy and complex legislation — which has not yet been proposed this year — was drafted by Sen. Anwar who is vice-chair of the state Housing Committee. After the legislature shut down in March due to the pandemic advocates pushed for a Special Session vote in July, but legislative leaders declined, focusing instead on the police reform bill.

The zoning and affordable housing bill is expected to return this year, prompting the town hall discussions.

“I do believe we need sustainable solutions to address critical housing needs in our state,” said Hwang, ranking member on the state Planning and Development Committee. “These challenges are faced not just by suburban communities, but cities and rural areas as well.”

But the idea of the state government placing restrictions on local governments’ ability to regulate land usage in their towns and cities led several participants to say that a top-down push by state lawmakers is contrary to calls for more democracy as it would limit town residents’ say in what gets built in their town and how.

“The proponents of some of these new ideas are saying that our local zoning boards are not getting it right, they say that we need statewide uniform zoning standards and more as-of-right privileges for builders,” Fiorello said.

“Who do you trust to make local zoning guidelines and standards in your town? Your town or a central office in Hartford?” Fiorello asked.

State statute says that towns and cities can create their charter and government structure under the “home rule law,” which allows the state to avoid dealing with the minutiae of local issues.

The draft bill would, among other things, prohibit local zoning officials from considering things such as traffic impacts; fire safety for affordable housing applications beyond attesting that the development meets the requirement of the Fire Safety Code; require zoning regulations to combat discrimination and segregation; expands the reach of public housing authorities and overrides certain restrictions on multifamily housing.

The town hall meeting and the draft legislation also bumped up against Connecticut’s affordable housing statute.

The statute — 8-30g — gives developers of affordable housing the ability to challenge local zoning decisions in court if a municipality has less than 10 percent of their housing deemed affordable based on the lesser of state or local median family income.

To date, only 30 towns have met that 10 percent threshold, although First Selectman Camillo said that many of the existent units in Greenwich are not counted as affordable housing even though they meet the requirements.

“Greenwich is committed to doing the right thing, but we also believe strongly in local control,” Camillo said. “We pretty strongly believe that we actually have that number already but are just not counted.”

“A lot of this is coming from the feeling that 8-30g has failed to deliver on its promise,” Pickering said. “I’m not aware of any studies that have demonstrated that, that have empirically looked at 8-30g and asked why hasn’t it worked, and how can we fix it? Instead, this creates a parallel frame-work and leaves 8-30g in place.”

Desegregate Connecticut says they believe their proposals are deregulatory in nature, loosening local zoning restrictions so housing can be built to meet market demand, such as enabling development within a half mile of transit stations and main streets and allowing property owners to build accessory dwelling units.

Reached for comment, Sara Bronin, head of Desegregate Connecticut, says she thinks residents and some lawmakers are misinterpreting their policy proposals.

“I think it’s important when we have public conversations that we base those conversation in data, research and facts,” Bronin said. “It seemed like several of the presenters were not familiar with our proposals.”

Bronin says Desegregate Connecticut has been meeting with residents across the state over the last six months to refine their proposals for the legislature and that concerns that massive apartment buildings would suddenly be placed near single-family residential homes are unwarranted.

“We’ve never said, and we’ve never lobbied for, 80 to 100-unit apartment buildings, but that might have been the impression you’d get listening to the speakers,” Bronin said, noting that they are advocating for a minimum of four-family units within a half mile radius around transit stations and 2-family units within a quarter mile of main streets. In both cases, 10 percent of the units would be reserved for affordable housing.

“Four family units is not a big lift for most towns,” she said. “The town would choose how to rezone that half-mile radius.”

But the push to alter the “home rule” status of Connecticut planning and zoning commissions during the 2021 session could prove complex and divisive, and speakers on the town hall forum believed there are other ways to address the issues without resorting to state-wide legislation.

Nevertheless, the nuances surrounding the issue related to democracy, local control vs. state control and who should be allowed to regulate property usage that affects home values are bound to create a policy quandry in the Land of Steady Habits.

“I propose that these folks are looking for bigger picture prosperity in Connecticut; more jobs, more homes that grow in value, more good schools, more safe neighborhoods and more beautiful nature,” Fiorello said. “Zoning can cut both ways for private property rights. It can infringe, and it can protect.”