After securing raises for state employees, unions run ads to tax the rich 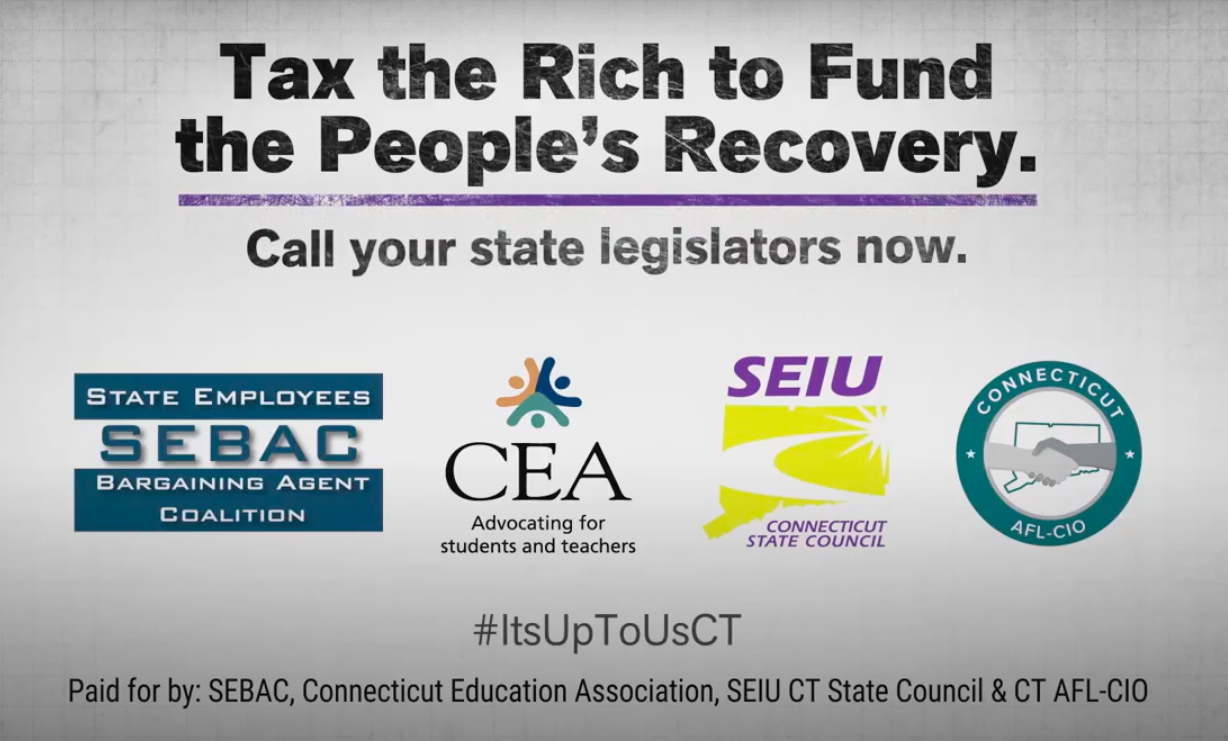 A coalition of public sector unions in Connecticut are running advertisements on television and social media calling for increasing taxes on the wealthy and list off the names of Connecticut’s billionaires they feel should be targeted.

The ads come just two months after state employees received a second 3.5 percent wage increase under the terms of the 2017 SEBAC agreement, at time when hundreds of thousands of Connecticut residents were out of work due to the pandemic. A second salary step increase for state employees is set to occur in January.

The ads are endorsed by the State Employee Bargaining Agent Coalition, the CT AFL-CIO, SEIU and the Connecticut Education Association.

The ad claims Connecticut billionaires are profiting from the COVID-19 pandemic and gives a list of names including Steve Cohen of Point 72 Asset Management, investor and philanthropist Karen Pritzker and CEO of AQR Capital Clifford Asness.

Notably absent from the list of billionaires featured on the ad is hedge fund billionaire Ray Dalio.

The Dalio Foundation has worked with the American Federation of Teachers, an affiliate of the AFL-CIO, on education issues and helped provide lap tops for children when schools were closed down.

“Workers have been at the forefront of innovative solutions to the unprecedented challenges that COVID has presented to us over the past several months,” Connecticut AFL-CIO President, Sal Luciano said in a press release, “They continue to sacrifice their health and safety while billionaires throughout our State have sat back and reap the rewards.”

In May, the SEIU and other union organizations led a caravan of cars through the streets of Greenwich depositing fake body bags in front of houses and honking their horns, a protest they dubbed “Money Bags and Body Bags.”

“Billions of dollars that instead of being in the hands of the most vulnerable in the form of critical public services, is sitting in the bank accounts of the richest residents in our state,” said Carl Chisem, President of the Connecticut Employee Union Independent, Local 511. “Connecticut doesn’t need more billionaire bailout, we need a people’s recovery.”

The advertisement cites a 2020 study by Connecticut Voices for Children which calls for adding two new tax brackets for individual making $1 million or more and those making $5 million or more, taxed at 7.99 percent and 8.49 percent respectively.

It also calls for adding 2 percentage points to those rates for earnings from capital gains, dividends and interest.

The study cites Connecticut’s 2014 Tax Incidence Study to show the top earners in the state pay a lower effective tax rate based on their income. However, the study also shows that roughly 4,000 high income earners at the time accounted for 22 percent of the state’s income tax revenues.

But a people’s recovery may be slow-coming, even with a tax increase on the wealthy.

Since the 2008 recession, the income tax rate on Connecticut’s top bracket has been increased three times, but the state has seen anemic job growth, even during one of the most prolonged periods of economic growth in the nation since World War II. Connecticut never fully recovered the jobs lost during the recession.

Meanwhile, Massachusetts regained nearly 370 percent of the jobs lost during the 2008 recession.

With the onset of the COVID-19 pandemic and economic recession, the state may also see a slower recovery, based on job recovery trends going back to 1980.

The state’s labor unions have been pushing for increasing taxes on Connecticut’s top payers for several years, whether through an increased income tax rate or a fee on financial services.

Malloy and his Secretary of the Office of Policy and Management Benjamin Barnes said that both tax increases in 2011 and 2015 went to pay for state employee and teacher pension costs.

Despite the tax increases in 2009, 2011 and 2015, Connecticut continued to face multi-billion dollar deficits due to Connecticut’s rising fixed costs related to debt service payments and retirement obligations.

Gov. Ned Lamont has also shied away from raising tax rates on the wealthy, but the state will be facing deficits upwards of $2 billion in the coming years, part of the fallout from the COVID-19 pandemic.

Connecticut has seen its share of wealthy investors move to Florida in the last decade, part of a nationwide trend of people migrating to lower tax states.

Barry Sternlicht, Paul Tudor Jones and Edward Lampert, among others, have all departed for Florida and taken with them sizable incomes that contributed to Connecticut’s tax revenues.

Lamont said he attempted to temporarily suspend the wage increases for state employees who were not on the front lines during the pandemic, but the unions refused, claiming they had already sacrificed enough through previous contract negotiations that raised healthcare costs and pension contributions.

The total cost of the two consecutive wage increases for state employees is pegged at roughly $350 million on an annualized basis.

It was the fifth wage increase state employees have received in 11 years.