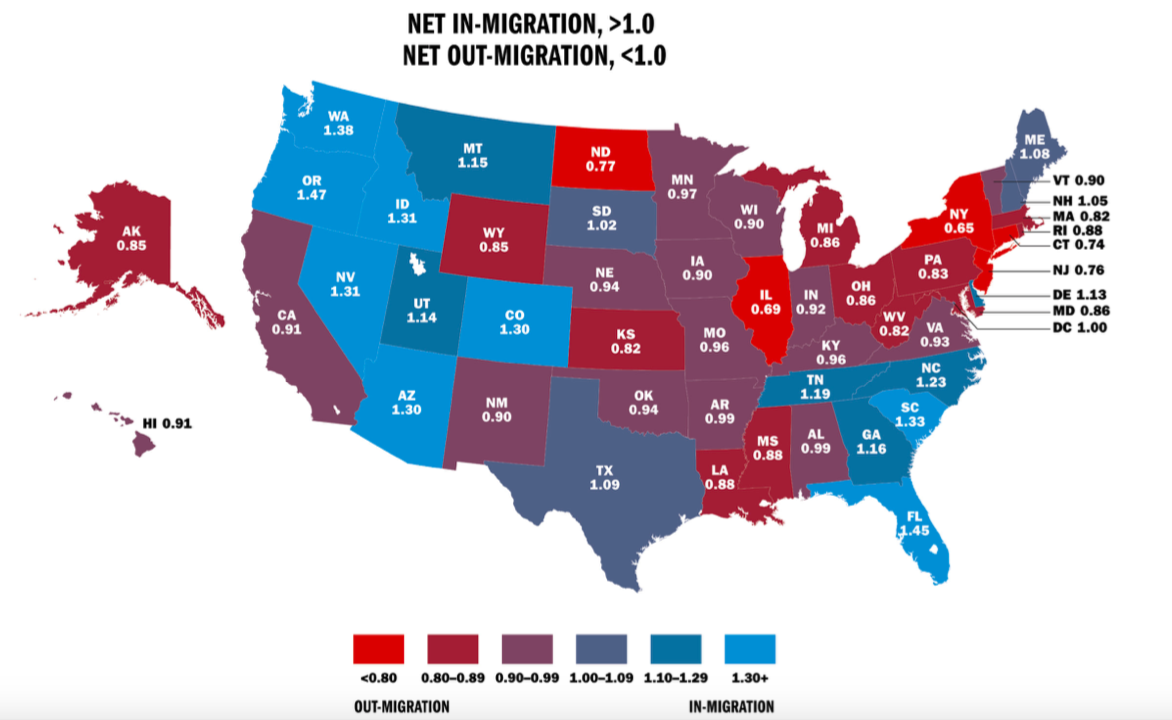 Connecticut saw a net loss of loss of $2.6 billion to other states in 2016, and those migrating into the state earned only 55 percent of those who left, according to a study from the Cato Institute.

The study comes as Connecticut nears an election which is focused heavily on the state’s hefty tax burden.

Connecticut saw a net loss of 12,254 tax filers – the sixth highest loss in the country.

The study was based on Internal Revenue Service data and showed Connecticut had the largest earnings divide in the country between those moving out and those moving into Connecticut.

“Strictly speaking, AGI (adjusted gross income) does not migrate; people do,” wrote study author and Director of Tax Policies Studies for Cato Chris Edwards. “Nonetheless, saying income is ‘migrating’ is rough shorthand for saying that the earning power of households is moving between states.”

The study found that high tax states across the country saw a net out-migration of people, while lower tax states had net in-migration. In all, 24 out of 25 states with a tax burden of 8.5 percent or higher lost families – and earnings – to other states.

The study also showed that high income earners tend to be more mobile. While IRS data shows migration rates are highest for low income earners, Edwards writes that most of those households are often young, single people.

“When you look within each particular age category, the migration rate is much greater for high earners than it is for middle-income earners,” Edwards wrote.

The Cato study goes on to list some of Connecticut’s major investors who have left the state in the past, which have been well documented. Thomas Peterffy, C. Dean Metropoulos, Paul Tudor Jones, Barry Sternlicht and Edward Lampert all moved to Florida between 2012 and 2016.

Combined, the net worth of those five individuals tops $68 billion.

Critics have said that taxes rarely cause wealthy individuals to move and claim the climate in southern states is the primary reason top income-earners move out of state.

While the U.S. Census Bureau does not ask movers about taxes, it did find that only 2.2 percent cited the “a change of climate” as their reason for moving, according to the study. The most common answer was individuals wanted a new or better home.

However, a survey by Bankrate found cost of living and taxes ranked higher in people’s decision to move, particularly in retirement. Retirees tend to have higher incomes and are one one of the largest age groups moving out of Connecticut, according to the Commission on Economic Competitiveness.

Connecticut is considered a high cost of living state and has seen three major tax increases in 2009, 2011 and 2015.

The state population was growing until 2014 and since then has seen a net loss of population almost every year, according to the Office of Policy and Management, although the state gained a couple hundred residents in 2017.

Several studies conducted by state commissions have confirmed the loss of higher-earning Connecticut residents to other states, including the Commission on Economic Competitiveness and the more recent Commission on Fiscal Stability and Economic Growth.

According to the Commission on Fiscal Stability and Economic Growth’s final report, “Those migrating to Connecticut are earning less than those who are departing by $30k per household.”

The change has lawmakers and governors scrambling for solutions and mounting a court case against the Trump Administration for what they say is unfair targeting of wealthy, Democrat majority states.

Cato says the federal tax changes should be a “wake up call” for high tax states. “The new federal tax law should be a wake-up call for such laggard states to improve their tax codes, slim down their governments, and allow residents more economic and personal freedom.”