Showers “Off Limits” for prisoners housed in COVID quarantine units 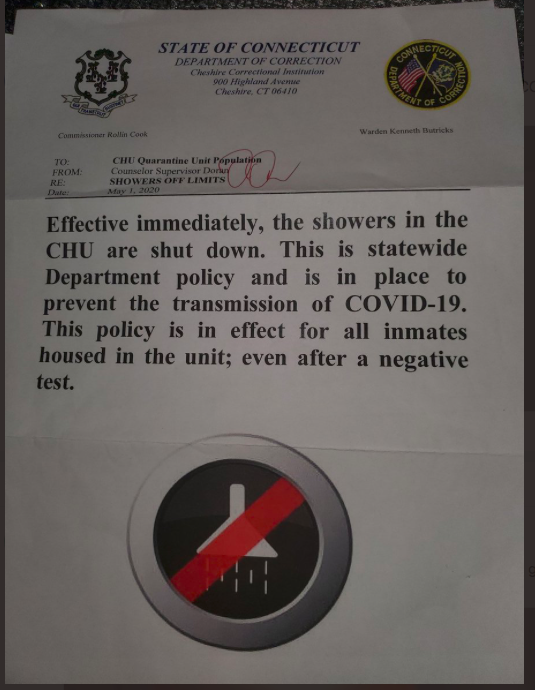 Prisoners housed in the Cheshire Correctional Institution’s COVID quarantine unit received word they are no longer allowed to shower, according to a May 1 notice sent from Counselor Supervisor Damian M. Doran to the unit’s quarantined population.

According to the notice, the shower shutdown is a Department of Correction statewide policy.

The letter, which was received and posted on Twitter by the Connecticut chapter of the American Civil Liberties Union, states that even prisoners who have tested negative for the coronavirus will not be allowed to shower.

“Effective immediately, the showers in the CHU are shut down. This is a statewide Department policy and is in place to prevent transmission of COVID-19. This policy is in effect for all inmates housed in the unit; even after a negative test,” the notice reads.

The CT ACLU says the notice came to them through a family member of incarcerated individual but that their legal team had “independently and separately discovered the same thing.”

“Protecting people from COVID-19 in prisons and jails means increasing access to hygiene methods, not reducing access,” said Claudine Fox, ACLU of Connecticut’s campaign manager. “The DOC’s policy of preventing people from showering is a punitive action, not a public health response.”

Protecting people from COVID-19 in prisons and jails means increasing access to hygiene methods, not reducing access. The DOC’s policy of preventing people from showering is a punitive action, not a public health response.

“There will be no outside of cell recreation and no showers. You will be provided all hygiene products and a towel to wash in the cell,” the orientation notice says. “We are leaning on the guidance provided by the Centers for Disease Control and Prevention and the CT Department of Health.”

On April 8, the CT Department of Health said that all COVID-positive prisoners would be transferred to Northern Correctional Institution, but it now appears the practice of restricting showers has become a widespread state policy in Connecticut’s prisons.

However, the CDC guidelines for prisons does not address restrictions on showering for COVID positive prisoners.

Rather, it recommends isolating them from other prisoners and says that if the prisoner tests negative they can be returned to the prison population. It also recommends good hygiene for all incarcerated individuals.

The CT ACLU has filed a class-action lawsuit against Gov. Ned Lamont and his administration asking the court to order Lamont and the DOC to “safely release medically vulnerable incarcerated people and to create a plan to protect any people who remain incarcerated.”

Part of the suit includes “inadequate or nonexistent access to hygiene and cleaning supplies.”

An affidavit filed by inmate Christopher Russell, who was transferred from Bridgeport Correctional Center to Northern Correctional Institution after he began experiencing coronavirus symptoms, discusses the lack of showers for COVID positive inmates.

Russell says he was given a care package of a toothbrush, toothpaste, soap and shampoo. “But it’s not very useful because we can’t shower. If we want to wash, we have to do so in the sink, which is not clean.”

Reached for comment, the DOC issued a statement saying that it is following CDC protocols.

CDC guidelines speak to the increased risk for pathogen exposure and infection through aerosols. Knowing that showers, both hot and cold, produce aerosols and droplets, our current policy substitutes showers for in-cell washing with a basin and appropriate hygiene supplies for the quarantine and isolation units only.

“CDC guidelines speak to the increased risk for pathogen exposure and infection through aerosols. Knowing that showers, both hot and cold, produce aerosols and droplets, our current policy substitutes showers for in-cell washing with a basin and appropriate hygiene supplies for the quarantine and isolation units only,” the DOC said.

According to the Department of Public Health 526 prisoners have tested positive for COVID-19, 419 have recovered and there have been six deaths. DPH lists 10 cases at Cheshire Correctional Institution.

The state has been releasing medically vulnerable inmates and, as of April 6, the DOC reported releasing 700 people who were approved for early release.

The DOC says it faces “unique challenges” in the prison environment and have “acted with an abundance of caution when creating internal policy,” including doubling the amount of time an inmate must remain in isolation after the onset of symptoms to 14 days.

It also says that the timeframe for an inmate’s quarantine “may need to be extended if a person experiences a new exposure with a symptomatic COVID case that was considered to be in close contact for a prolonged period.”

However, that could mean an extended period of time without a shower for those inmates.

Fox says the DOC is simply spreading bad policy from Northern Correctional Institution to other facilities.

“Preventing the spread of COVID-19 in prisons and jails should begin with releases to increase social distancing, not stopping people from bathing,” Fox said. “Exporting a cruel existing policy from Northern’s COVID unit to other facilities is just doubling down on bad ideas.”

The DOC says that it’s open to revising its plans in the future. “We continue to revise our treatment and management plans with the evolving guidance from the disease experts. All efforts are aimed at protecting the incarcerated population and the employees that care for them.”