Connecticut has second highest percentage of workforce unemployed in the country 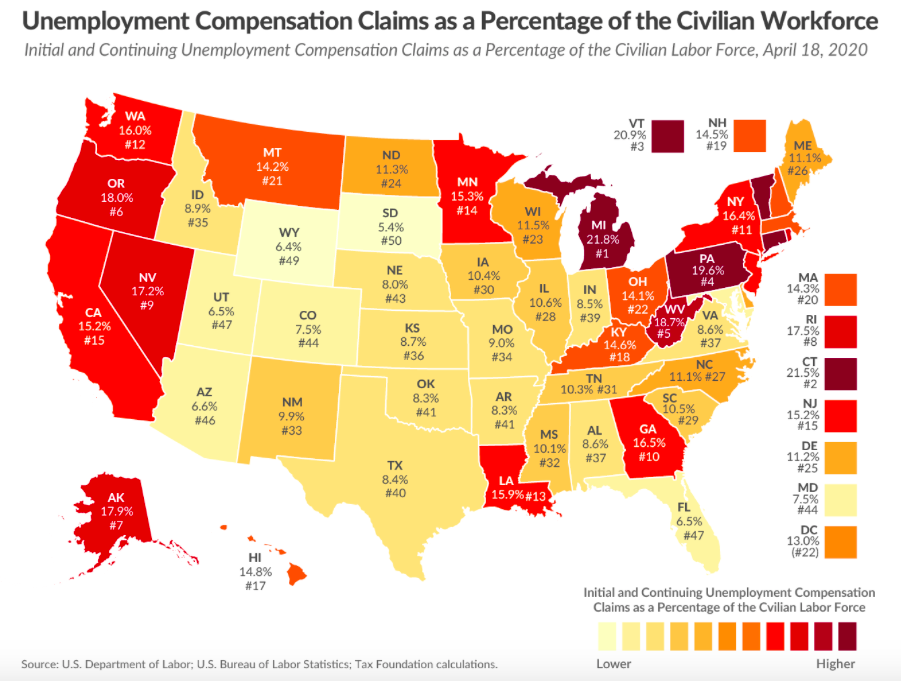 More than 21 percent of Connecticut’s workforce has filed for unemployment, the second highest rate in the country, according to a new report from the Tax Foundation.

The Tax Foundation based its report on figures from the U.S. Department of Labor for the week ending April 18. Connecticut saw 102,757 people file initial claims for unemployment that week, an increase of 68,707 over the preceding week.

The week ending April 11 recorded a total number of 308,614 individuals who had applied for or were receiving benefits, according to the U.S. DOL.

According to the Tax Foundation, the number of Connecticut residents applying for or receiving benefits amounts to 21.5 percent of the civilian workforce. The only state with a higher percentage was Michigan with 21.8 percent.

“Mandatory business closures and shelter-in-place orders have radically accelerated job losses compared to the steadier pace of layoffs in prior recessions, meaning these claims likely represent a far greater share of the ultimate total than did any week’s claims during the Great Recession,” wrote Tax Foundation analysts Jared Walczak and Tom VanAntwerp. “But the numbers are still staggering, with every likelihood of sobering numbers in coming weeks as well.”

Connecticut has seen more than 400,000 unemployment benefit claims since Gov. Ned Lamont issued an executive order closing all nonessential businesses to the public in response to the COVID-19 pandemic.

The closures have severely affected restaurants, bars, gyms and retail outlets, although grocery stores and a number of other businesses have been allowed to remain open to the public while following social distancing protocols.

During his press conference on April 23, Lamont said roughly 150,000 unemployment claims have come from Connecticut’s hospitality sector, which includes restaurants and hotels, among other businesses.

The high unemployment figures come as Lamont announced the formation of the Reopen Connecticut Advisory Group, which includes a number of subgroups focused on health, business and education.

Co-chair of the advisory group, Indra Nooyi, said the group will devise a reopening strategy to deliver to the governor by May 20, but that the state will not begin to reopen until sometime in June. Nooyi said the reopening could be based on geography or industry, depending on the spread of the virus and infection rates.

Those filing for unemployment are able to receive money from both the state and the federal government.

Although Connecticut’s Department of Labor was initially overwhelmed with the number of filings, a software update has allowed them to process claims more quickly. The initial unemployment payout is backdated to the time of initial filing.

Connecticut’s Unemployment Insurance Trust Fund, however, only had half the funding needed to weather a recession when the pandemic hit. Depending on the length of the shutdown and economic recession, the fund may require help.

Connecticut currently has roughly $2.5 billion in its reserve fund and Lamont is asking the federal government for further assistance for unemployment claims.

States are lobbying the federal government for another stimulus package to help states face the fiscal fallout from the pandemic, although Republican Senate Leader Mitch McConnell, R-Kentucky, has shot down the idea.

According to the Tax Foundation, approximately 12.5 percent of the country’s civilian workforce has applied for or is receiving unemployment benefits, almost triple the number during the peak of the 2008 recession.

During 2008 recession, Connecticut saw an average of 5,102 unemployment claims per week with a high of 13,023, according to a previous report by the Tax Foundation.

But the pandemic and shutdown of businesses has accelerated Connecticut’s unemployment filings to numbers never experienced before, with 102,000 filing during the week ending April 18.

Groups of protesters have started pushing for states to reopen their economies, including in Connecticut where protesters staged a mostly-drive-by protest outside the Capitol and Governor’s Mansion.

The Reopen Connecticut Advisory Group will work on a reopening strategy in tandem with a regional group made up of appointees from surrounding states that will help determine when states can safely begin to reopen.

“I’m as anxious to reopen our economy and get back to business as usual as everyone else, but if we don’t do this in a thoughtful way, all of our efforts to mitigate the spread of this virus to date will have been worthless,”Lamont said in an April 23 press release.

“The actions we’ve taken so far in Connecticut, while painstaking, have been helping to slow down its spread,” Lamont said.