Parents, teachers struggle to cope with working and schooling their children from home 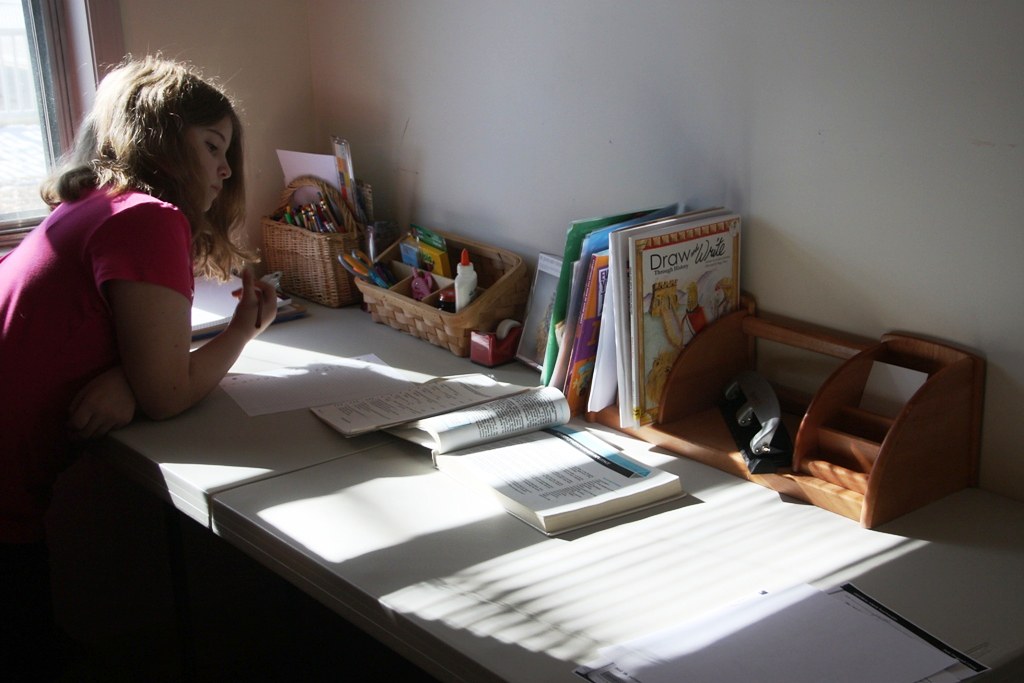 With Connecticut schools closed beyond April 20 – and possibly for the rest of the school year – parents are finding themselves in the position of having to work from home and also ensure their children are still completing school assignments via distance learning.

Rachael Placentino, a Harwinton resident and first grade teacher at the Vogel-Wetmore Elementary School in Torrington, has to balance creating distance learning lesson plans for her students as well as helping teach and monitor her own two elementary school children at home.

“It’s challenging, I’m not going to lie,” Placentino said. “I miss my students. I miss the normalcy we all had, and the parents who I talk to say their kids miss it, too. It’s a huge challenge for everyone.”

With both her work-life and home-life now combined, Placentino tries to get her second and third grader set up for their distance learning schedules early in the morning, before emailing her students’ parents and sending out the assignments for the day.

It’s challenging, I’m not going to lie. I miss my students. I miss the normalcy we all had and the parents who I talk to say their kids miss it, too. It’s a huge challenge for everyone.

“I try to give my kids as much of a routine as possible. I check everything before they send it to their teachers,” Placentino said. “It’s a lot more work with my own students and with my own kids. I think this is going to be a huge eye-opener for parents.”

Megan Caron of Thomaston is trying to school her two children in grades ten and six, and her nephew who is in first grade. She was just laid off from her job as a coordinator at a physical therapy office in Litchfield because the COVID-19 pandemic essentially ended business. She now spends her days helping educate her children.

Her sixth-grade daughter has severe ADHD and autism, presenting a more difficult challenge.

“It’s been a rollercoaster for her and I’m trying to not make this a traumatic experience, as all parents are,” Caron said. “The distance learning system is not set up for someone with her needs. She gets the same curriculum as everyone else. It’s only been a week and she’s already far behind. It’s very frustrating.”

“She’s a very black and white person,” Caron said of her sixth-grader, “and we’re in a very gray area. The whole world is.”

It’s been a rollercoaster for her and I’m trying to not make this a traumatic experience, as all parents are.

To those with children enrolled in public schools, this all may seem like business as usual for parents who homeschool their children, but the shutdown of parks, museums, libraries and other public spaces is taking its toll on homeschoolers as well.

Diane Connors, founder and co-president of the CT Homeschool Network, the largest homeschool organization in Connecticut, says life under the COVID-19 shut down “is certainly not typical of a regular day” for homeschoolers in Connecticut.

“Homeschooled students are now ‘at home’ like all other Connecticut students,” Connors said in an email. “Co-op classes, field trips, visits with friends and family, vacations, museum trips, guitar lessons, martial arts classes, shared learning experiences, dances, ets., are all part of the daily homeschool experience and they are now on hold.”

“Homeschoolers are adapting as needed, as everyone is,” Connors said.

The quick closure of public schools and the institution of distance learning for those children now stuck at home has required a fast and difficult adjustment for families across the state, as well as for school districts and teachers.

Students don’t need to be sitting at the kitchen table or computer for six hours a day doing academics. Keep this entire experience as stress-free as possible as individual families across our state adapt as best we can.

“Of course, there are extenuating factors as some families do not have internet access, computers, or have shared Wi-Fi with enough devices – so internet service is lagging at times,” Connors said. “The districts have a big task to deal with and they are doing it.”

Internet access, however, is a challenge for some families who do not have the computers or devices necessary for distance learning. School districts and private donors are working in-tandem to try to expand access for those families.

The Partnership for Connecticut – a joint nonprofit venture between the Dalio Foundation and the State of Connecticut — is providing 60,000 laptops for high school students in struggling Alliance District schools but acquiring and distributing such a large number of laptops faces delay.

In the meantime, school districts are distributing however many laptops they can provide, but, in some cases, internet access remains a challenge.

Shkeia Dickerson of Meriden, who has 13-year old son and two daughters aged 11 and 7, says she’s having to homeschool her children with books and YouTube videos that she can access on her phone because she doesn’t have cable internet.

“It’s tough to do school from home,” Dickerson said. “I have some of my own books and we’re doing math and history.”

Dickerson says she has to go to the library, so she can apply for a low-income internet package from the cable company, but a backlog of applicants means she may not be able to get access for weeks and the library has limited hours to enforce social distancing.

We’re kind of stuck in limbo.

“There’s so many applicants ahead of me,” Dickerson said. “I touched base with my children’s teachers. They’re kind of missing out, but also not missing out because we’re homeschooling. We’re kind of stuck in limbo.”

School districts will also be offering packages of Scholastic books donated by Indra and Raj Nooyi, of the Pepsi Corporation, according to the Connecticut Post.

The CT Homeschool Network has free resources and curriculums available for parents, as well as links to learning apps younger grade levels that could be helpful for parents with limited internet access.

Connors recommends doing “unit studies,” which involves focusing on one specific area of learning for an extended period of time. “It’s a great way to do a deep dive,” Connors said. “Once a topic is completed, choose another one.”

Placentino says in Torrington children are able to learn at their own pace and focus on particular study areas. “If there’s ten different lessons set up and the student wants to do math all day, they can do math all day.”

“The public and private schools are doing their best to acclimate to this rapid change for hundreds of thousands of our Connecticut children,” Connors said.

“Students don’t need to be sitting at the kitchen table or computer for six hours a day doing academics. Keep this entire experience as stress-free as possible as individual families across our state adapt as best we can,” Connors said.