Dalio Foundation funding in Connecticut: Where does it go? 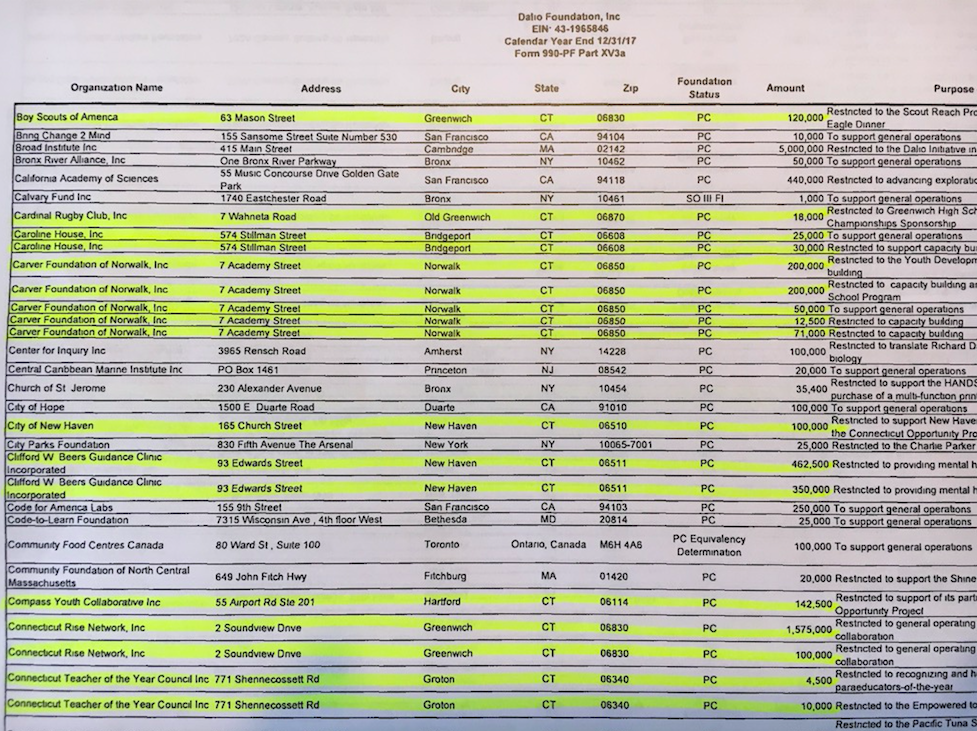 The Dalio Foundation which, in partnership with the state of Connecticut, is set to oversee upwards of $300 million in public and private funds to help Connecticut’s underperforming schools, managed total net assets of $778 million and made gifts, grants and contributions totaling $109.2 million, according to the organization’s 2017 990 tax filings.

The Dalio Foundation is funded by billionaire hedge fund investor Raymond Dalio and is managed by his wife, Barbara Dalio, who is listed as a principal for The Partnership for Connecticut’s corporate filings with the Office of the Secretary of State.

The gifts, grants and contributions ranged from organizations across the United States to London and to Dalio’s Public Welfare Foundation in Beijing, China.

In Connecticut, the Dalio Foundation contributed $8.7 million to multiple organizations based in 15 Connecticut towns and cities. Contributions ranged from mental health programs to public and charter schools and the Greenwich Town Party.

Below is a list of the foundation’s ten largest Connecticut donations in 2017.

The Partnership for Connecticut was formed with a $100 million donation from the Dalio Foundation that will be paid over five years, combined with a matching investment by the state. The Partnership will seek an additional $100 million from other charitable organizations and investors.

Despite the generous donation, The Partnership for Connecticut has been the subject of some controversy.

Passed as part of the 2019 budget deal, some lawmakers and media were upset when they learned non-legislative members of the partnership’s board would not be subject to state Freedom of Information laws.

Lawmakers recently rejected a request by Dalio Philanthropies for $247,500 in pay for a CEO of The Partnership for Connecticut, along with an initial $425,000 initial operating budget, creation of a five-member executive subcommittee, election of board officers and approval of a transparency statement, according to a report by CT Mirror.

The subcommittee suggested by Dalio Philanthropies would have had the power of the entire board but without public oversight because it would have excluded state officials.

Lawmakers were also asked to approve Erik Clemmons for the position of president of the partnership. Clemmons is president and CEO of the Connecticut Center for Arts and Technology and was also listed on the partnership’s corporate filings.

Barbara Dalio was recommended for the position of vice president of the partnership, but, to date, no board officers have been approved.

None of the five directors of the Dalio Foundation – including Raymond and Barbara Dalio — listed a salary for their work for the foundation, according to the organization’s tax filings.