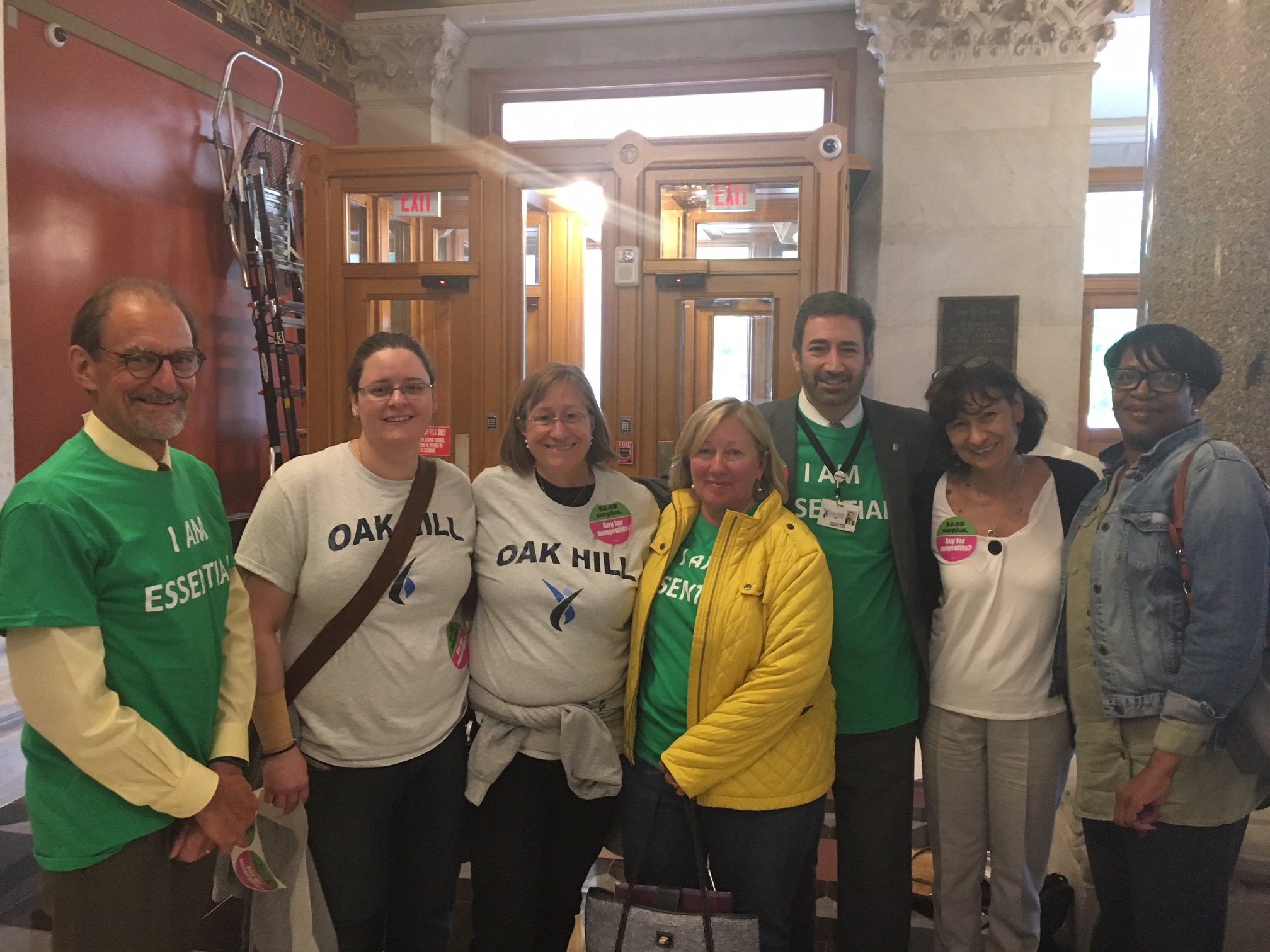 Connecticut is undercutting private, nonprofit organizations that serve Connecticut’s neediest citizens through a lack of funding, competition for employees and the state’s rising minimum wage.

That’s according to nonprofit leaders, workers and clients who came to the Capitol Thursday to tell lawmakers they need more funding for services as the General Assembly gets ready to debate and possibly pass a new two-year budget.

And since the state has steadfastly refused to raise Medicaid reimbursements for private providers – while increasing rates for unionized personal care attendants – the nonprofit organizations are pushing lawmakers to tap the $2 billion rainy day fund.

Wearing green shirts that read “I am essential” and stickers touting the “$2.6 billion surplus,” a group from Oak Hill — the state’s largest private provider of disability services — said it’s time the legislature directed more resources to nonprofits which can provide the same services as state social service agencies at between one-third and half the cost.

Oak Hill runs group homes for the developmentally disabled but Oak Hill President Barry M. Simon says they are suffering from staff shortages and razor-thin funding because the state has not increased their Medicaid reimbursement despite rising costs.

“We’ve been going over a decade with no resources, no rate increases from the state,” Simon said. “We are a solution for the state to actually spend less dollars and get higher quality care and serve more people.”

Simon says as Connecticut has faced continuing budget problems over the years, lawmakers have said they weren’t able to help the nonprofits.

“Now that the budget is in a better place, now they’re telling us they can’t give us any dollars either because they can’t spend it out of surplus,” Simon said. “Our computers are getting tired, our staff are getting tired and the people that we serve deserve quality care.”

While not receiving Medicaid rate increases, nonprofits also face rising costs because of the state.

One of those rising costs is the state’s minimum wage, which is set to increase to $15 per hour after the bill passed the General Assembly and was signed into law by Gov. Ned Lamont.

Anita Ustjanauskas, Vice President of Community Programs for Oak Hill, says their organizations has slowly increased their wages to $15 per hour already but raising the state’s lowest wage to match theirs will leave them competing for labor.

“Once it hits $15, you can go flip burgers at McDonalds for the same amount,” Ustjanauskas said. “The amount of work to care for these patients… we deal with behaviorally involved people that may involve restraint, we have to drive vans, wheelchairs, it is so much more complicated than working at Walmart or Amazon.”

And it isn’t just fast food restaurants and retailers that Oak Hill has to compete with for workers. Ustajanauskas says they’ve lost numerous employees, particularly managers, to state jobs.

“Right now, we have six registered nurse positions vacant because we can’t hire at competitive wages,” Ustjanauskas said. “We have managers that are continually leaving for higher-paying jobs, many of them with the state to work for DDS [Department of Developmental Services].”

Ustjanauskas says last year they had to close ten programs and take clients out of the homes they’ve lived in for thirty years or transfer clients to other organizations. “For some people their life will never be the same,” she said. “We’re stuck.”

Oak Hill can’t compete with the state in terms of compensation or benefits and it marks another instance of Connecticut competing against its own industries and social service providers.

Private nonprofits have noted in the past that they provide the same services as state agencies at almost one-third the cost and without the added burdens on the state for long-term pensions and retiree medical benefits.

Simon says they’re not advocating for state employee lay-offs – which isn’t even possible until 2021 under the SEBAC agreement – but rather that Connecticut could reduce waiting lists and make more staff available to reduce overtime spending – all while saving money.

The Alliance – a coalition of nonprofit service providers — says the state could save as much as $152,000 per client, per year by switching more services to nonprofit providers. Those figures were based on a 2009 study by the General Assembly’s Program Review and Investigations Committee.

DDS’s total overtime spending is down 12.6 percent this year, according to the Office of Fiscal Analysis.

Karen Neag, whose 22-year old daughter is care for in an Oak Hill group home, says her daughter’s care is a “benchmark” for what many disabled people need.

“The cuts have been going on and on and on for several years now, Neag said. “I’m here to advocate for dollars for people like my daughter, Stephanie, and others like her.”

“It takes a lot to keep my daughter supported,” Neag said.