Union Bill Passes in the House of Representatives 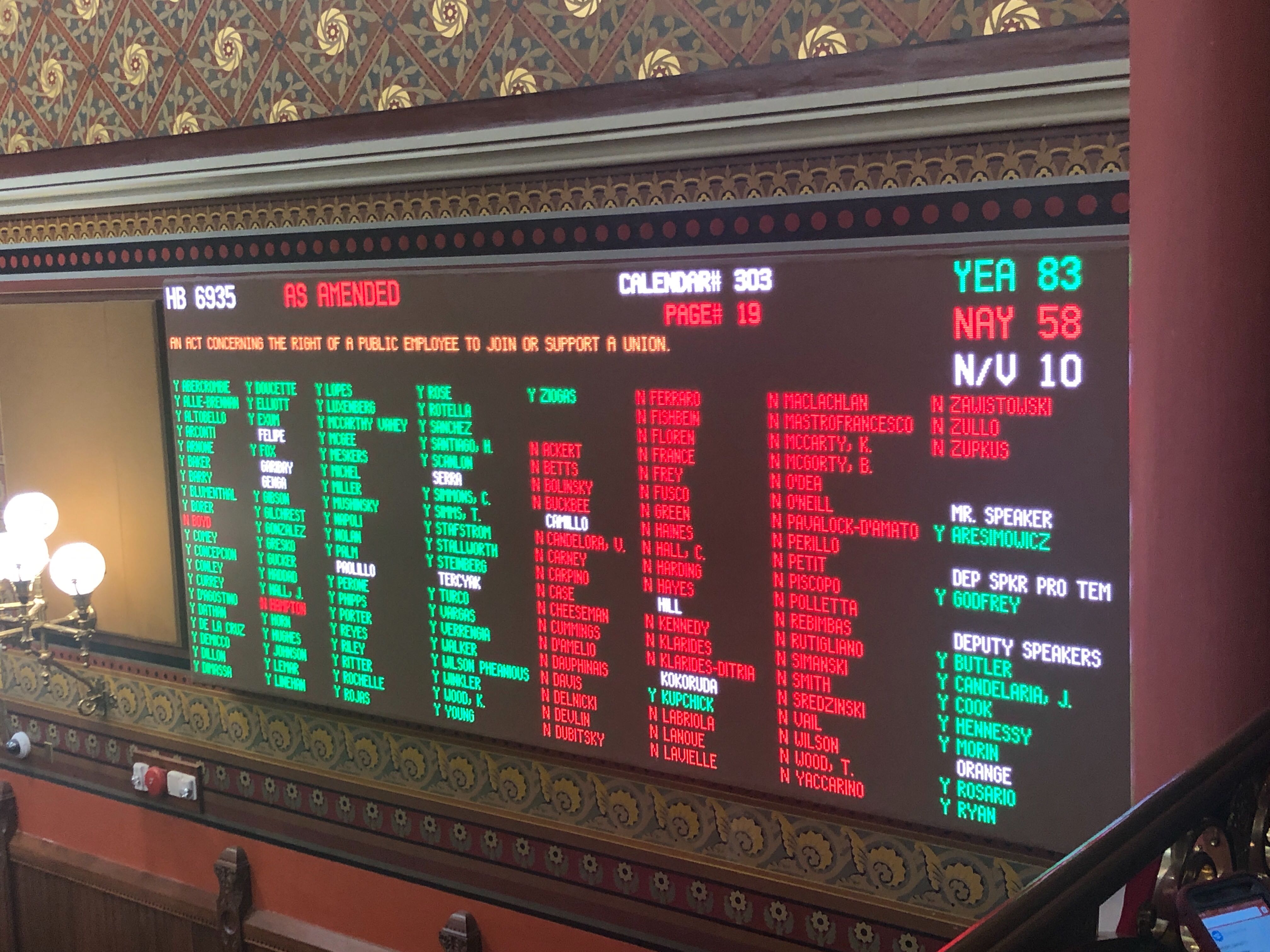 A watered-down version of a pro-union bill, which sought to give union leaders access to employee’s personal information and codify dues authorizations into state law, passed late Wednesday night in the House of Representatives.

In an effort to avoid a long fight in the House with only a few days left of the legislative session, Democrats and Republicans negotiated behind closed-doors, releasing a final bill just minutes before bringing it to the floor.

Discussion lasted little more than half an hour as some of the controversial provisions were stripped out or altered, but the vote was still largely along party lines.

According to the legislation, employees would have an option as to whether or not to provide their personal contact information to union representatives. An employee can revoke the union’s ability to communicate with them regarding anything but collective bargaining issues at any time.

However, several provisions from the original bill remain in place: union representatives will have access to new employee orientations, can use public facilities, phones and email systems to communicate with members, the state must honor dues authorizations in union membership cards and unions do not have to provide membership verification to the employer unless a dispute arises.

Not requiring the unions to provide membership and dues authorizations, however, may violate the Janus v. AFSCME decision.

According to the Supreme Court ruling, “neither an agency fee nor any other form of payment to a public-sector union may be deducted from an employee, nor may any other attempt be made to collect such payment, unless the employee affirmatively consents to pay.”

Under HB 6935, the state would not receive notice of a new employee’s dues authorization other than through the union.

Dues authorization windows are another sticky subject and have been facing court challenges in other states. Essentially, a member can resign from the union but would still be forced to pay union dues until a set window of time outlined in the membership card.

Despite a long list of potential amendments that could have been called to the floor, the only vote taken was on an amendment which required unions to hold recertification elections every four years, allowing bargaining unit members to vote on which union represents them.

Rep. Craig Fishbein, R-Wallingford, called the amendment, saying the bill — entitled An Act Concerning the Right of an Employee to Join or Support a Union — should include a provision that requires certification elections to ensure the union is supported by employees.

Rep. Michael D’Agostino, D-Hamden, who was the lead proponent of the legislation, argued that the right to decertify is collectively bargained and union members already have the ability to decertify or recertify a union, although that ability varies contract to contract.

But that may not always be the case. A Connecticut Superior Court decision in 2012 said Connecticut state employees were not allowed to decertify under an unknown provision in the 2011 SEBAC contract.

The provision appears to indicate there is a window of time following the ratification of an agreement during which bargaining unit members cannot vote to decertify from a union.

The decertification amendment was defeated by the Democrat majority.

The legislation also prevents the state from knowingly aiding any outside organization in informing public-sector workers of their Janus rights or encouraging them to resign membership.

The provision was likely in response to freedom of information requests from outside organizations that gained employee contact information and sent emails and flyers encouraging employees to resign membership in the wake of the Janus decision.

The bill will now be forwarded to the Senate, which is set to debate a pro-union “captive audience bill” which could face a protracted fight.

Plus, of course, there is the budget to contend with, as Gov. Ned Lamont and progressives in the legislature fight over higher taxes on the wealthy.

Lamont also threw another wild card into the mix by flip-flopping on tolls once again and saying he wants to push toll legislation this session rather than waiting for a special session in the summer.

The renewed push for tolls comes following a blow-out of another significant piece of legislation that would have offered a public health insurance option.

State Comptroller Kevin Lembo said that insurance giant Cigna threatened to move company headquarters if the bill passed. Cigna has denied they ever made such a threat, but the maelstrom effectively killed the bill.

With other high-priority Democratic agenda items on the table as the session winds down, the fate of HB 6935 and various other pieces of legislation remains to be seen.