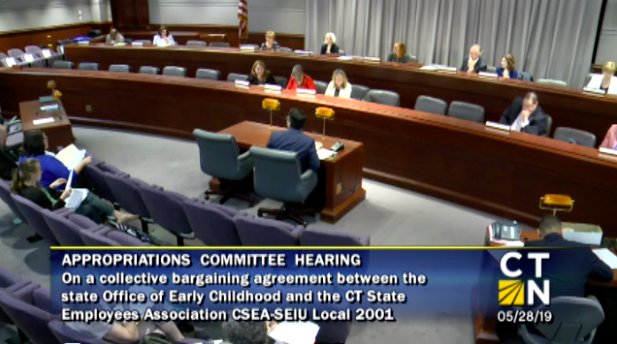 The Appropriations Committee today approved $8 million in raises for both licensed and unlicensed child care providers under a union contract with the Connecticut Employees Independent Local 2001 SEIU.

Unlicensed providers include family members of low-income individuals who care for nieces, nephews and grandchildren out of their homes.

Connecticut is the only state that has unionized unlicensed providers besides Washington, although Office of Early Childhood Commissioner Beth Bye said she thought there was one other state that might have unionized providers.

The funds are provided child care funds through the state’s Office of Early Childhood and the Care4Kids program, which is funded by both the state and the federal government.

The pay rates for unlicensed providers is tied to one-third of the state’s minimum wage per child and the fiscal analysis accounts for Connecticut’s $15 minimum wage bill which Gov. Ned Lamont’s signed today.

There is also a lump-sum payment that ranges from $600 for unlicensed providers and $1,200 for licensed providers if they have provided care for three consecutive years. There are additional payments for providers with an Associates Degree or national accreditation.

The state subsidy is meant to help offset costs for family members caring for children, so their parents can go to work.

According to testimony submitted on behalf of the Office of Policy and Management, S. Fae Brown-Brewton wrote the average yearly subsidy for unlicensed providers is $6,000 per year, although the number fluctuates depending on the number of children being cared for.

The fiscal note says the state has the available funds, thanks to more than $15 million in General Fund revenue expected to be carried over from the previous year.

Although child care providers are not required to join the union, the collective bargaining contract stipulates that the state must turn over all personal information for providers to the union every month and that providers attend a union orientation.

According to the current contract, the orientation is so union representatives can “speak with the providers about Union membership, benefits, and Union representation.”

The contract now goes before to the General Assembly for approval. A number of new contracts have been debated and passed in the House of Representatives so far this year, including a new contract for State Police.