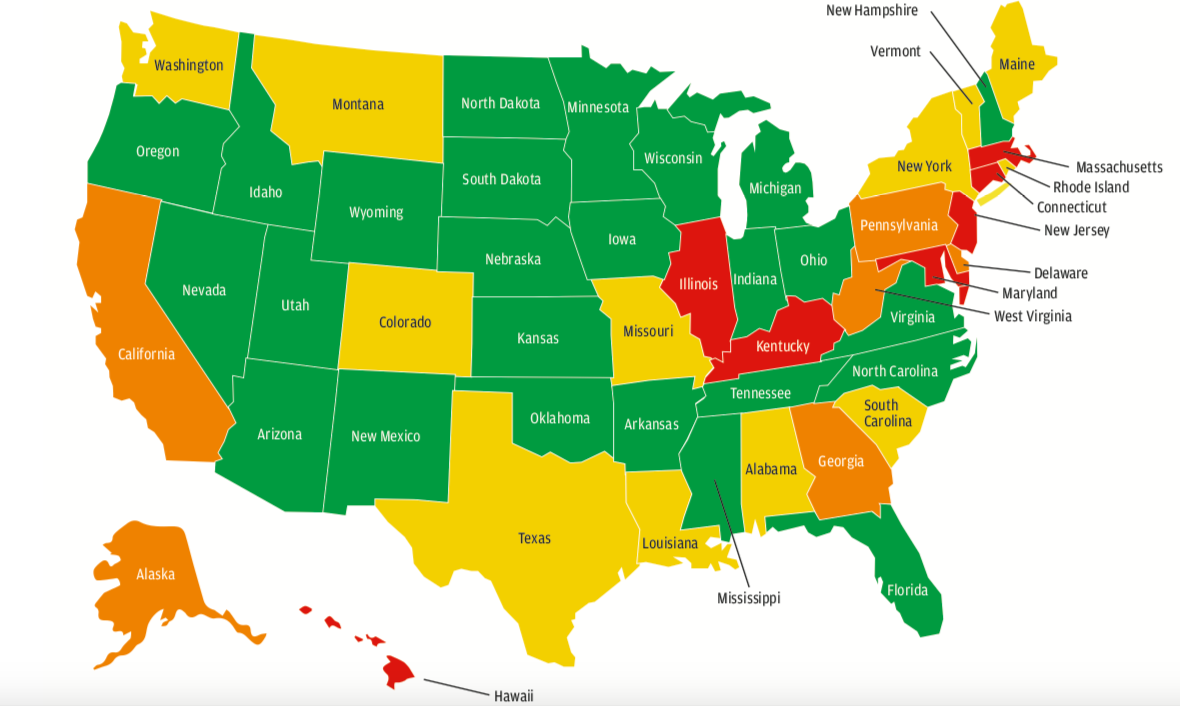 Connecticut would have to pay 35 percent of its total revenue for the next 30 years to cover all its retirement obligations to state employees and teachers, according to a report released by JP Morgan.

That figure is much higher than the 23 percent Connecticut is currently paying, as listed in JP Morgan’s 2018 ARC and the Covenants, an annual report that examines state pension and retiree healthcare liabilities. ARC refers to the Annual Required Contribution the state has to make in order to fund pensions and retirement benefits.

The potential solutions raised in the report highlight Connecticut’s catch-22 when it comes to unfunded retirement benefits: increase revenue by 12 percent, increase employee contributions by 408 percent, or see a 10.5 percent investment return every year.

Author of the report Michael Cemblast writes the increased tax revenue would have to be used solely for the unfunded liabilities and that he considers consistent double-digit returns “practically unachievable.”

State employees currently contribute between 3 and 6 percent of their pay toward pensions depending on their retirement plan, with an additional 3 percent for their first 10 years of employment toward retiree health benefits.

Teachers contribute 8.25 percent of pay toward their pension and health benefits but are ineligible for social security.

Connecticut was fourth behind Illinois, New Jersey and Hawaii for how much of its total revenue would be required to pay off its unfunded retirement liabilities over the next 30 years.

JP Morgan’s figures were based on 2017 State Annual Financial Reports. The report assumes a 6 percent investment return on pension and other post-employment benefits investments.

However, this assumes that states like IL, CT and HI continue allocate 20% – 25% of state revenues to underfunded plans; this may not be feasible forever, given competing needs related to public services, infrastructure and education.

Michael Cemblast, ARC and the Convenants

Cemblast notes his figures assume that “states like IL, CT and HI continue to allocate 20%-25% of state revenues to underfunded plans; this may not be feasible forever, given competing needs related to public services, infrastructure and education. There’s also the risk of market volatility that depresses funding ratios, which would raise ARC payments further.”

Connecticut pensions and retirement health benefits are part of Connecticut’s growing “fixed costs” which make up 53 percent of the budget and have begun to crowd out other state spending. Fringe benefit costs for employees are set to grow $544 million over the next two years largely due to the cost of underfunded retirement benefits.

Connecticut faces a budgetary shortfall this biennium, which has drawn proposals from Gov. Ned Lamont and lawmakers to expand the state sales tax, increase the capital gains tax and continue taxing hospitals.

Cemblast wrote that he believes bankruptcy legislation should be expanded to include states.

“There was a sense that the US should use the Promesa legislation for Puerto Rico as a dry run for creating state-level bankruptcy rules, just in case,” Cemblast wrote. “I think the expansion of Chapter 9 legislation for states makes sense, and I’m not the only one.”

Congress crafted legislation to allow Puerto Rico to declare bankruptcy in 2014 and placed the nation under the control of a panel of financial experts to restructure the finances of the country.