Connecticut has Lowest Pension Funding in the Country, According to Report 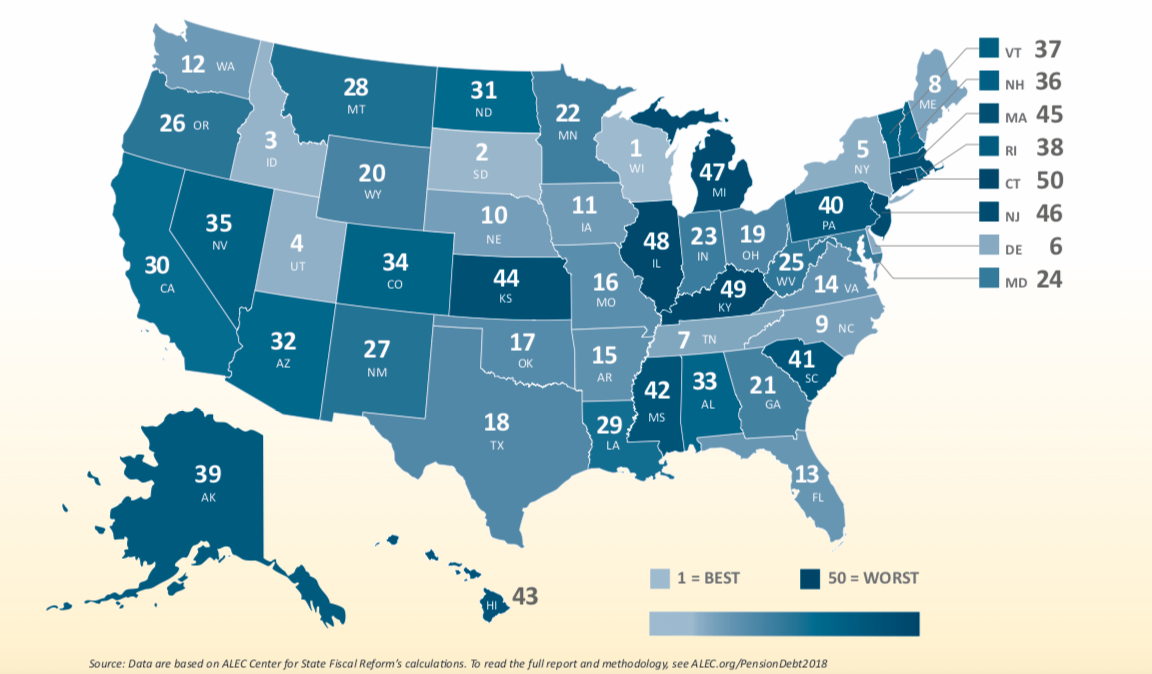 Connecticut has the worst-funded pension system in the country, maintaining its position from last year at the bottom of the list even as state pension payments continue to increase.

The American Legislative Exchange Council released its annual study on state pension systems across country on Wednesday offering different measurements of state pension funding, none of which bode well for Connecticut.

Connecticut’s unfunded pension liability amounts to $32,805 per person in the state and 45.13 percent of Connecticut’s gross state product, according to ALEC’s report.

But Connecticut’s total funding ratio was dead last, with ALEC calculating the state has only 20.28 percent of the money necessary to keep its future promises to state employees and teachers.

ALEC’s calculations differ from the state’s numbers because they use a lower assumed rate of return for pension investments, known as a “discount rate.” The lowered assumptions are considered a “safe” future projection.

Gov. Dannel Malloy and State Employee Retirement Board agreed to lower the SERS rate of return to 6.9 percent from 8 percent in 2017, which increased the unfunded ratio. The more realistic rate of return was coupled with an extension of the state’s payment period to 2046 to avoid a spike in pension costs.

Nevertheless, SERS payments are expected to grow from $1.8 billion this year to $2.2 billion in 2022. Pension payments are part of Connecticut’s growing “fixed costs,” which are driving budget deficits.

Notably worse-off, the teachers’ pension system still assumes an 8 percent return. The Center for Retirement Studies at Boston College warned that failure to meet that rate could drive the cost of those pensions to an unsupportable $6 billion per year.

Former State Treasurer Denise Nappier recommended lowering the TRS discount rate to 6.9 percent and offered her office’s opinion that costs were more likely to rise to $3 billion per year by 2032.

Although, teacher pensions are set in statute, changes can be politically difficult for lawmakers. A number of solutions have been proposed by Gov. Ned Lamont and others, which include shifting part of the pension costs on to municipalities and dedicating lottery revenue to the teachers’ pension fund.

Lamont proposed adjusting state retirees’ annual cost of living adjustments to save $141 million by year 2021, but so far there are no indications the governor has been negotiating these changes with union leaders.

According to ALEC’s report, Wisconsin had the best-funded pension system in the country, with 60 percent of its liabilities funded.

The total pension liability across all 50 states was estimated at 5.96 trillion, according to ALEC’s study.