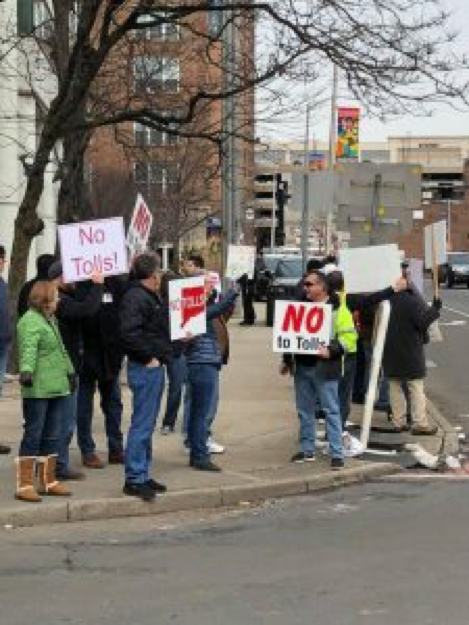 According to Raised Bill 7280, the General Assembly will have only 15 days to vote on tolling recommendations from the Connecticut Department of Transportation after an informational hearing, otherwise the tolling proposal will pass and be submitted to the Federal Highway Administration.

The DOT may then begin construction of the tolling gantries on the proposed roads and enter into agreements with toll operators, according to the language in the bill.

Although the bill specifies DOT shall make recommendations for tolls on I-84, I-95, I-91 and the Merritt Parkway – similar to the governor’s bill – it also leaves open the possibility for tolls on other highways as well.

The tolling proposal “may include implementing electronic tolling systems on other limited access highways, or portions thereof, if the commissioner determines such implementation is necessary and provides the rationale for such implementation.”

The DOT’s latest tolling study called for 82 tolling gantries on all highways throughout the state to raise $1 billion in yearly revenue. Gov. Lamont has proposed tolling only the interstates and the Merritt Parkway, but reversed his campaign pledge to only toll trucks.

Although this is not first time the legislature will have ceded its authority through a deemed approved clause, the fifteen-day limit is short. Until 2017, union contracts were deemed approved after 30 days, resulting in 124 contracts being passed without a vote in either chamber between 1991 and 2017.

Despite the bill’s language allowing the state to immediately begin construction of the toll gantries, the state would still need the approval of the Federal Highway Administration, which has already said Connecticut is in “new territory,” because no other state has undertaken tolling existing highways – and certainly not all the existing highways.

But time may be of the essence for the state’s Special Transportation Fund. Gov. In his budget proposal, Gov. Ned Lamont balances the state budget, in part, by withholding sales tax revenue from the STF, leaving the fund bankrupt within two years and depriving the transportation fund by over $729 million by 2024.

Unless the tolls are up and running by that point, the state’s ability to borrow and spend money on fixing roads and bridges could be in serious jeopardy.

Lamont hopes the tolls will be installed and collecting revenue by 2023.

The bill would also create the Connecticut Transportation Finance Authority, made up of thirteen members including three senators, three representatives, gubernatorial appointees and commissioners of various state departments, including DOT.

The Transportation Authority will be able to set toll rates, approve capital plans, establish an “infrastructure bank” and issue bonds.

The bill crafted by the Transportation Committee constitutes a wish-list for Democratic leadership, which has pushed separate bills in the past for tolls or a transportation authority with the ability to implement tolls and an infrastructure bank.

The bill is one of several which will receive a public hearing before the Transportation Committee on Wednesday March 6, but the anti-toll movement in Connecticut has been gaining steam over recent weeks.

No Tolls CT has held a series of rallies across the state, prompting some local transportation committees to recommend passing town resolutions against tolls in Trumbull and Stamford. The Town of Enfield passed a resolution opposing tolls.