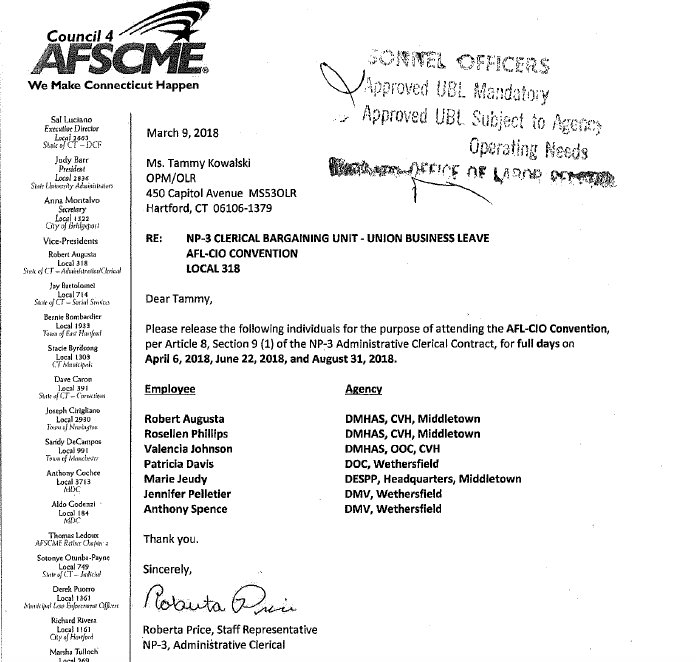 The Connecticut Board of Labor Relations approved full day union business leave and pay for union officials to attend an August 31 Connecticut AFL-CIO convention in Hartford that was scheduled to last only three hours, according to documents obtained under a Freedom of Information Act request.

A total of 47 state employees were granted a full day leave on the day of the convention, according to information received from the State Comptroller’s Office.

Twenty-seven of those full-day permissions were granted specifically for AFSCME members to attend the three hour CT AFL-CIO convention during which union delegates finalized their support for political candidates, according to the documents.

Thirteen employees received approval for union business leave for steward training but were members of other unions such as Connecticut Employees Union Independent SEIU 511. SEIU is not affiliated with the AFL-CIO.

The remaining seven permissions were only listed as “union business leave.”

Chris McClure, spokesman for the Office of Policy and Management, said the leave time is dictated by the bargaining unit contracts.

“The language of each applicable labor agreement prevails, and that language generally provides for ‘days’ for this type of sanctioned activity,” McClure wrote in an email. “This is intended to include reasonable travel time and the conduct of union business, such as ad hoc meetings that would take place, that are outside of the clocked time of the convention.”

Former president of the CT AFL-CIO Lori Pelletier testified before the Labor and Public Employees Committee in 2017 that without union business leave the state would be forced to meet with employees after work hours and delay the handling of employee issues.

Nevertheless, audits and prior studies have found union business leave adds up to millions each year compensating union officials for time spent away from their state job, requiring others to fill that role.

The labor agreement for Connecticut Department of Correction employees expanded the number of person days for union business leave from 500 to 650 for “attending union business related functions.”

DOC accounts for the most overtime spending of all Connecticut state agencies.

2017’s International Convention was held in St. Louis, Missouri. It is not known at this time if any state union delegates attended the convention.

The bank of union business leave hours for those bargaining units were not changed in the latest round of contract agreements.

The P-1 and NP-6 bargaining units represent many employees in Connecticut’s Department of Mental Health and Addiction Services and the Department of Developmental Services, which also account for a significant portion of state overtime spending.