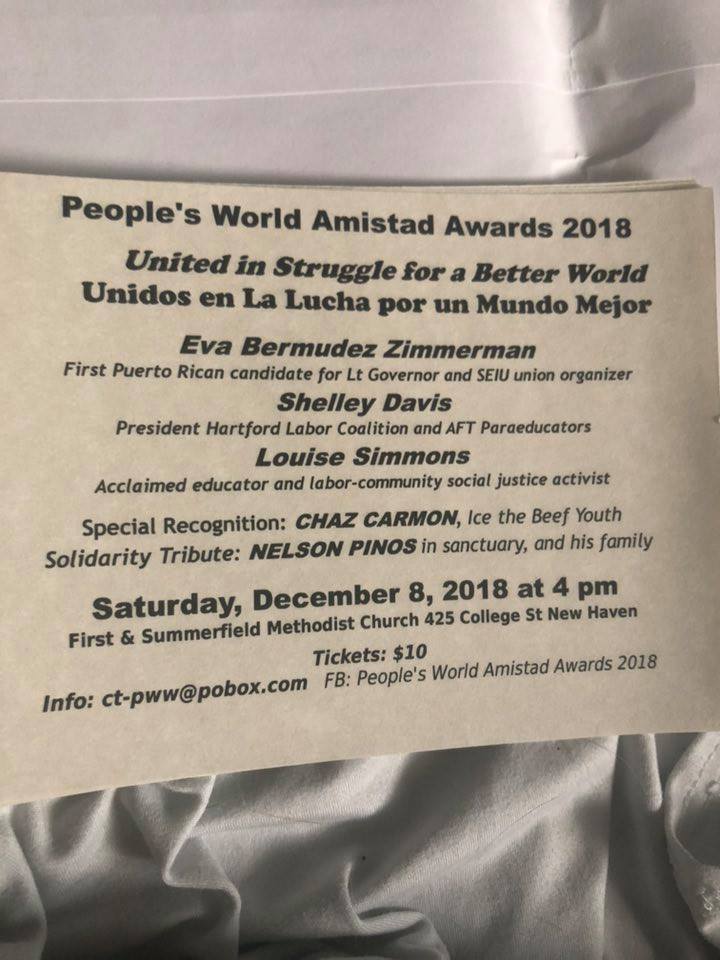 It was not the first time that union officials have been presented with the Amistad Award, sponsored by the Connecticut Communist Party USA.

Davis and Zimmerman received the award presented by the Connecticut People’s World Committee on the “99th anniversary of the Communist Party USA,” according to the announcement on the blog Connecticut People Before Profits.

Davis is a paraeducator in the Hartford Public School System and official with the American Federation of Teachers.

Zimmerman took a leave of absence from SEIU as an organizer for child care workers for her campaign and is married to Stacy Zimmerman, associate director of SEIU.

In 2016, attorney and chief negotiator for SEBAC Dan Livingston received the Amistad Award, along with Juan Brito, member of the Hartford Federation of Teachers.

The event is hosted annually by Joelle Fishman, who chairs the Connecticut Communist Party.

The awards are given to those who are “fierce warriors in the forefront demanding workers’ and immigrant rights, social justice, peace and equality for a better and sustainable world,” according to People Before Profits.

The award comes little more than a month after SEIU and other unions made a hard and largely successful push to back candidates in the Connecticut 2018 gubernatorial and legislative elections through canvassing, independent expenditures, disbursements and communications with their members.

While the Connecticut Communist Party does not have statewide enrollment privileges, it does consider the AFL-CIO and Working Families Party allies and encouraged members to participate with both organizations during the 2018 election.

The WFP is able to cross-endorse candidates and has a ballot line in local and statewide elections.

In an article published by Communist Party USA, Fishman cited the election of Julie Kushner to Connecticut’s state senate as evidence of labor’s powerful presence during the 2018 election.

Kushner is co-chair of the Working Families Party and a United Auto Workers organizer. She was one of four legislative candidates heavily backed by SEIU through independent expenditures. Kushner defeated Republican incumbent Michael McLachlan, R-Danbury.

“Socialism is not a dream, but a necessity to working peoples’ lives. Only socialism has the solutions to the problems of capitalism in this country,” according to CPUSA program statement entitled, The Road to Socialism.