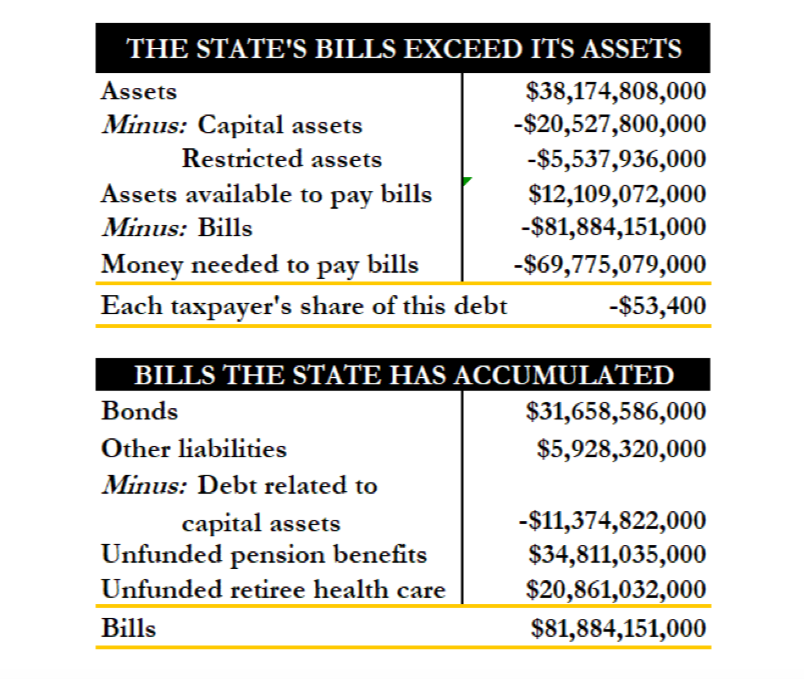 Governor-elect Ned Lamont will face a daunting task when he and fellow Democratic lawmakers assume full control of the state’s finances in January, according to a newly released report by Truth in Accounting.

In a ranking of states based on fiscal health, Connecticut dropped one notch to place 49th in the nation, just ahead of New Jersey.

According to the report based on Connecticut’s annual financial reports, the state has only $12.1 billion in assets but $81.8 billion in debt – a combination of bonded debt, pension and retiree healthcare liabilities.

Truth in Accounting says the debt amounts to $53,400 per taxpayer. “Connecticut would need more than $20,000 from each of its taxpayers to pay all of its bills, so it has received an ‘F’ for its finances from Truth in Accounting.”

The debts cited in the report – along with Medicaid – comprise Connecticut’s ever-growing “fixed costs” which now consume more than 50 percent of the state budget. Year over year growth of fixed costs are cited as the cause for much of Connecticut’s yearly budget deficits.

The report notes that Connecticut’s drop from 48th to 49th in the country is due to a change in the state’s discount rate for pension liabilities.

“The sharp decline in the state’s financial condition corresponds to changes in how its unfunded pension debt is calculated,” the report said.

Gov. Dannel Malloy restructured the State Employee Retirement System debt and lowered the discount rate from 8 percent to 6.9 percent in order to reflect a more realistic rate-of-return assumption for the pension fund.

While the change allows for a more realistic accounting of Connecticut’s pension debt, decreasing the discount rate causes the unfunded liability – and the state’s annual payments — to increase.

The annual state payment to SERS is projected to grow from $1.5 billion this year to $2.2 billion by 2022 before levelling off. The teacher pension fund, however, remains much more volatile.

The State Treasurer’s Office projected state payments to the Teachers Retirement Fund will likely grow from $1.3 billion this year to $3.2 billion by 2032 unless the state can pay off its pension obligation bonds and re-amortize the debt.

The pension and debt issue will continue to loom large for the new state government as Connecticut is projected to face $1.7 and $2.3 billion deficits over the next two years.

Fixed costs such as bonded debt and pension liabilities are projected to grow faster than revenue.

In the past, both Malloy and his budget chief, Ben Barnes, have noted that all the revenue from the 2011 and 2015 tax increases went toward pension liabilities.

Connecticut’s neighbor to the north did not fare much better in Truth in Accounting’s analysis. Massachusetts was ranked 46 because of its pension and retiree healthcare liabilities.