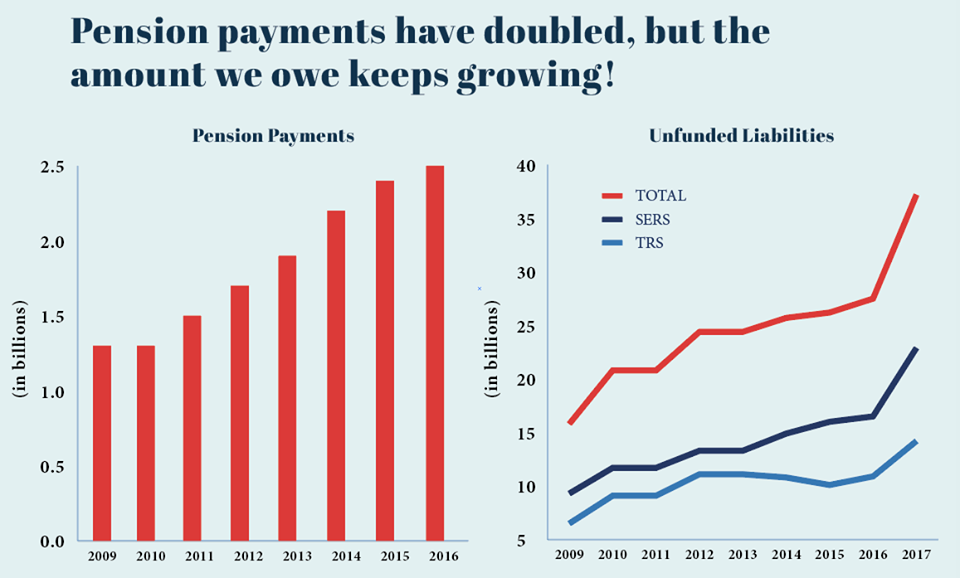 Connecticut’s pension crisis for its State Employee Retirement System has consistently been blamed on “decades of underfunding,” which is true… mostly.

Missing from the conversation is that in 1971 Connecticut passed a law which says the state must pay the full annual contribution toward its pensions and the unfunded liabilities by 1985. Connecticut was paying 100 percent of its annualized pension costs in the years leading up to Connecticut’s income tax.

If nothing had changed, Connecticut would not be trapped in the situation it is now. But Connecticut also allows collective bargaining agreements to supersede state law, allowing subsequent SEBAC agreements to once again underfund state employee pensions.

A 1992 agreement between Gov. Lowell Weicker and SEBAC not only reduced the state’s contribution toward pensions but extended the payoff period from 30 to 40 years at a time when the state was flush with new revenue from the new state income tax.

In exchange for underfunding pensions, unions were granted layoff protections and the creation of a placement and training fund, which allowed employees to avoid layoff when their bumping rights were exhausted, by training for placement at another state job.

The 1992 agreement was followed by an agreement with Gov. John Rowland in 1997. The agreement set into motion Connecticut’s current pension crisis, which threatens to bankrupt the state.

Rowland and SEBAC continued to underfund state employee pensions but also changed the way the state determined how it paid off the debt, switching from “level dollar” to “level percent of payroll” and once again extended Connecticut’s payoff period.

The change created a hockey-stick type scenario in which pension payments stayed small in the short term but grew rapidly in the long-term.

Scott Shepard, director of policy and research at Yankee Institute, says both politicians and union leaders should have known that underfunding and calculation changes would lead to big problems down the road.

“They should have known and almost certainly did know,” Shepard said. “If you pay your mortgage like a balloon mortgage rather than a 30-year fixed, then you end up owing a lot of money at the end. If you extend your mortgage from 30 years to 40 and beyond, you end up paying far, far more overall for relatively small cuts in monthly payments at the beginning.”

While 63 percent is not good, it is far better than today, when SERS is 36 percent funded.

Connecticut also used a high “discount rate,” which allowed the state to fund less money toward state employee pensions because it assumed an overly-optimistic rate of return from the market.

Shepard says both union leaders and politicians had a mutual interest in pleasing voters and union members by delaying the difficult job of fully funding the pension system.

“Politicians wanted to underfund pensions so they could keep their taxes low and please their constituencies,” Shepard said. “Union leaders were willing to agree to underfunding so they could take the promises of benefits back to their members.”

Today, SERS has amassed $20 billion in unfunded liabilities, according to the 2017 state valuation. Taxpayers are on the hook for $1.5 billion per year, the equivalent of Connecticut’s yearly transportation spending.

State employees have also had to increase their contributions toward the pension system over the course of SEBAC negotiations in 2011 and 2017.

The Malloy administration paid the fully required annual contribution throughout his tenure, and switched to a level dollar valuation and lowered the discount rate in 2017.

However, Malloy’s agreement with SEBAC in 2017 extended the state’s benefits contract — signed by Gov. Rowland in 1997 — until 2027, meaning that reforms to the system can only be made through further negotiations with SEBAC.

None of these figures include Connecticut’s substantial teacher pension debt, which is projected to grow much more than SERS, or Connecticut’s retirement medical benefits, which were not funded at all until 2015.

The rising cost of those pensions are one of the main drivers of Connecticut’s projected budget shortfalls of $4.5 billion in the next biennium.