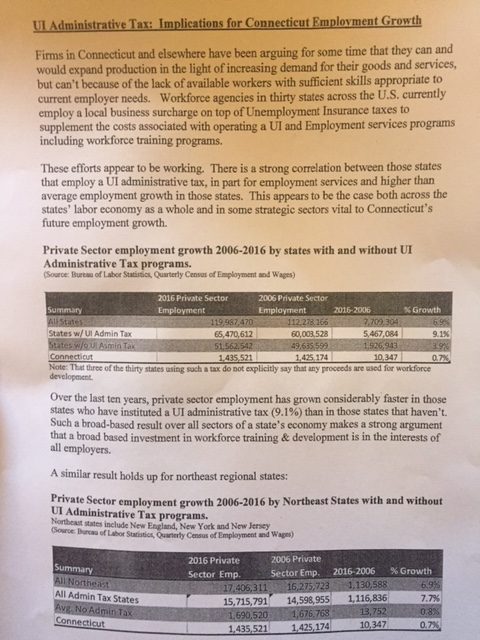 The Connecticut Department of Labor has been passing around hand-outs to lawmakers touting a new administrative tax meant to fund DOL’s staffing costs as a way to grow Connecticut’s economy.

The DOL proposed a small business tax earlier in the year as a way to fund the department’s staffing needs with an additional $9 million. Even though the DOL has fewer staff than previous years, their costs keep rising due to fringe benefits and less federal funding.

The handout claims that states with the administrative tax have seen 9.1 percent higher job growth and implies that maintaining adequate staffing levels at DOL will help fill Connecticut manufacturing jobs with training and placement for people who are unemployed.

DOL says that without the new tax their ability to provide these services would be curtailed and “our integrity efforts would end.”

But Peter Goia, Vice-President and Economist for the Connecticut Business and Industry Association, says the DOL’s facts and argument “ultimately mean nothing because their basic premise is wrong.”

Jobs in the aerospace industry — and manufacturing in general — often require specific skill sets and training.

Goia pointed out that Connecticut Department of Economic and Community Development already has programs to train and place skilled workers in manufacturing jobs and “they spend a lot more than $9 million to do it.”

CBIA has said for several years that Connecticut’s manufacturers have more job openings than qualified job applicants. In response, companies like Electric Boat, which manufactures submarines for the United States Navy, created a job-training pipeline to fill up to 14,000 jobs over the next decade.

The pipeline is managed by the Eastern Connecticut Workforce Development Board in collaboration with the U.S. Department of Labor, the Connecticut DOL, the DECD and the state’s technical high schools.

Goia says that 9.1 percent increased job growth for states with a UI administrative tax has little basis in reality when it comes to job growth in those states.

Connecticut’s job growth has been anemic compared to other states whether or not they have a UI administrative tax.

The DOL’s administration of unemployment insurance and unemployment claims has been a sore spot for business owners in the past, who say the program is unfairly stacked against them.

When Torrington-based manufacturer Borgeson Universal left Connecticut for South Carolina they specifically cited the DOL awarding unemployment insurance to an employee fired for threatening a supervisor with physical harm.

In an op-ed for the Journal Inquirer, Borgeson Universal owners Alan and Gerald Zordan said their treatment by the DOL was “the final straw,” in their decision to leave.

So it may come as little surprise that business owners oppose a tax — any tax, no matter how small — to fund a state department they feel is increasing their regulatory burden.

“If they need $9 million they should go through the budget process like everyone else,” Goia said, “or else look at their own budget.”

This article was updated with comments from the Department of Labor