With the state facing a $3.5 billion budget hole and the legislature unable to reach a budget agreement, Gov. Dannel Malloy put forth a revised budget which offers a mix of smaller tax increases and municipal cuts.

The governor’s “compromise” budget offers some mandate relief to municipalities but would require towns to pay a portion of teacher pensions, albeit less than his original budget proposal.

Although Malloy said he doesn’t want to lead with raising revenue, his latest budget proposal does raise taxes directly through an increase to the sales tax and indirectly through municipal aid cuts that will likely mean higher property taxes in some towns.

The union concessions deal negotiated by Gov. Malloy and narrowly passed by the legislature, included a four year no-layoff pledge, which means the state cannot shift services to nonprofits or make other money-saving reforms. It also locks in costly pension and healthcare benefits. 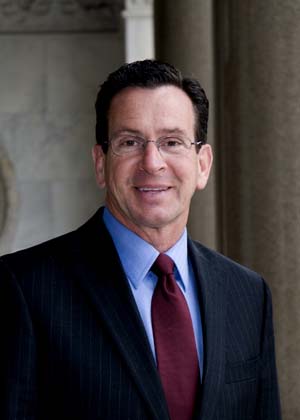 That means cuts in spending will fall on municipalities. Malloy has said that he would look to save the state money by reducing the amount of municipal aid to towns and cities across the state.

Malloy still wants towns to contribute toward the soaring costs of teacher pensions, but lowered the amount municipalities would need to contribute from $408 million in 2018 to $315 million. The amount would then decrease to $231 million.

This could mean higher property taxes for municipalities, particularly those which would see a big reduction in state education funding.

The governor’s budget does offer some mandate relief to towns, including increasing the prevailing wage threshold for municipalities, reforming binding arbitration and allowing towns to negotiate employee contributions into the Municipal Employee Retirement System.

Municipal leaders have long said that towns could save money through these reforms, but whether they will be able to save enough to offset the added costs of teacher pensions and the reduction of sales tax revenue remains to be seen.

But the tax increases would not only stem from cuts in municipal and education funding.

Connecticut’s traditional sales tax holiday would be eliminated under the governor’s proposal.

Real estate conveyance taxes would be increased and the sales tax exemption for certain nonprescription drugs would be eliminated.

The governor’s budget also offers some tax reforms – namely raising the estate tax threshold to match that the federal level. In the past, critics have pointed out that Connecticut loses wealthy individuals to states which do not impose an estate tax. This year bills were proposed by both Republicans and Democrats to raise the estate tax threshold to match the federal level. Republicans also introduced a bill to eliminate the state’s gift and estate tax.

The governor’s budget would reduce the insurance premium tax, which would result in $22 million in savings for Connecticut’s insurance industry.

Lastly, hospitals would once again bear the brunt of a state tax system that was meant to garner more federal Medicaid dollars.

The governor’s original budget would have allowed communities to impose property taxes on hospitals, a move that many community hospitals said would leave them insolvent. Under the compromise budget hospitals would see their taxes increased by an additional $274 million.

The governor claims the hospitals will be reimbursed for those tax dollars through federal Medicaid funding, but the state has a history of breaking that promise and using the Medicaid money for filling budget deficits.

This year, hospitals will pay $556 million in taxes but receive back only $117 million from the state in Medicaid reimbursements.

Malloy’s new proposal does not raise the sales tax as much as the House Democrats’ budget proposal but makes larger municipal funding cuts and still requires towns to pay a portion of the teacher pension costs, something that municipal organizations have fought against.

Earlier in the year both Senate and House Republicans put forward budget proposals which relied on labor reforms and savings to reach a balanced budget without raising taxes, but Democratic leaders in both the House and Senate refused to bring the proposals up for a vote.

If a budget agreement cannot be reached by October 1, 85 Connecticut towns will lose all of their state education funds and another 54 would be significantly reduced under executive order by the governor.