Connecticut consistently in the red, according to study by Pew

Connecticut spent more money than it took in for 10 out of 14 years, according to a long-term state analysis by Pew Charitable Trusts.

The study analyzed state data from across the country between the years of 2002 and 2015 to determine which states take in enough money to cover their expenses.

Overall, Connecticut was one of only eleven states that were consistently in the red because they “carried forward deferred costs of past services, including debt and unfunded public employee retirement liabilities, which could constrain their future fiscal options,” the report said.

Connecticut was one of the worst in the nation, taking in, on average, only 97 percent of the funds needed to cover expenses, while the national median was 102 percent. 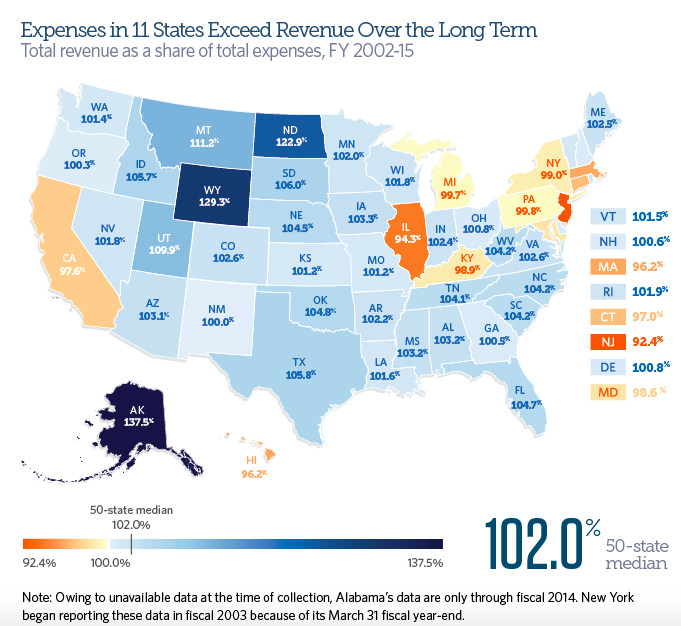 New Jersey, Illinois and Massachusetts all ranked below Connecticut in terms of meeting their obligations on a year to year basis.

Author of the study, Matt McKillop, says that most states can withstand a few bad years, and can turn to “a mix of reserves, debt and deferred payments on its obligations to get by.”

However, “chronic shortfalls – as with New Jersey and Illinois each year since at least 2002 – are one indication of a more serious structural deficit in which revenue will continue to fall short of spending absent policy changes.”

The analysis of Connecticut’s revenue showed a few revenue booms, but mostly busts for the state. Connecticut’s worst year was 2010, when it only took in enough revenue to cover 87 percent of its expenses.

Connecticut’s top performing year was 2015, when the state took in 110 percent of expense costs, following the imposition of two major tax increases in 2011 and 2015.

But Connecticut’s consistent inability to consistently take in enough revenue to cover spending has caused the state to use up most of its reserves, raise taxes and increase borrowing.

Connecticut drained half of its meager rainy day fund at the end of FY 2017 in order to solve $107 million deficit after a drop in income tax revenue left the state struggling to meet its obligations. The state used the rainy day fund to cover a deficit the previous year as well.

A prior study by Pew showed Connecticut has a highly volatile tax revenue stream, resulting in big swings that can leave unpredictable deficits.

In 2017 the projected budget deficit grew from $1.5 billion to more than $5 billion, largely due to lower income tax revenue from the wealthiest residents. Connecticut’s high earners are largely concentrated in the financial industry, which fluctuates with the markets and can produce different much different outcomes year-to-year.

Connecticut has also been borrowing more in recent years. According to a 2016 study, Connecticut’s bonded debt grew 39 percent over seven years. Debt service payments for 2017 were $1.7 billion, according the state comptroller’s website.

Connecticut’s bond rating was downgraded by the three major rating agencies during 2017.

Some of the borrowing includes agency fees, which pays for state employees at various agencies to oversee the bonded projects, essentially using borrowed money to pay for the state’s operations.

Debt service, along with pensions and retiree healthcare, are three of the growing “fixed costs” that are contributing heavily to budget deficits.

According to the study by Pew, state that turn to borrowing and reserves to meet consistent shortfalls show signs of “serious” structural deficits and will continue to experience the same problems.