In a series of impassioned speeches, community and organization leaders made the case for school choice and better options for parents living in Connecticut’s cities.

Gwen Samuel, head of Connecticut Parents Union, hosted Creating Opportunity for Every Child as part of Black History Month. Samuel said school choice means “that, as a mother, I should have the right to do what is best for my children and all children. That is what choice is.”

Held at the Phillips Metropolitan CME Church in Hartford, the speakers were unanimous in their belief that parents need to be empowered to make the decisions on their children’s education.

Former Georgia Rep. Alisha Thomas Morgan, said many communities suffer from the “disease of complacency,” and urged people to get involved in local politics. 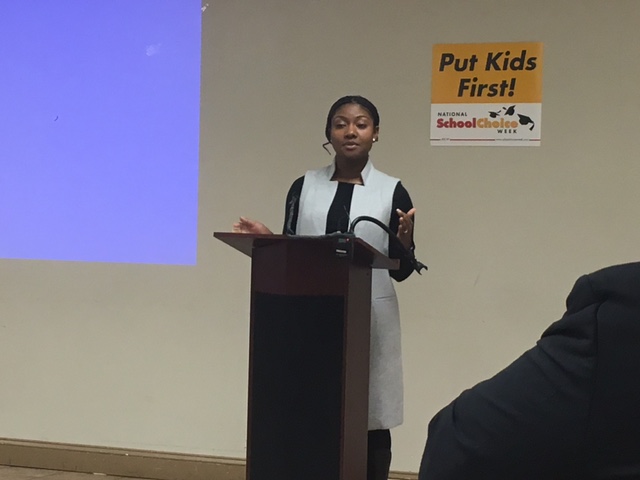 Morgan related how she became involved in politics through the NAACP and went on to become a very young Democratic state representative. Morgan said throughout her political training she was taught “to hate charter schools, to hate vouchers, to only do whatever the teacher’s union said to do.”

However, when she visited a charter school and saw the work being done, she suddenly became an advocate for greater school choice in Georgia.

Andrea Comer of the CBIA spoke about the link between education and economics, saying that past and recent economic downturns have created a “dual economy in which the rich get richer and the poor get poorer.”

“Education in urban communities has reinforced this condition by not evolving in a way that meets these economic needs.”

Comer emphasized the need for employment oriented education which focuses on job skills essential to STEM jobs, healthcare and manufacturing. “We know that money isn’t always the answer.” Comer noted that Hartford public schools get more funding than any other district in the state but have low academic achievement. “It’s not about the amount of money but what you do with it.”

Coleman was presented with a gift and took pictures with the other speakers and attendees. Coleman said he has “no regrets” about his 34 years of service in the General Assembly except that he “couldn’t please all the people all the time.”

“But I don’t regret being crazy enough to try to please all the people all the time,” he said.

Speaking after the conclusion of the event, Morgan said that school choice is really about “empowerment” and “engagement” for parents. “Adults need to put the politics and the agendas aside,” she said. “That’s when we’ll see change.”

Waterbury kids to have scholarship opportunity as nonprofit foundation grows

By Marc E. Fitch February 24 , 2021 Education
Waterbury children will now have the opportunity to receive a partial scholarship to a private or parochial school of their…
Read More