The Cato Institute released its ranking of states based on personal and economic freedom, which placed Connecticut in the bottom ten states in the nation. Connecticut dropped to 45th in the country – one spot lower than the previous 2014 ranking. The Cato Institute performs the ranking every two years and factors in personal freedom – such as marriage laws, drug and alcohol prohibitions, incarceration and gun rights – and state fiscal and regulatory policy. 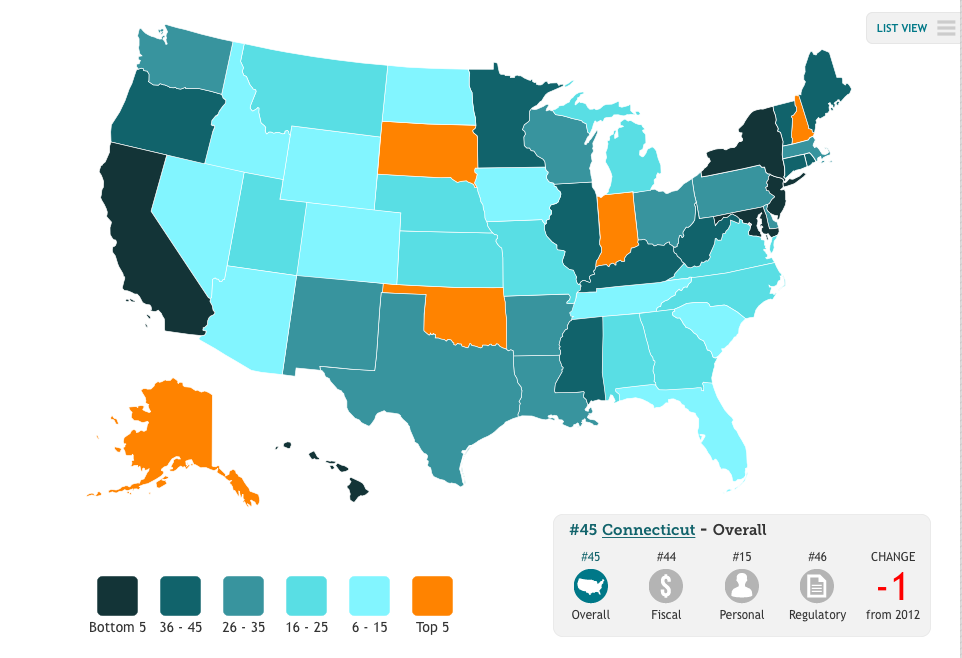 Although Connecticut ranked 15th for personal freedoms, Cato’s analysis of the state taxes and regulatory burden dropped Connecticut 30 rankings. According to the study, “Connecticut has become one of the least economically free states in the Union, even as it enjoys more than the average level of personal freedom.”

Factored into the analysis of Connecticut’s fiscal health is the state’s heavy taxes and its regulation on business. It also cites exclusionary zoning practices as affecting personal freedoms in the state.

William P. Ruger, co-author of the study, said that although taxes are necessary for a “civil society,” taxes in some of the states, including Connecticut, have become unnecessarily burdensome. “It is no longer that taxes fund the necessary functions of government but have gotten to the point that they actually make it difficult for individuals to thrive and support their families.”

He also discussed occupational licensure laws: “Every state has licensing for doctors. That’s a necessary safety issue that everyone agrees on. But some state have professional licensing that has nothing to do with public safety and instead acts as a barrier to people entering the workforce and supporting themselves.”

Connecticut requires state licensure for a myriad of different professions, including barbers and interior designers.

Among the institute’s recommendations was to lower personal income taxes and restrict “the ability of local communities to impose building limits, minimum lot sizes, and other mechanisms of racial and income exclusion.”

Connecticut ranked one point lower than Illinois but fared better than New York, which was dead last. Massachusetts was ranked 33rd in the nation. The top spot for freedom, according to Cato’s study, is New Hampshire.

Although the study was just released Monday, the rankings are based on 2014 data. The Cato institute ranks the states every two years.

**This article was amended to include comments from William P. Ruger, co-author of the Freedom in 50 States 2015-2016 Study**