Inside Connecticut’s attempt to shred the red tape

At the Department of Transportation’s training facility in Newington massive sheets of paper are taped to the walls and lined with blue painter’s tape and dotted with multi-colored post-it notes and cut-out paper stars. In the room are perhaps ten employees with the Office of Early Childhood Development. There is a table with snacks of Goldfish crackers and bottled water.

This is a Kaizen training session, part of Connecticut’s LeanCT program aimed at making government more efficient. Lean Program Management began in the United States in the 1980’s in an attempt to mimic Toyota’s successful business model. The aim is to create “customer value” while eliminating waste.

Groups from three different state agencies work in different rooms with a leader from Leanovations, LLC, a company hired by the state to train employees in the Lean Management program. Each department that undergoes Lean training evaluates a single process within the agency at a time, so as not to be overwhelmed. Instead the program takes small bites out of the bureaucracy over time. 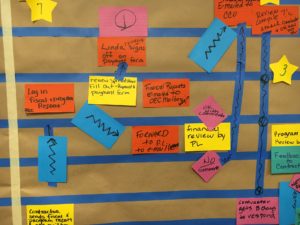 The post-it notes on the papered wall are meant to show the various steps in a process. In this case the OECD was looking at the process of receiving, approving and filing contracts and financial statements from various nonprofit agencies. The idea is that by laying out all the various obstacles that have been built into the bureaucracy over the years, the employees will find ways to cut out what isn’t needed.

The red tickets indicate an unnecessary step. A couple are marked “This does nothing!” 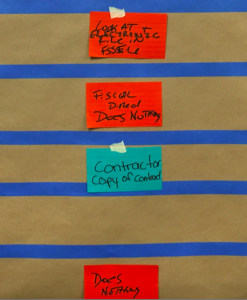 “No one wants to be a red ticket,” says Michael Bright, a DOT employee and a LeanCT trainer.

The training also brought in the nonprofit contractors to meet with the OECD employees to get their input as to how processes can be streamlined.

However, it remains to be seen if such increases in efficiency will result in any real cost savings. Just because an employee may have a red ticket as a major part of his or her job does not mean they will be eliminated. “Its not meant for eliminating people,” Bright says. “But as people retire we may be able to consolidate certain positions.”

Alison Fisher, who coordinates the LeanCT program with the Office of Policy and Management, says that success with the program is not measured in traditional return-on-investment savings. “You can’t measure productivity that way,” Fisher said. “We look at it as how much time is used to complete a process before and how much time it takes now.”

“A lot of our measurement has to do with minutes, hours, weeks – productivity time that’s been saved that can now be used by the staff to focus on mission-critical activity and not be so bogged down by bureaucracy.”

Leanovations, LLC is one of five companies hired to help put Connecticut on the Lean track and received $138,800 in FY 2015 for its services. State agencies are allowed to pick and choose which company they want to work whose expertise best suits their needs.

The training itself is peppered with buzz-words and phrases; “garbage in, garbage out,” “don’t reinvent the wheel,” and “teamwork, training and technology.” The state employees seemed enthusiastic at being able to cut through some of the red-tape that often makes their jobs more difficult.

As technology has improved, government has often not kept up. Some of the solution ideas in the Kaizen training session involved replacing hand-written signatures with electronic signatures. Agencies are supposed to streamline the process before adding new software or technology to the mix otherwise IT merely replicates the process problems.

Bob Emiliani is a Lean management specialist and blogs extensively on the training. He believes Lean management will be beneficial for the state but was critical of Governor Malloy’s claim in January that the state’s workforce was “about a 1000 positions smaller.” Emiliani writes “I am reasonably certain that no state employee has lost their job due to Lean.”

Although this program may represent a step in the right direction, it also comes on the heels of previous attempts to cut waste from government with pop-culture business strategies. As recently as 2004, Connecticut was engaged in Total Quality Managment and Quality Assurance. TQM eventually was replaced by Lean Management across the business world and in the state of Connecticut.

“The ideology behind it is that it is continuous, it never stops,” Fisher said. “So when an agency says they have leaned something, it means that they’ve examined one process they oversee and removed as much waste as they could during that initial analysis. Sometimes a process will have to be looked at several times.”