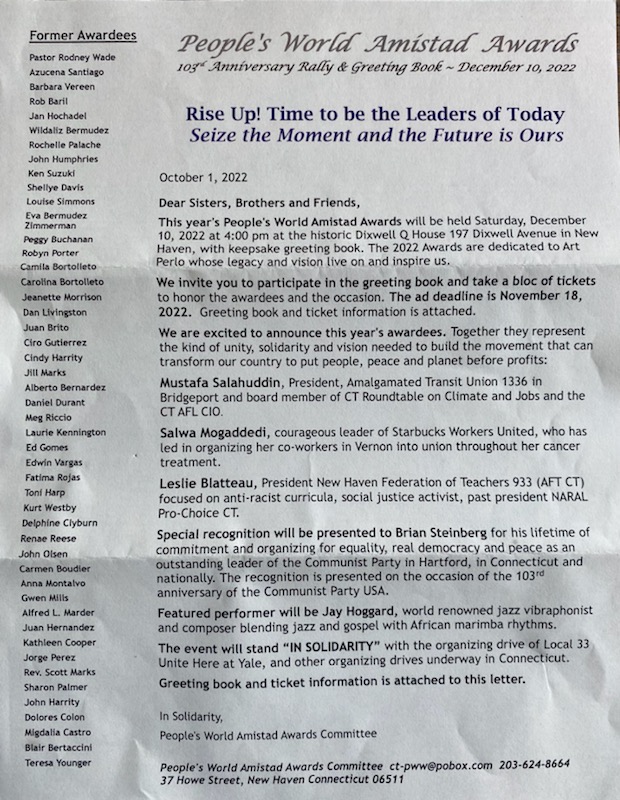 The Connecticut People’s World Committee, a progressive and socialist advocacy organization, will honor members of various unions at its annual People’s World Amistad Awards, Dec. 10. The awardees represent the “kind of unity, solidarity and vision needed to build the movement that can transform our country to put people, peace and planet before profits.”

Additionally, the event will recognize Brian Steinberg for his “lifetime of commitment and organizing for equality, real democracy, and peace, as an outstanding leader of the Communist Party in Hartford, Connecticut, and nationally.”

This year’s theme is “Rise Up! Time to be the Leaders of Today. Seize the Moment and the Future is Ours,” recognizing the 103rd anniversary of the Communist Party USA’s founding.

This is not the first-time union officials have been presented with this award. Jan Hochadel, president of the American Federation of Teachers Connecticut Chapter, Shellye Davis, executive vice president of CT AFL-CIO, and Rob Baril, president of Service Employees International Union (SEIU) 1199NE, are just a few past honorees.

Last year’s award ceremony gained national attention when Sen. Richard Blumenthal (D-Conn.) joined the program as a surprise guest to congratulate and present award winners with certificates of special recognition from the U.S. Senate. Winners included State Senator Julie Kushner, D-Danbury, Pastor Rodney Wade of Waterbury, and SEIU activist Azucena Santiago. After receiving backlash for his appearance, Sen. Blumenthal claimed he was unaware the event was linked to the Communist Party, adding that he would not have attended if he had known.

The Democrat senator did support Starbucks’ Vernon employees vote to unionize led by Mogaddedi this past July.

The event will be held at Dixwell Q House. Guests are required to prove their vaccination status before joining the festivities.

****Andrew Fowler contributed to this article.