Preliminary estimates from the federal Bureau of Economic Analysis found personal income in Massachusetts averaged $82,475 per person in 2021, beating out Connecticut at $82,082.

Connecticut had held the top spot since 1987, when it edged out resource-rich Alaska.

Adding insult to injury, Massachusetts’ growth since the Great Recession wasn’t exceptional. Its per-capita personal income rose about 62 percent, only slightly ahead of the national rate of 61 percent. 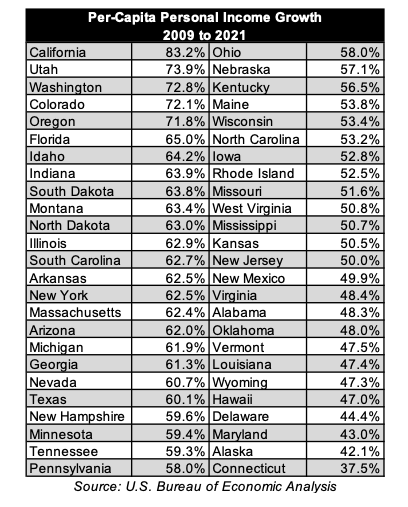 Massachusetts and Connecticut have notably taken divergent paths over the past half-century on questions of tax policy: Massachusetts in 1980 overhauled its local property tax system and capped the rate at which taxes could rise. The state levies a flat income tax, meaning each dollar is taxed at the same rate. The rate was trimmed from 5.85 percent to 5 percent between 2000 and 2020.

Connecticut, on the other hand, has not adopted restrictions on property tax growth and generally ignored the biggest cost-drivers behind them. The state adopted an income tax in 1991 and hiked rates four times between 2003 and 2015—that is, when Massachusetts was working to cut its own.

To be sure, tax policy isn’t the end-all-be-all of an area’s economic health. But given that Massachusetts and Connecticut are neighboring New England states with similar industrial histories and demographic profiles, there are fewer variables that can explain why recent outcomes have differed so much.

Put another way: no one can blame the cold winters this time.