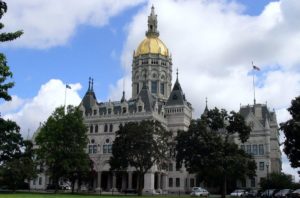 A proposal in the Connecticut General Assembly’s Energy and Technology committee would apply a “community access support” charge to Netflix, Hulu, Disney+ and other streaming video services by making them subject to the surcharge now added to cable television bills.

The bill (SB278) would extend the charges, which range from about $5 to $11 per year, to people who purchase streaming services but not cable television.

The share of U.S. households getting television programming from a cable or satellite service slid from 76 percent in 2015 to 56 percent in 2021, Pew Research estimates. With more people opting for “cord-cutting,” or getting their video programming over the internet, funding for “public, educational, and government access” to slide by about $1.3 million or 21 percent since 2016, according to the state Office of Consumer Counsel. The funds are turned over to local community groups to support public access programming at the state’s roughly 38 public access studios.

The original rationale behind the charge was essentially that cable companies benefit from public rights-of-way and in some instances have state-sanctioned monopolies, and that public access television would perform a public service.

Looking at the strongest argument for taxpayer-supported public-access television—that it’s needed to televise governmental proceedings—the novel coronavirus pandemic showed how much less of an undertaking this has become in recent decades. Local officials used YouTube, Zoom, Facebook and other services to webcast meetings and hearings, often at little or no additional cost to taxpayers.

And generally speaking, the technology needed to produce local video programming is increasingly accessible. Many if not most Connecticut residents can broadcast video from their mobile phones. Post-production editing is easier than ever thanks to the advances in processors, memory, and graphics cards in typical personal computers.

The bill meanwhile presents a practical challenge: if households are supposed to pay just once but subscribe to multiple services, which company is responsible for collecting it? Streaming services are becoming almost too numerous to list. One of the great parts about the streaming boom is that consumers can pick from services hosted anywhere in the world. Connecticut regulators could find themselves racking up manhours haranguing a new company on the other side of the planet over $5.

SB278 would go further still and apply to the charge to anyone who buys “Internet access.” It’s not clear how the law would differentiate between wired and wireless internet services, which are otherwise treated separately under state law. Taxing internet access would likely run afoul of 2016 federal legislation that forced six states to phase out similar taxes and preempted others from imposing new ones—and would go against the state’s purported goal of extending broadband access to every resident by the end of 2022.

But in a state where politicians routinely complain about the costs of essentials ranging from health insurance to housing—and then call for taxing them more—anything is possible.