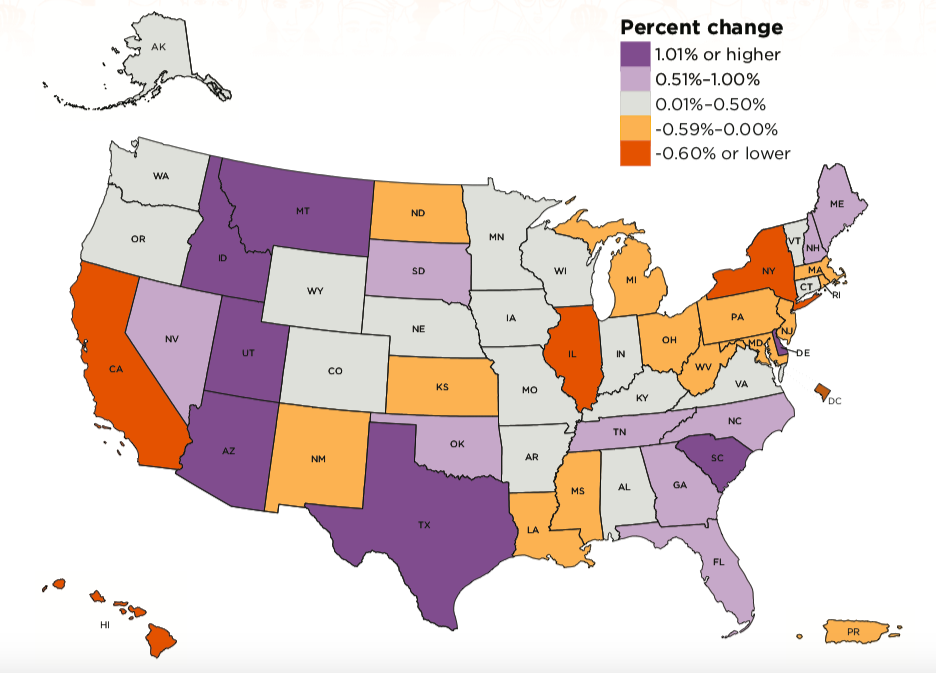 Reports from both lawmakers and real estate agents indicated that during the COVID-19 pandemic of 2020 and 2021, scores of wealthy New Yorkers fled the city and bought up homes in Connecticut, but numbers from the U.S. Census Bureau show mixed results for Connecticut’s overall population.

Net migration into the state during that period was 5,222, with almost all of that coming from international migration and being offset by 6,113 more deaths than births, known as the “natural increase.”

However, when measured over a twelve-month period from July of 2020 to July of 2021, Connecticut saw a population increase of 5,337, with domestic migration outpacing international migration and the influx of new residents surpassing the net loss of 4,975 people due to deaths.

This was the first time since 2010 that the Census Bureau found more people moved into Connecticut from elsewhere in the United States than left. Net domestic migration between 2011 and 2020 averaged -21,947.

But the three months between April and July of 2020 appear to have had a big impact on Connecticut’s population numbers.

The overall net domestic migration for Connecticut during the fifteen-month period beginning in April of 2020 was 226 people, meaning that Connecticut lost almost as many residents to other states during the onset of COVID-19 as it gained throughout the twelve-month period from July 2020 to July 2021.

Throughout the course of the pandemic, real estate agents indicated they saw record demand for property in Connecticut with well-off individuals and families, largely from New York, offering cash for houses well above asking price.

Lawmakers also saw this as a moment when Connecticut would turn the tide of perpetual population loss, with Gov. Ned Lamont saying an influx of taxpayers would be good for state government’s bottom line during an October 2020 news conference.

But the overall result is mixed. Those moving into Connecticut likely had ample spending power, which could bring increased income tax revenue to the state, but for nearly every house sold and every new resident, Connecticut also saw someone move out resulting in an overall flat population trend during the pandemic.

Other states saw massive decreases in population during the same fifteen-month time period, with New York losing 365,336 people in total with 407,257 more people leaving New York for other states than coming from them. California and Illinois also topped the lists for total population loss.

According to the Census Bureau, the United States saw its lowest rate of population increase in the nation’s history at .1 percent, which they attributed to lower international migration, decreased fertility and increased deaths due to COVID-19.

“Population growth has been slowing for years because of lower birth rates and decreasing net international migration, all while mortality rates are rising due to the aging of the nation’s population,” said Census Bureau Demographer Katie Wilder in a press release. “Now, with the impact of the COVID-19 pandemic, this combination has resulted in a historically slow pace of growth.”