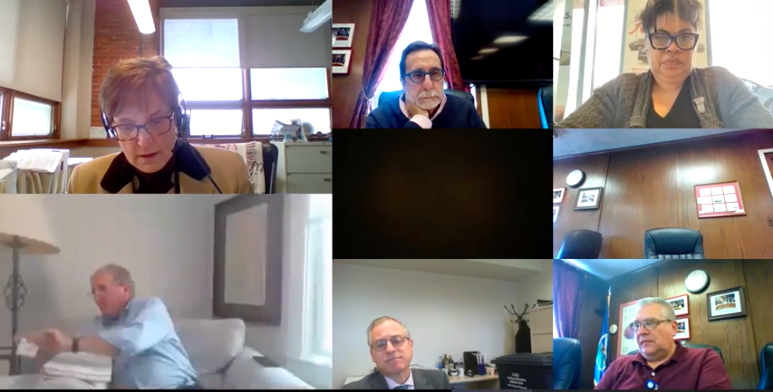 Some members of the Municipal Accountability Review Board overseeing West Haven expressed frustration at what they see as the city’s slow approach to implementing purchasing control policies after West Haven was defrauded of more than $600,000 in COVID relief funds by two of its own employees.

“Every month we listen to the same drill and nothing gets done,” MARB member Stephen Falcigno said during the December 14 meeting. “I hate to be the bearer of bad news, but we’re not gaining on this thing. We’ve already had a catastrophic event take place. I’m not saying it could have been avoided but certainly it could have been mitigated if what we’ve been talking about since I’ve been on this board — for well over two years — about basic business 101.”

“I don’t know any business, small, large or medium, that can function without controls and you still don’t have any controls,” Falcigno continued. “The controls are not in place. It’s a hope and a prayer, a wing and a prayer.”

The issue being discussed at the time was how the city verifies that work done by contractors or consultants is verified and confirmed, including ensuring that signatures by city department heads are verified.

City of West Haven Finance Director Frank Cieplinski said they are working on setting up the proper control policies but also said he doesn’t have enough people to chase down every invoice, leaving the job of ensuring the proper work was completed and proper amounts charged to department heads.

“I can’t fight a fire with a bottle of water and no people,” Ceiplinski said.

“We keep making excuses as to why these things aren’t done,” said MARB member Patrick Egan. “Last year and the year before that we’ve been talking about purchasing procedures, we’ve been doing it for the better part of three years – purchase orders, vetting things, preferred vendors – that was highlighted in the last two years’ audits, same thing.”

“This time last year, we were told there was going to be a procurement director in place in January of 21 and there still isn’t,” Egan continued. “The conversations we’re having now are the conversations we’ve had for the better part of two to three years.”

The City of West Haven found itself embroiled in a federal scandal when the Federal Bureau of Investigation arrested Rep. Michael DiMassa, D-West Haven, who worked for the city as an assistant, and John Bernardo, a housing specialist for the city.

The two are accused of creating a fake company called Compass Investment Group, LLC and then billing the City of West Haven $636,000 in consulting fees related to COVID mitigation. DiMassa was authorized to signed off on those invoices, according to reports.

The revelation was a bombshell for the city, which had been under MARB oversight since 2018. Mayor Nancy Rossi barely won her re-election bid against a Republican rival in the heavily-Democrat city and DiMassa quickly resigned from the General Assembly.

Kimberly Kennison, a MARB member designated by the Office of Policy and Management Secretary Melissa McCaw, said she could help the city find someone to draw up control policies and procedures.

“Then they’ll have a document that can be audited when the auditors come in and say here’s my process,” Kennison said. “Right now, they’re saying they don’t even have a process, it’s not even documented.” West Haven is currently undergoing a forensic audit by CohnReznick.

Falcigno suggested that West Haven seek help from neighboring municipalities like Milford or Shelton that are do a better job and managing their finances.

“These are your neighbors. It doesn’t matter if you’re Republican or Democrat. You guys have a problem. It’s a huge problem. You can’t control your money. And most important, you don’t know where it is. That’s even worse,” Falcigno said.

“All we’re doing is throwing good money after bad and nothing is getting done.”

*Meghan Portfolio contributed to this article*